From a software standpoint, the iPhone 3G is actually no different from last year’s iPhone - they run virtually identical OSes and both ship with the same applications. Once updated to the 2.0 firmware, you can’t tell the difference between using the OS on the iPhone 3G vs. on the original iPhone.

There are some physical changes between the devices, which I’ll get to shortly but I thought I’d go down a quick list of the things that made the original iPhone the phone I stuck with for the past year. If you already know this stuff, feel free to skip ahead:

The iPhone interface remains the best combination of simplicity, functionality and speed I have seen in any smartphone. Animations are smooth and fast, and the interface is just plain responsive. Since the physical interface is done mostly via the touchscreen, Apple needed something that responded very naturally, and honestly it’s nearly perfect. 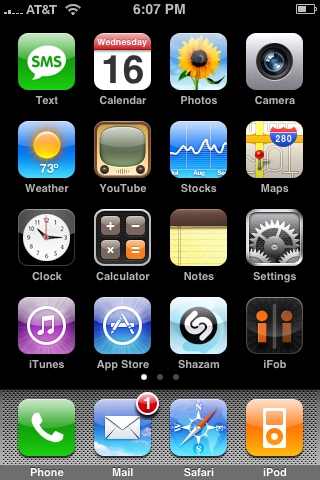 Much like Microsoft did with the advent of its Media Center interface, Apple took a step back and created a new UI that was suited for the task at hand with the iPhone, rather than attempting to adopt a foreign UI to a smartphone. As we’ve seen numerous times in the tech industry, there are limits to how far down you can scale something before it’s better to start from scratch.

The iPhone has four physical buttons on it: home, power, volume and a ringer switch. And that’s all you honestly need. The home button takes you home, the power button will turn your phone on/off, put it to sleep or silence an incoming call depending on how you use it, the volume rocker does what you think it would and the ringer switch lets you turn the ringer on/off.

Of all of the complaints I’ve had about the iPhone over the past year, I’ve never felt the need for more buttons. Apple got it perfect from the start.

The iPhone’s screen is a high dpi 480 x 320 screen with a large surface area, measuring 3.5” on the diagonal. It’s a multi-touch display that allows you to use gestures to navigate around. Zooming is done by placing your two fingers together on the screen and pulling them apart or the opposite by pinching them together. Flipping through photos is done by swiping your finger across the screen. You type and dial by tapping virtual keys, and the entire device responds as you would expect it to. This isn’t the sluggish touchscreen you may be used to, it’s the touchscreen from the starship Enterprise, it just works.

Minus support for Flash (which the iPhone still lacks), Safari for the iPhone is honestly the best web browsing experience you can get on a smartphone. If you’ve seen the videos of it in action, it works just like that. You can actually browse real, non-mobile websites just fine using Safari on the iPhone. Although the arrival of iPhone-optimized websites doesn’t hurt either. 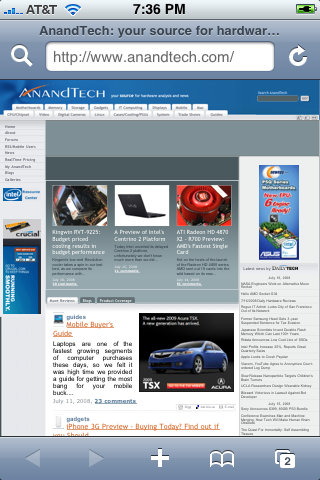 This just plain makes sense. You don’t dial in to hear your voicemail, it gets listed like emails in your Visual Voicemail tab. Listen to them out of order, delete them out of order, it’s one of the simplest but most useful features of the iPhone. It’s voicemail done right. 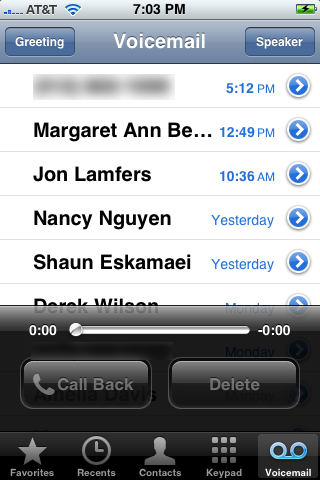 I was never a big texter until the iPhone. While typing on QWERTY smartphones wasn’t bad, the SMS interface was generally terrible. SMSes should have worked like conversations and in most phone OSes they were sent as individual messages, with no common log of history. 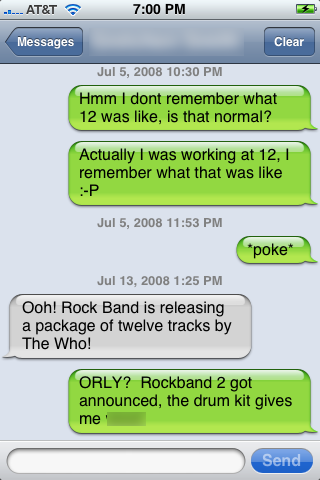 The iPhone changed that for me, the SMS interface was, and you may be noticing a trend here, just done right. Have a look:

It does Email and Plays Music Too

Like the rest of the features, the iPhone’s mail client is very fast and makes checking/responding to emails ridiculously easy - even easier than on my old Blackberry. The interface’s simplicity and quickness are key here. There were limitations for corporate email users with Exchange servers, but many of those issues have since been addressed as you’ll soon see.

Oh and it’s an iPod. Two devices in your pocket just became one.

There’s more to the iPhone but those were the key features from the first round with what many called the JesusPhone. So how is it even remotely possible that there hasn’t been a real iPhone competitor in the year since the original’s release? It would appear that Apple truly caught the incumbent mobile phone manufacturers by surprise with the iPhone.