We outlined AMD's "new" GPU strategy in our Radeon HD 4850 preview article, but in short AMD has committed to designing GPUs for the mainstream $199 - $299 segment and simply using CrossFire (multi-GPU) to address higher end markets. NVIDIA on the other hand will continue to make very large monolithic GPUs in order to continue to push the industry forward. Both approaches are appreciated and necessary, they simply target different markets.

In our GT200 review we highlighted the fact that NVIDIA had built an extremely large, highly parallel, microprocessor. With 1.4 billion transistors and a die size of around 576 mm^2, NVIDIA's GT200 is nothing short of huge. 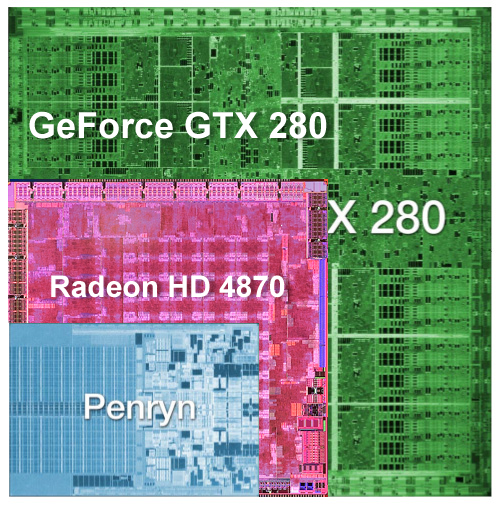 Based on what we know of NVIDIA's die size, this should be to scale

Even AMD's die, although designed to be svelte and affordable, is big - especially for being fabbed at TSMC. NVIDIA still holds the crown for largest die fabbed at TSMC, but AMD shows us that even a more mainstream approach still requires tons of transistors. As we mentioned in our 4850 preview:

"A pair of RV770s, AMD's new GPU, end up consuming more power than a single GT200 - despite being built on a smaller 55nm process.

A pair of these RV770s only costs $400 compared to $650 for a single GT200, but I suspect that part of that is due to differences in manufacturing process. If NVIDIA hadn't been so risk averse with the GT200 and built it on 55nm (not that I'm advocating it, simply posing a hypothetical), the cost differences would be smaller - if not in favor of NVIDIA since GT200 is built on a single card.

When the smoke clears, AMD's strategy is to simply build a GPU for the masses and attempt to scale it up and down. While NVIDIA is still building its GPUs the same way it has for decades, starting very large and scaling down.

We've got a lot of discussion on efficiency between AMD and NVIDIA coming up in this article, although AMD's die is noticeably smaller than NVIDIA's - as you've already seen with the Radeon HD 4850 - there are many areas where RV770 can go toe-to-toe with NVIDIA's mammoth GT200.