The last time we had a turn around like this was when NVIDIA launched the GeForce FX. NVIDIA gave us a weekend, Superbowl Weekend to be exact, to review its latest GPU back in 2003. History was bound to repeat itself, and this time it was AMD keeping us occupied all weekend.

We got a call earlier in the week asking if we'd be able to turn around a review of AMD's Barcelona processor for Monday if we received hardware on Saturday. Naturally we didn't decline, and as we were secretly working on a Barcelona preview already, AMD's timing was impeccable. 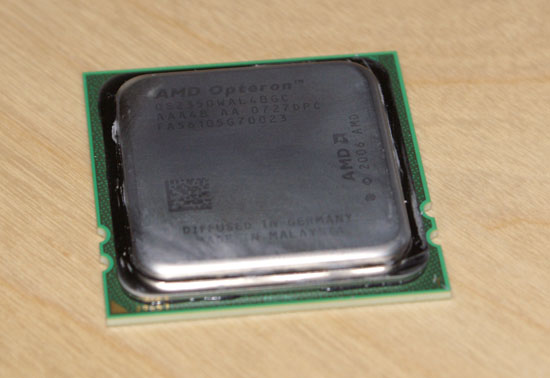 What we've been waiting for

AMD shipped us a pair of 2U servers a day early, we actually got them on Friday but being in Denver at CEDIA we couldn't begin testing until Saturday. Luckily, Johan had Barcelona in Europe for over a week by this point and was already hard at work on server benchmarks. I augmented Johan's numbers with some additional results on these servers, but I had other plans in mind for the Barcelona system that AMD was sending me.

We went from no Barcelona, to fist-fulls of Barcelona in one weekend

You see, we've known for a while that Barcelona was going to do well for AMD on the server side. AMD is far more competitive there than in the desktop market, mostly thanks to its Direct Connect architecture, something Intel won't be able to duplicate until the end of 2008 with Nehalem. Barcelona will improve clock-for-clock performance over Opteron and is a drop in replacement for Socket-1207 servers with nothing more than a BIOS update; the Enterprise world couldn't be happier.

Things are different on the desktop; AMD hasn't been competitive since the launch of Core 2 in the Summer of 2006 and we're very worried that even after Phenom's late-year launch, the market still won't be competitive. While that's great for consumers today, the concern is that a non-competive AMD will bring about a more complacent Intel, which we do not want. We want the hungry Intel that we've enjoyed for the past year, we want ridiculous performance and aggressive pricing, and we won't get that without an AMD that can fight.

But AMD won't tell us anything about how Phenom will perform, other than that it will be competitive with Conroe/Kentsfield. So the goal here today is to get an idea of exactly how much faster Barcelona (the same core that'll be in Phenom X4) will be compared to the Athlon 64 X2.

We'll have more Barcelona server content coming as we spend more time with the system, but be sure to check out Johan's coverage to get a good idea of how Barcelona will compete in its intended market. If you're not familiar with Barcelona/Phenom architecture, or if you're confused as to exactly what Phenom is here's some required reading before proceeding.