Most of the initial reviews of Apple's iPhone shared one complaint in common: AT&T's EDGE network was slow, and it's the fastest cellular network the iPhone supported.  In an interview with The Wall Street Journal, Steve Jobs explained Apple's rationale for not including 3G support in the initial iPhone:

"When we looked at 3G, the chipsets are not quite mature, in the sense that they're not low-enough power for what we were looking for. They were not integrated enough, so they took up too much physical space. We cared a lot about battery life and we cared a lot about physical size. Down the road, I'm sure some of those tradeoffs will become more favorable towards 3G but as of now we think we made a pretty good doggone decision."

The primary benefit of 3G support is obvious: faster data rates.  Using dslreports.com's mobile speed test, we were able to pull an average of 100kbps off of AT&T's EDGE network as compared to 1Mbps on its 3G UMTS/WCDMA network. 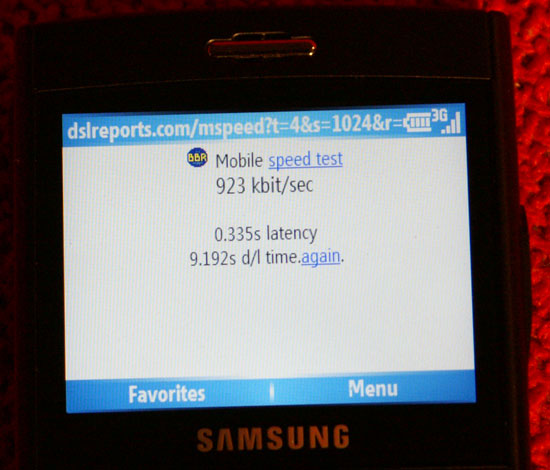 Apple's stance is that the iPhone gives you a slower than 3G solution with EDGE, that doesn't consume a lot of power, and a faster than 3G solution with Wi-Fi when you're in range of a network.  Our tests showed that on Wi-Fi, the iPhone was able to pull between 1 and 2Mbps, which is faster than what we got over UMTS but not tremendously faster.  While we appreciate the iPhone's Wi-Fi support, the lightning quick iPhone interface makes those times that you're on EDGE feel even slower than on other phones.  Admittedly it doesn't take too long to get used to, but we wanted to dig a little deeper and see what really kept 3G out of the iPhone.

Pointing at size and power consumption, Steve gave us two targets to investigate.  The space argument is an easy one to confirm, we cracked open the Samsung Blackjack and looked at its 3G UMTS implementation, powered by Qualcomm: 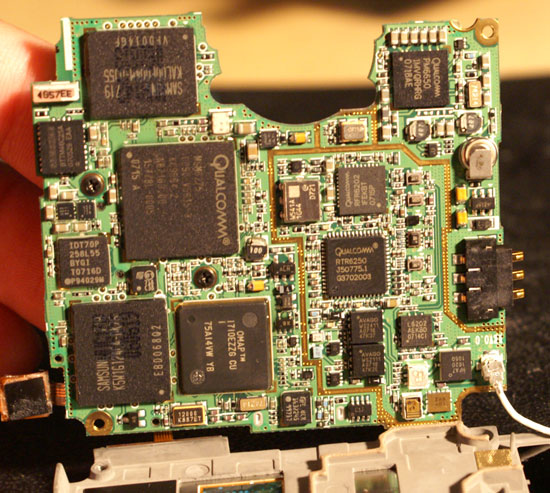 Mr. Jobs indicated that integration was a limitation to bringing UMTS to the iPhone, so we attempted to identify all of the chips Apple used for its GSM/EDGE implementation (shown in purple) vs. what Samsung had to use for its Blackjack (shown in red): 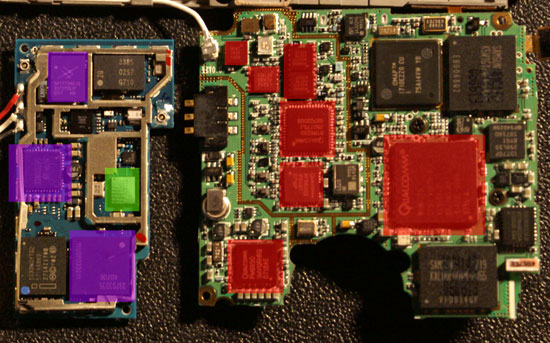 Motherboard Battle: iPhone (left) vs. Blackjack (right), only one layer of the iPhone's motherboard is present

The largest chip on both motherboards contains the multimedia engine which houses the modem itself, GSM/EDGE in the case of the iPhone's motherboard (left) and GSM/EDGE/UMTS in the case of the Blackjack's motherboard (right).  The two smaller chips on the iPhone appear to be the GSM transmitter/receiver and the GSM signal amplifier.  On the Blackjack, the chip in the lower left is a Qualcomm power management chip that works in conjunction with the larger multimedia engine we mentioned above.  The two medium sized ICs in the middle appear to be the UMTS/EDGE transmitter/receivers, while the remaining chips are power amplifiers.

The iPhone would have to be a bit thicker, wider or longer to accommodate the same 3G UMTS interface that Samsung used in its Blackjack.  Instead, Apple went with Wi-Fi alongside GSM - the square in green shows the Marvell 802.11b/g WLAN controller needed to enable Wi-Fi.

So the integration argument checks out, but what about the impact on battery life?  In order to answer that question we looked at two smartphones - the Samsung Blackjack and Apple's iPhone.  The Blackjack would be our 3G vs. EDGE testbed, while we'd look at the impact of Wi-Fi on power consumption using the iPhone.