Lower power consumption and cooler operation are both positive side effects of AMD's new 65nm process, the latter of which is exemplified by the graph below:

What we're looking at here is the core temperature of the 2nd core in all of the CPUs, under full load, as reported by Core Temp. While it's not necessarily useful (or accurate) to compare readings across two different motherboards, as is the case when looking at AMD vs. Intel, the comparisons between AMD chips alone are enough to showcase the reduction in temperature.

With both cores under load for 15 minutes (calculating Fast Fourier Transforms) the 65nm 5000+ manages to produce just about as much heat as the X2 3800+ EE SFF. While this won't always be the case, it gives you an idea of the reduction in temperatures you can expect from AMD's new 65nm chips.

What about overclockability? We were unfortunately not able to get that much more out of the new 65nm core as we could from mature 90nm chips. Our X2 5000+ was able to run at 2.925GHz, at 1.475V with stock air cooling. If equipped with better air cooling or something more exotic, reaching over 3GHz shouldn't be a problem, but we wouldn't expect to see anything too far over 3GHz. 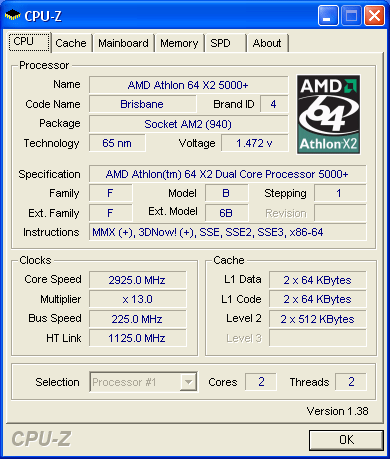 Overall we're left with mixed feelings after playing with AMD's first 65nm chips. Power consumption is definitely reduced compared to its 90nm offerings; in our tests we saw an average reduction in total system power consumption of 14.6W thanks to the new Brisbane core. Along with the lower power draw comes lower temperatures, which is also good. For no additional cost, and given that it should help alleviate AMD's capacity constraints thanks to a smaller die, there's nothing to complain about on that front.

However we would like to see more, and we have a feeling that it may end up being the 2nd rev of 65nm CPUs from AMD that truly interest us. Just as we saw with AMD's 90nm cores, it wouldn't be too surprising to see lower TDP parts emerge as AMD's process matures. We do hope to see an Energy Efficient line of X2s built on AMD's 65nm process, although it may take some time for AMD's manufacturing to reach the point where it can offer significantly reduced TDP 65nm parts.

The tweaks and advancements that AMD can do to make its 65nm parts more attractive can only go so far; while they will boast lower power consumption and improve production numbers for AMD, what we really need is a long overdue update to the K8 architecture. AMD has already promised it and we're expecting big things by the middle of next year, but in the mean time at least things will be a little cooler on the green side.