When Intel launched its Core 2 line of processors we saw AMD's performance and power advantages vanish into thin air but the comparison, at least on the power side, wasn't totally fair. Intel had been shipping desktop processors on its 65nm process for months prior to the launch of Core 2, while AMD's Athlon 64 X2s were still built on a 90nm process. We had no way of telling how much of Intel's power advantage was due to a more efficient architecture or simply smaller, cooler running transistors. Up to now, AMD has been penalized twice in all Core 2 vs. Athlon 64 X2 comparisons; AMD's new micro-architecture won't debut until next year and neither will 65nm in any great quantities.

Technically in-line with roadmaps, AMD just introduced and announced shipment of its first 65nm cores: codenamed Brisbane. Availability is another story entirely, as it's looking like we won't see any real quantities of these things until Q1 2007. Right now AMD's Brisbane chips are strictly OEM only and AMD wasn't able to give us an indication of when to expect retail/channel availability. Of course we wouldn't be talking about this today if we didn't have a chip, which we do, but for all intents and purposes you can consider this a preview of what to expect in the new year from AMD's first 65nm chips.

AMD announced its Brisbane lineup earlier this month, the chips and basic specs are listed below: 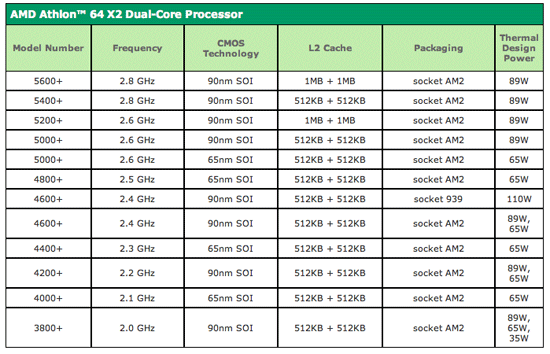 As you can expect, AMD is pricing the 65nm chips in line with its 90nm offerings to encourage the transition. Die size and TDP have both gone down to 126 mm^2 and 65W across the line. As AMD improves its 65nm SOI process you can expect to see even lower wattage parts, but for now all of the 65nm chips are rated at 65W TDP.

Transistor count remains unchanged at 154M as there is no new functionality or cache introduced with the move to 65nm. Once again, we will have to wait until around the middle of 2007 before we'll see any major changes to AMD's architecture. 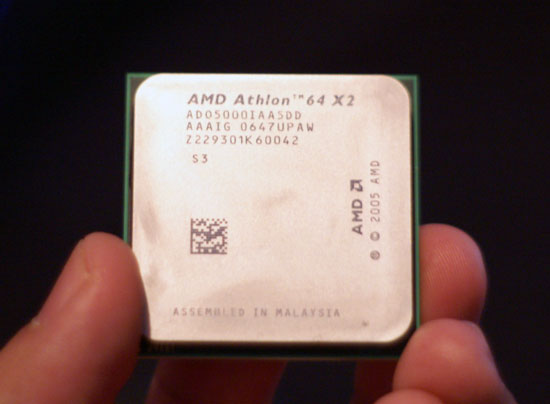 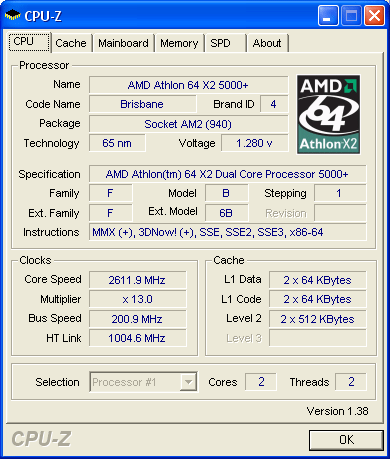 Armed with the chip and its $301 price point we set out to compare its performance, power consumption and power efficiency to AMD's other 90nm CPUs and the closest price competitor from Intel: the Core 2 Duo E6600 priced at $316.