Mushkin is a very well-known brand of Enthusiast memory. Most computer hobbyists know Mushkin for their web-based direct memory sales, based in Denver, CO. Direct sales have always been a large part of Mushkin's business, but today, you can buy Mushkin memory at Newegg and other web e-tailers as well.

Several months ago, Mushkin introduced their new Redline heatspreader. With large slots in the top of the heatspreader, it was designed to better dissipate heat than the older closed heatspreaders, which often caused higher temperatures than no heatspreader at all. 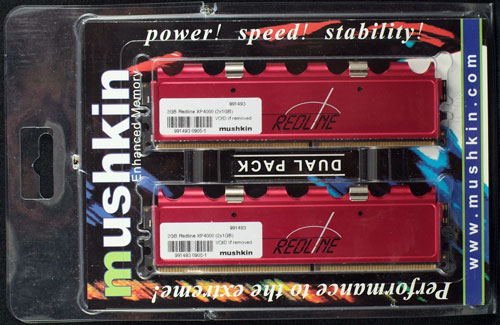 There's no mistaking that this is REDline memory; the fire engine red heatspreaders announce this loudly. Under the heatspreaders, you will find Infineon memory chips again, just like almost all the other memories in this roundup. Rated at DDR500, the memory chips used in the Mushkin Redline 2GB kit are Infineon C die, which has a wider overclocking range than B die.

Mushkin rates their DDR500 2GB Redline kit at 3-3-2 timings at DDR500. Those are exactly the timings that we would expect with Infineon C die memory.


Voltage is rated at standard 2.6V, so you will not need a board with super high vCore to get the most from these memory chips.

The performance of the Mushkin Redline was typically Infineon C, except it was always at the better end of expected C die performance. Mushkin managed DDR436 at CAS2, where some other Infineon chip memory requires CAS2.5. Even at the very top, the Redline ran with complete stability at 3-3-2 timings and never required more than 2.8V for best performance.

The highest overclock with Mushkin Redline was an outstanding DDR586 - the highest overclock of any Infineon based 2GB kit in this review. In fact, only the impossible to buy Crucial Ballistix could reach further. All-in-all, Mushkin Redline was a top performer, achieving the kind of performance and overclocking that will likely satisfy even the most jaded new user of 1 GB DIMMs. Mushkin, like OCZ in Part 1 of the 2GB kit roundup, makes the most of the memory chips used in their memory kits. Effective binning and good quality assurance pay off in a consistent, high-performing 2GB memory kit.