There are a few key changes from the original 7800 GTX silicon that allow the 7800 GTX 512 to perform so highly. The 7800 GTX 512 still uses a 110nm process like the original 7800 GTX, but NVIDIA has tuned their fab process to speed up key data paths in the chip. These enhancements, while not altering the feature set in anyway, allow the chip to reach clock speeds of 550MHz (which is 120MHz faster than the original 7800 GTX). On top of changes in the silicon, the 7800 GTX 512 has gotten a PCB revision. And just in case anyone is wondering, the huge HSF solution is actually very quiet. NVIDIA is using a fan with larger blades that move a good volume of air without needing to run at super high RPMs. While it may look like an industrial sized leaf blower, it bark is certainly nothing compared to the bite this thing takes out of our performance tests.

Current 7800 GTX cards feature 8Mx32 GDDR3 with four chips on each side of the PCB. Most cards have a heat spreader on the back of the board, while some vendors have attached heatsinks. NVIDIA needed a better way to cool their RAM in order to hit the memory clock speeds they wanted. To this end the 7800 GTX 512 sees all of its RAM on the front of the PCB cooled by the very large heatsink previously employed on the Quadro FX 4500. Moving all the RAM to one side of the PCB may also have improved the routing to certain memory modules, which would also help increase attainable stable memory clock speeds. There are still only 8 modules total, as NVIDIA has also moved to higher density 16Mx32 GDDR3. The RAM used is also rated at 900MHz (1800MHz data rate), giving the stock memory clock speed of 1700MHz a little head room for vendors who like to overclock the cards they sell.

Here is a quick comparison of NVIDIA's 7800 series line up with the new GTX 512: 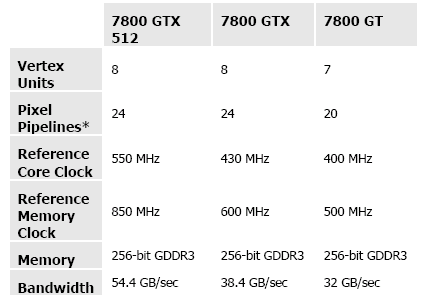 We can expect some applications to scale with either core clock speed or memory clock speed depending on where they are limited, in which case we could see anywhere from a 25% to 40% boost in performance. Of course, we will run into things like CPU and architectural limitations that could decrease the impact of the improved clock speed. As Intel found out via the Pentium 4, it doesn't matter how fast your clock spins if the chip spends a significant amount of time waiting on other hardware. This is where HyperThreading came into play, and is likely also the reason ATI put so much development time into keeping a huge number of contexts open at a time.

Slower architectures have the advantage of being less effected by latency as a long clock cycle time allows data to move further per cycle. At the same time, to compete with high frequency processing, much more work has to get done per clock cycle than a faster chip. Graphics tend to lend themselves to this type of architecture, which is partly why we haven't seen multiple-GHz graphics chips.

In any case, increasing core and memory clocks, framebuffer size, and adding a gigantic HSF will certainly require a little more power than the standard 7800 GTX. NVIDIA currently still recommends the same types of power supplies for the 7800 GTX 512 as it does for the 7800 GTX, but, as we can see from our tests, the 7800 GTX 512 does result in a much higher power draw from the wall. In fact, the outlets in our lab had some trouble getting consistent power to our PSU during SLI testing. Most people won't run into a problem like this unless they run quite a few PCs off the same circuit breaker at home. We actually had to solve our problem by running one of the 7800 GTX 512 cards off of a second power supply plugged into an extension cord running off of a different circuit. If nothing else, this setup could help people test for wiring problems in their homes.

These power numbers are measured at the wall before the PSU.

Let's take a look at the hardware we will use.

This is definitely a powerful system we will be examining today. For our benchmarks, we test with sound disabled. Most of these tests are timedemos played back using ingame functionality, but the Black & White 2 benchmark is a FRAPS test using an ingame cut scene. We will provide bar graphs for the very popular 1600x1200 resolution while reporting data from 1280x960 to 2048x1536 in resolution scaling graphs.