The ULi Reference Board 2 sports exactly the same features as Reference Board 1 with a couple of significant additions. Reference 2 supports a riser card to actually mount video cards in the two x8 PCIe video configurations that is a BIOS option on both boards. Furthermore, the two additional PCIe slots are x4 capable - supporting the option of x4 or x2 PCIe configuration available in the BIOS.


Despite the fact both Reference boards have essentially the same BIOS and features, Reference 2 has many physical changes. 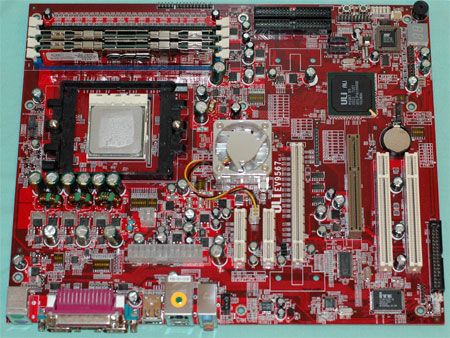 The most important is the addition of holes for card holder brackets to mount the riser card. 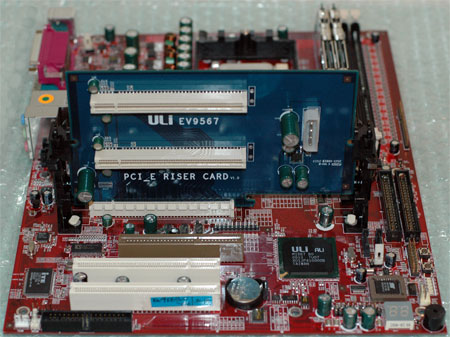 With the riser card installed, you can see how to mount two PCIe video cards sideways in the two x8 slots. It may look tight in the picture, but we had no problem at all mounting two NVIDIA 6800 Ultra video cards that were double-slot width.

The riser card and sideways slots allowed testing dual video and SLI on the Reference 2 board, but it is hardly a configuration that we would recommend for a production board. Our hats are off to ULi for a clever way to turn a single slot into two x8 and SLI, but this would be a very insecure mount and a space-waster on most boards. To ULi's credit, the two x4/x2 PCIe slots are still usable with the riser, but the AGP and all PCI slots are completely covered with the side-ways card mount.