For users looking for a premium-looking micro-ATX board, the ASUS ROG Strix B560-G Gaming WIFI is a fabled Gene'esq board in all but name; perhaps the G naming stands for Gene. Although not as high-end as Gene modes in the past, the Strix series offers gamers a more mid-ranged gaming experience, with consisting styling throughout. The design consists of a mainly black color scheme, with black and grey patterning on the PCB, and modern graffiti-styled ASUS designs on the rear panel cover and chipset heatsink. 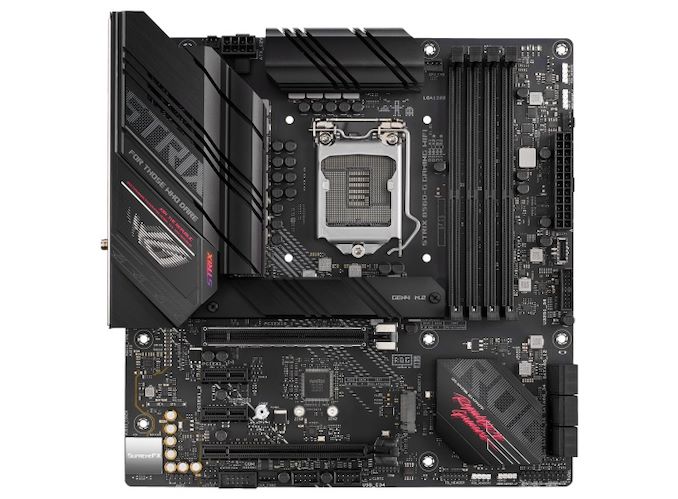 Looking at the board's specifications, ASUS includes two full-length PCIe slots including one PCIe 4.0 x16 and one PCIe 3.0 x4 slot, with two additional PCIe 3.0 x1 slots. For storage, there are two M.2 slots including one PCIe 4.0 x4 and one PCIe 3.0 x4/SATA, with six SATA ports that feature support for RAID 0, 1, 5, and 10 arrays. In the top-right hand corner are four memory slots, with support for up to DDR4-5000 and capacity for up to 128 GB of memory. ASUS is advertising the B560-G Gaming WIFI to include a 10-phase power delivery featuring teamed power stages, with one 8-pin 12 V ATX CPU power input.

ASUS includes a single USB 3.2 G2x2 Type-C port on the rear panel, as well as oneType-C port designed for audio devices, one USB 3.2 G1 Type-A, and six USB 2.0 ports. There are two video outputs including an HDMI 2.0 and DisplayPort 1.4, with one Intel I225-V 2.5 GbE port and an Intel AX200 Wi-Fi 6 CNVi offering BT 5.1 connectivity. Finishing off the rear panel is a small BIOS flashback button, and five 3.5 mm audio jacks, and S/PDIF optical output controlled by a SupremeFX S1220A HD audio codec.