The server landscape is changing very quickly. While the promise of Arm servers for many years has been just that – this year’s introduction of the Graviton2 marked the tipping point where Arm server chips no longer represented a niche use-case, but rather a real – and competitive option. The only problem with Graviton2 was that this was an internal Amazon-only solution – so you couldn’t really say it was an option against AMD or Intel.

That’s where Ampere Computing steps in, positioning themselves as an open merchant silicon vendor, and the first to use and deploy Arm’s new Neoverse CPU line-up in such a way. The Altra QuickSilver being the very first attempt at this, truly hits it out of the park and matches the high expectations of the silicon.

Ampere’s approach is significantly more aggressive, with more performance, and more power, than what the Graviton2 aimed for – the new 80-core Q80-33 flagship SKU essentially has managed to match the performance of AMD’s flagship Rome chip – the 64-core EPYC 7742. While personally that didn’t surprise me much, I could imagine that for many readers out there this to come as an unexpected turn of events.

The Altra Q80-33 sometimes beats the EPYC 7742, and loses out sometimes – depending the workload. The Altra’s strengths lie in compute-bound workloads where having 25% more cores is an advantage. The Neoverse-N1 cores clocked at 3.3GHz can more than match the per-core performance of Zen2 inside the EPYC CPUs.

There are still workloads in which the Altra doesn’t do as well – anything that puts higher cache pressure on the cores will heavily favours the EPYC as while 1MB per core L2 is nice to have, 32MB of L3 shared amongst 80 cores isn’t very much cache to go around. Generally, I think the mesh interconnect remains a weak-point for this generation of Neoverse products and there’s improvements to be done in the next iteration of designs. 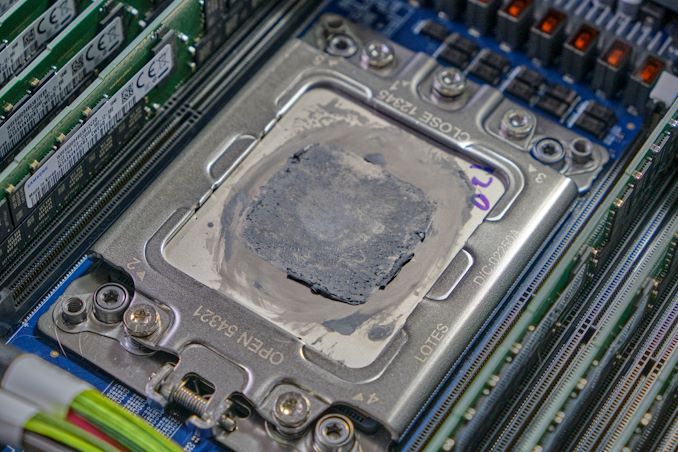 Today we’ve tested the Wiwynn based “Mount Jade” 2S Ampere Altra server – the Altra’s support for dual-socket platforms is functional, but relying on CCIX instead of a native coherency protocol between CPU cores in the two sockets means that performance isn’t nearly as good as the scaling we see from AMD or Intel. The single-socket “Mount Snow” Altra platforms as well as the platform solutions from GIGABYTE might be a better option for some deployments.

In terms of power-efficiency, the Q80-33 really operates at the far end of the frequency/voltage curves at 3.3GHz. While the TDP of 250W really isn’t comparable to the figures of AMD and Intel are publishing, as average power consumption of the Altra in many workloads is well below that figure – ranging from 180 to 220W – let’s say a 200W median across a variety of workloads, with few workloads actually hitting that peak 250W. I would say that yes, the Altra does have a power efficiency advantage over AMD’s EPYC platform, but not something that is overly significant enough to say that it completely changes the landscape.

Where Ampere and the Altra definitely is beating AMD in is TCO, or total cost of ownership. Taking the flagship models as comparison points – the Q80-33 costs only $4050 which generally matching the performance of AMD’s EPYC 7742 which still comes in at $6950, essentially 42% cheaper. Of course, performance/$ will vary depending on workloads, but the Altra’s performance is so good that I don’t think it really changes the narrative of that large a cost difference. We’re really on basing this on both companies’ MSRP prices and we know for a fact many customers will be paying less than that for volume purchases and relying on discounts, but that can also apply to Ampere and the Altra.

One will note I didn’t make any mention of Intel yet - Intel’s current Xeon offering simply isn’t competitive in any way or form at this moment in time. Cascade Lake is twice as slow and half as efficient – so unless Intel is giving away the chips at a fraction of a price, they really make no sense. Ice Lake-SP is around the corner, but I don’t expect it to manage to bridge the performance or efficiency gap. Ampere and AMD here have free reign on the server market share – with Ampere having to cross the hurdle to convince customers to switch over from x86 to Arm.

Ampere is already shipping Altra systems to customers, with Oracle’s cloud business being the first big notable win for the company – signifying already very positive reactions in the market.

What we need to keep in mind though, is that today’s comparisons were against AMD’s EPYC 7742 which was launched almost 15 months ago. Rome’s successor, Milan, is already shipping to customers and has already started hitting the channel, and we expect to hear more about the Zen3-based EPYC chips in the coming weeks. I’m not expecting major leaps, but a 20% performance bump is pretty much a safe bet to make – it would beat the Q80-33 in more workloads and shift the balance a bit – but Ampere’s aggressive pricing would still be something for AMD to worry about.

What really excites me, is the potential of future Altra designs. Ampere has already announced that Altra-Max “Mystique” will be coming in 2021 – essentially a 128-core version of the same Neoverse-N1 platform used in the QuickSilver design today. We’ll have to see how that scales, but it’ll certainly be a compute monster. The real big deal will be the 5nm 2022 “Siryn” design – if Ampere adopts the Neoverse-V1 CPU core from Arm, and I hope they will, then that would signify at minimum  a +50% performance uplift, which is massive.

The Altra overall is an astounding achievement – the company has managed to meet, and maybe even surpass all expectations out of this first-generation design. With one fell swoop Ampere managed to position itself as a top competitor in the server CPU market. The Arm server dream is no longer a dream, it’s here today, and it’s real.