The previous pages were written ahead of Apple officially announcing the new M1 chip. We already saw the A14 performing outstandingly and outperforming the best that Intel has to offer. The new M1 should perform notably above that.

We come back to a few of Apple’s slides during the presentations as to what to expect in terms of performance and efficiency. Particularly the performance/power curves are the most detail that Apple is sharing at this moment in time: 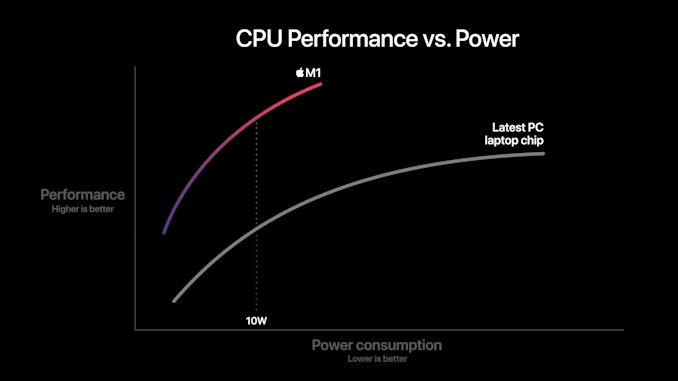 In this graphic, Apple showcases the new M1 chip featuring a CPU power consumption peak of around 18W. The competing PC laptop chip here is peaking at the 35-40W range so certainly these are not single-threaded performance figures, but rather whole-chip multi-threaded performance. We don’t know if this is comparing M1 to an AMD Renoir chip or an Intel ICL or TGL chip, but in both cases the same general verdict applies:

Apple’s usage of a significantly more advanced microarchitecture that offers significant IPC, enabling high performance at low core clocks, allows for significant power efficiency gains versus the incumbent x86 players. The graphic shows that at peak-to-peak, M1 offers around a 40% performance uplift compared to the existing competitive offering, all whilst doing it at 40% of the power consumption.

Apple’s comparison of random performance points is to be criticised, however the 10W measurement point where Apple claims 2.5x the performance does make some sense, as this is the nominal TDP of the chips used in the Intel-based MacBook Air. Again, it’s thanks to the power efficiency characteristics that Apple has been able to achieve in the mobile space that the M1 is promised to showcase such large gains – it certainly matches our A14 data.

Don't forget about the GPU

Today we mostly covered the CPU side of things as that’s where the unprecedented industry shift is happening. However, we shouldn’t forget about the GPU, as the new M1 represents Apple’s first-time introduction of their custom designs into the Mac space. 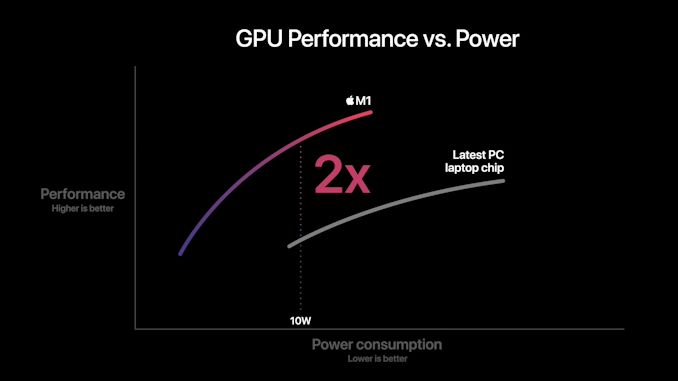 Apple’s performance and power efficiency claims here are really lacking context as we have no idea what their comparison point is. I won’t try to theorise here as there’s just too many variables at play, and we don’t know enough details.

What we do know is that in the mobile space, Apple is absolutely leading the pack in terms of performance and power efficiency. The last time we tested the A12Z the design was more than able to compete and beat integrated graphics designs. But since then we’ve seen more significant jumps from both AMD and Intel.

Apple claims the M1 to be the fastest CPU in the world. Given our data on the A14, beating all of Intel’s designs, and just falling short of AMD’s newest Zen3 chips – a higher clocked Firestorm above 3GHz, the 50% larger L2 cache, and an unleashed TDP, we can certainly believe Apple and the M1 to be able to achieve that claim.

This moment has been brewing for years now, and the new Apple Silicon is both shocking, but also very much expected. In the coming weeks we’ll be trying to get our hands on the new hardware and verify Apple’s claims.

Intel has stagnated itself out of the market, and has lost a major customer today. AMD has shown lots of progress lately, however it’ll be incredibly hard to catch up to Apple’s power efficiency. If Apple’s performance trajectory continues at this pace, the x86 performance crown might never be regained.