System performance of the ROG Phone III should be interesting given its gaming phone nature, as well as for the fact that it’s the first Snapdragon 865+ device we’ve come to test. As always, system performance doesn’t necessarily just depend on the hardware of a device, but also on the software tuning that a vendor does to its DVFS and SoC scheduler settings. 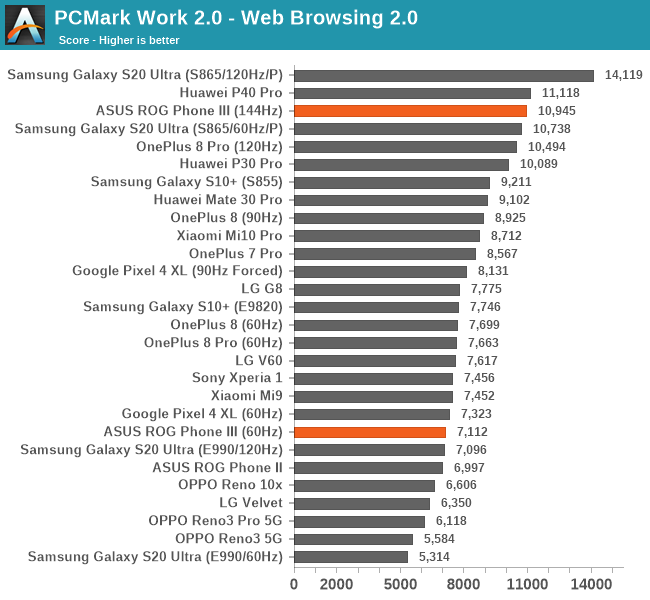 In the PCMark web-browsing test, the workload is quite sensible to scheduler and DVFS settings. Here the ROG Phone III is rather conservatively tuned in its 60Hz setting, only catching up due to the higher 144Hz refresh rate when in that mode. 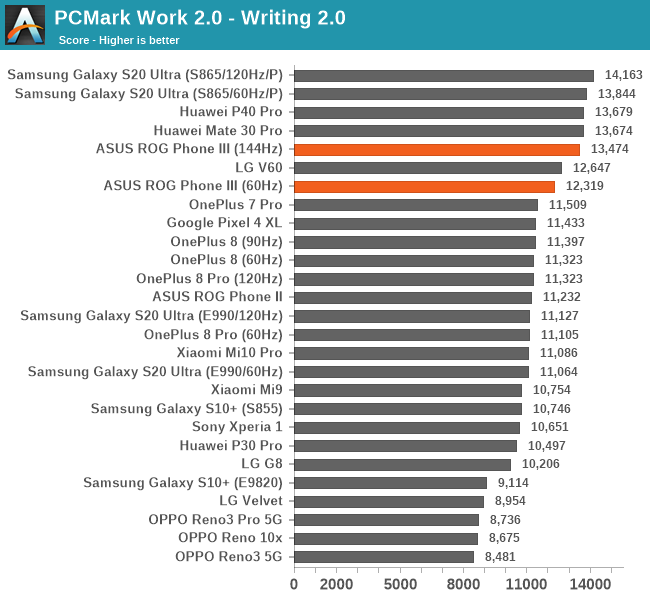 The writing sub-test is the most important of PCMark, and the ROG3 here fares slightly better than most other Snapdragon 865 devices on the market, but falls just short of Kirin 990 phones as well as the Snapdragon Galaxy S20. 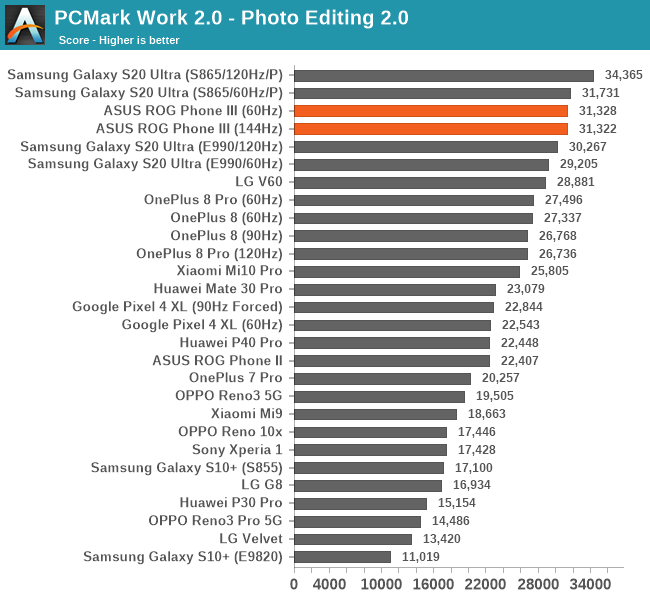 We see a similar positioning for the photo editing test. 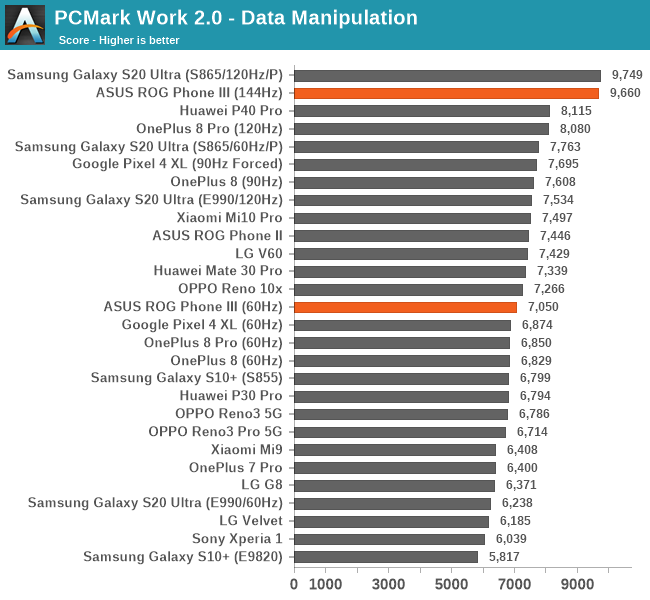 The data-manipulation test seems refresh-rate bottlenecked and here the ROG3 sees a big jump when scaling from 60 to 144Hz. 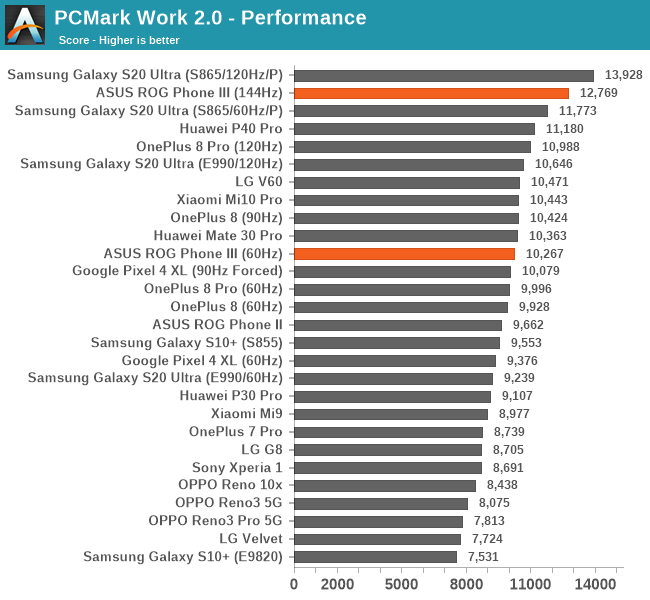 Overall, in the PCMark performance scores, the ROG Phone III only falls short to the Snapdragon Galaxy S20 Ultra in our tests. There are a few details I want to expand in regards to this positioning and why it doesn’t fare better:

The test scores here were performed under the phone’s default operating conditions, with X-Mode being disabled. Unfortunately, it seems that under these conditions, the phone’s performance is very conservative and doesn’t really stand out much from the crowd.

There’s been a delicate balance by various vendor’s performance modes, some which implement quite reasonable settings, whilst other simply are akin to just enabling a benchmark cheat mode. Samsung’s and Huawei’s performance modes are still reasonable as they still use the full dynamic range operating frequencies of the SoC, only increasing the aggressiveness of the scaling behaviour.

Other vendors such as OPPO, and ASUS here, just enable a rather dumb “all-out” mode that in my view isn’t very realistic for a battery powered device, and that I wouldn’t recommend anyone on actually using. I’ll get into more detail about this in the GPU performance section, but I don’t find the default X-Mode levels particularly well implemented when it comes to the balance between performance and power consumption. 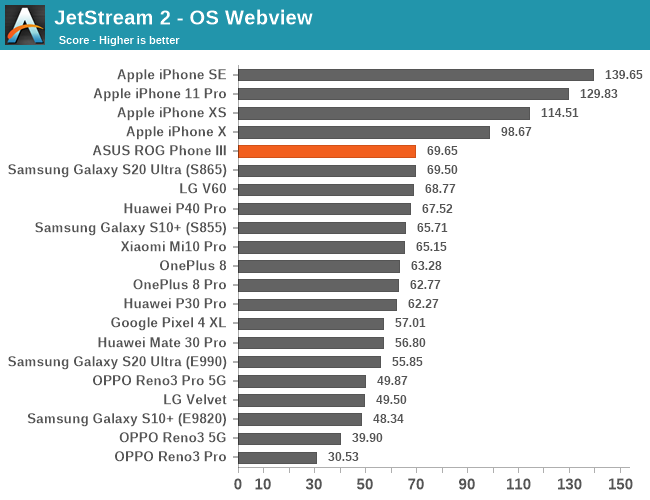 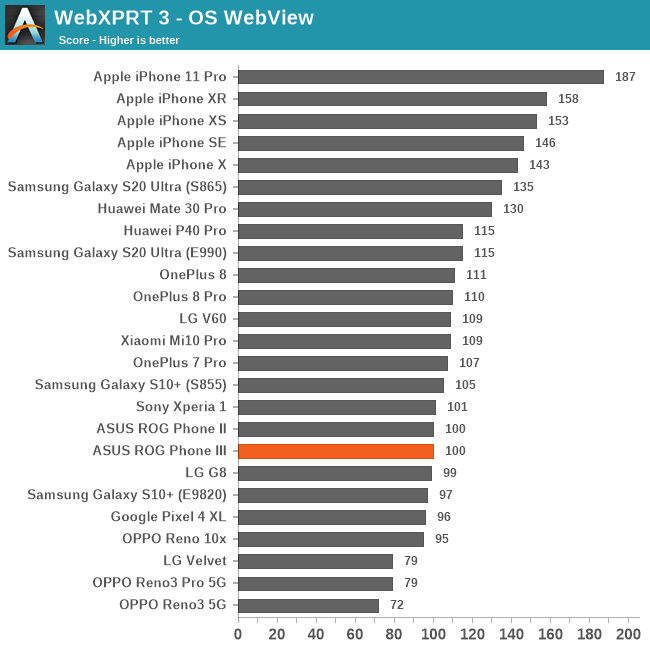 The ROG Phone III did adequately in the browser Javascript benchmarks, although WebXPRT 3 does showcase its rather conservative performance tuning when in its default operating mode. 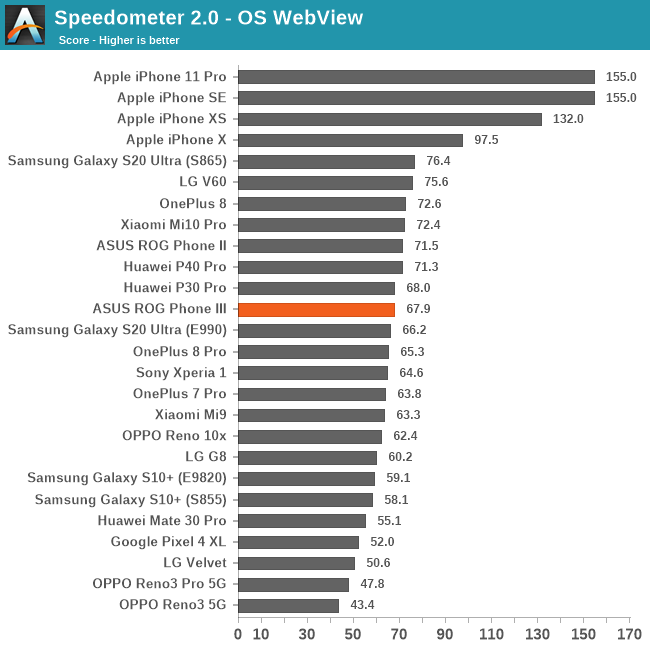 I had some really odd issues with Speedometer 2.0, in that the ROG Phone III kept performing quite horribly in WebView containers as well as Chrome. I’m not sure what happened here, as the same versions of the apps performed quite well on other Snapdragon 865 devices, which points out to possibly some OS-specific issue on the ASUS device. Using Samsung Internet for example made it perform normally – really odd.

Update: The issue has been resolved with the latest firmware update.

Overall, system performance of the ROG Phone III is excellent, but generally I wouldn’t say that it’s in any way class-leading or able to distinguish itself from other 120Hz phones. The 144Hz mode isn’t something that you will notice over other 120Hz phones, and whilst the phone is very snappy, without the questionable every-day use of X-Mode, it lags behind Samsung’s devices. In this regard, the ROG3 doesn’t perform much differently to any other high-refresh rate Snapdragon 865 phones.