GPU performance of the ROG Phone III should be its very strong-point, as that’s the primary selling point of the device. The new Snapdragon 865+ promises 10% better performance than the regular Snapdragon 865, and we’ve seen quite a few excellently performing S865 devices over the last few months.

How will the ROG3 be able to distinguish itself from the crowd with its fancy cooling solutions, given that the crowd already performs that well? 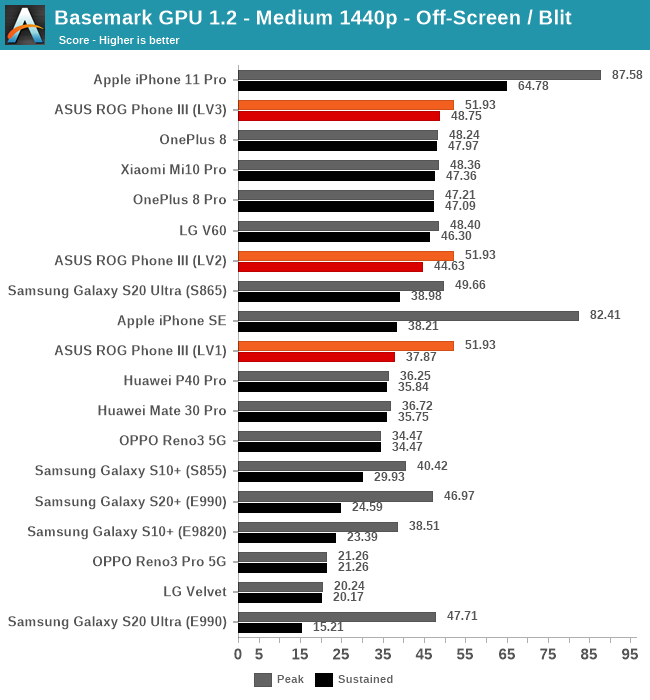 Starting off with Basemark GPU 1.2, we’re off to some odd results.

I noted that the phone didn’t really get hot at all in its default operating mode, with peak skin temperature not exceeding 37°C which is very conservative. I decided to also test the gaming performance in its X-Modes;

At LV2, the phone gets notably hotter and is allowed to reach up to around 45°C peak skin temperatures, with sustained performance getting a nice boost. However, versus the competition, these results are still a tad disappointing as it still lags behind LG, Xiaomi and OnePlus phones, all of which are actually cooler.

Finally, in LV3 mode with the AeroCooler connected, the phone gets a slight sustained performance boost, finally taking the top place amongst Android devices, albeit with only a sliver of a margin. 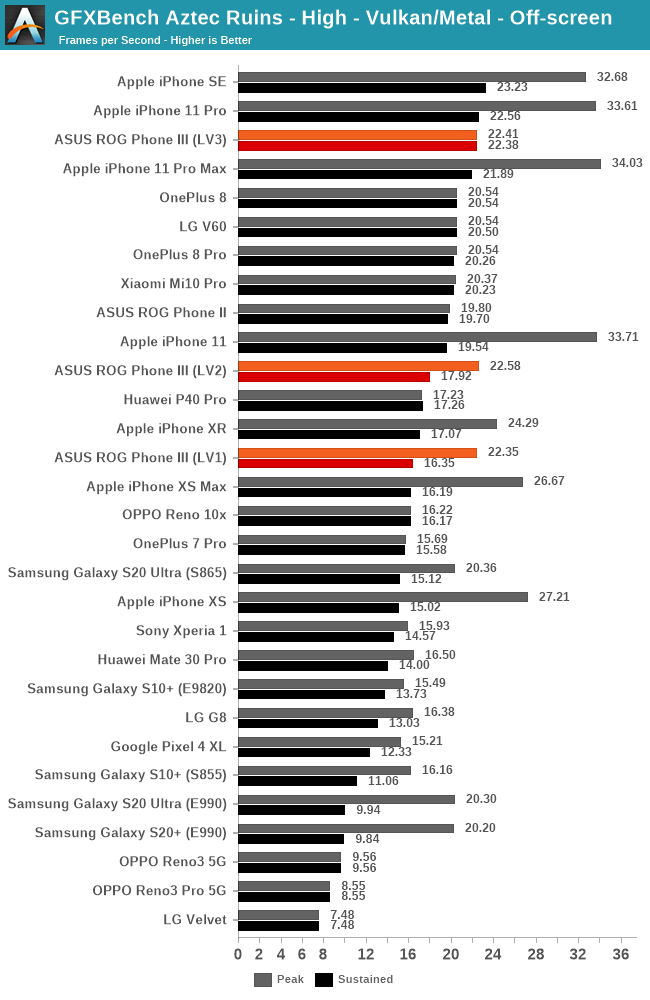 GFXBench Aztec High showcases a similar performance raking, with the default mode ROG3 performing very conservatively, requiring the AeroCooler to be able to keep up with other phones in the market.

GFXBench Aztec High showcases a similar performance raking, with the default mode ROG3 performing very conservatively, requiring the AeroCooler to be able to keep up with other phones in the market.

It was very odd to see the ROG3 perform quite this poorly, and most importantly getting that much hotter than the competition. I re-measured the power consumption of the device and the Snapdragon 865+ only to note that the new SoC is seemingly using quite a lot more power than the standard Snapdragon 865, reaching up to 5.35W versus 3.91W on the Galaxy S20 Ultra. 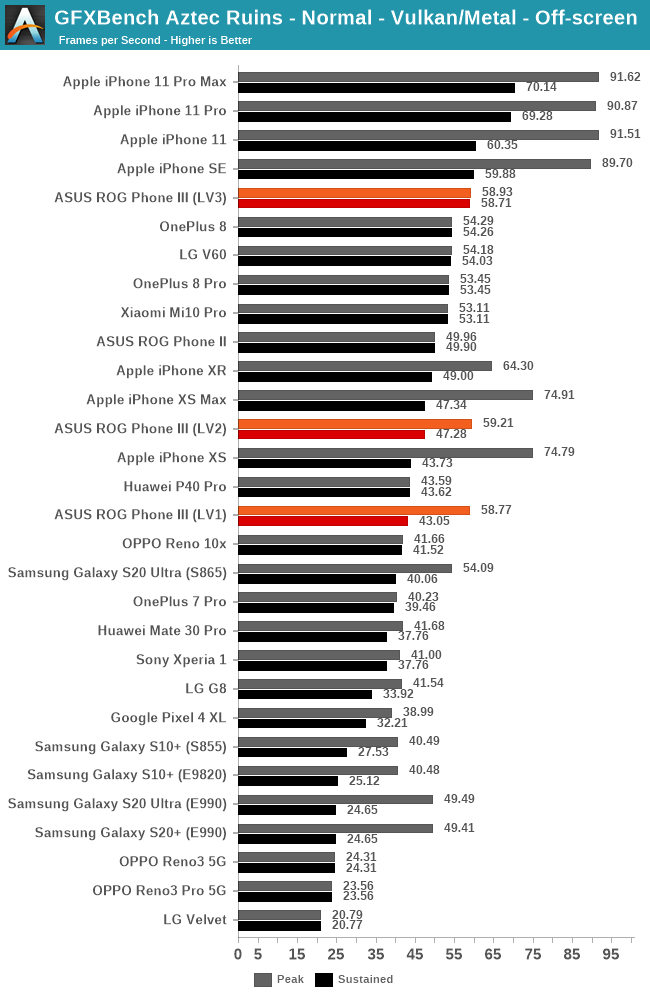 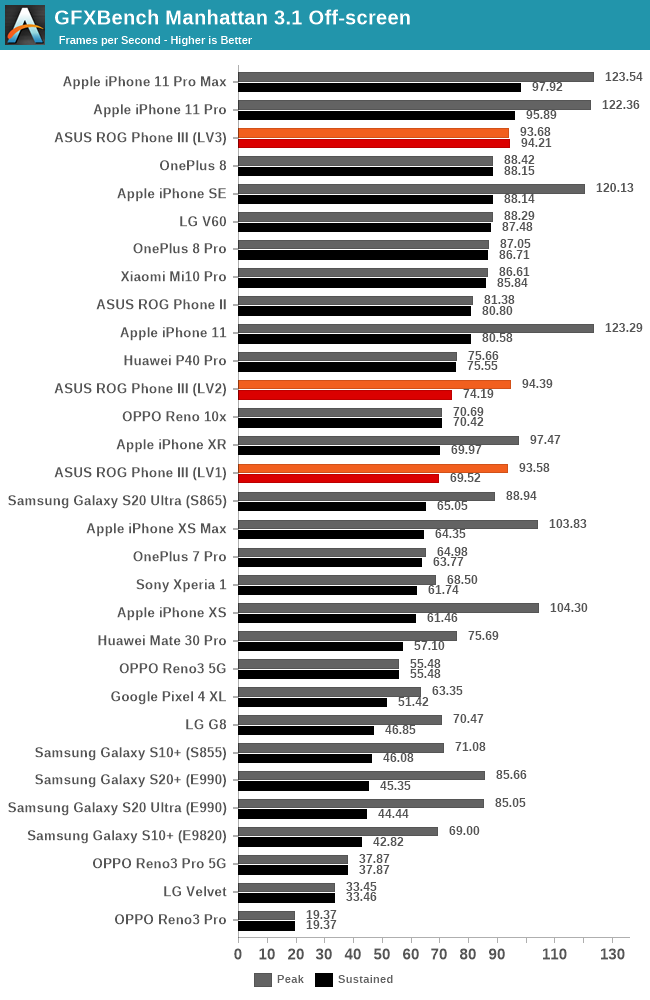 Manhattan 3.1 is the same as well; here the power consumption grows to up to 5.56W which is extremely high and well beyond that a smartphone can normally dissipate. 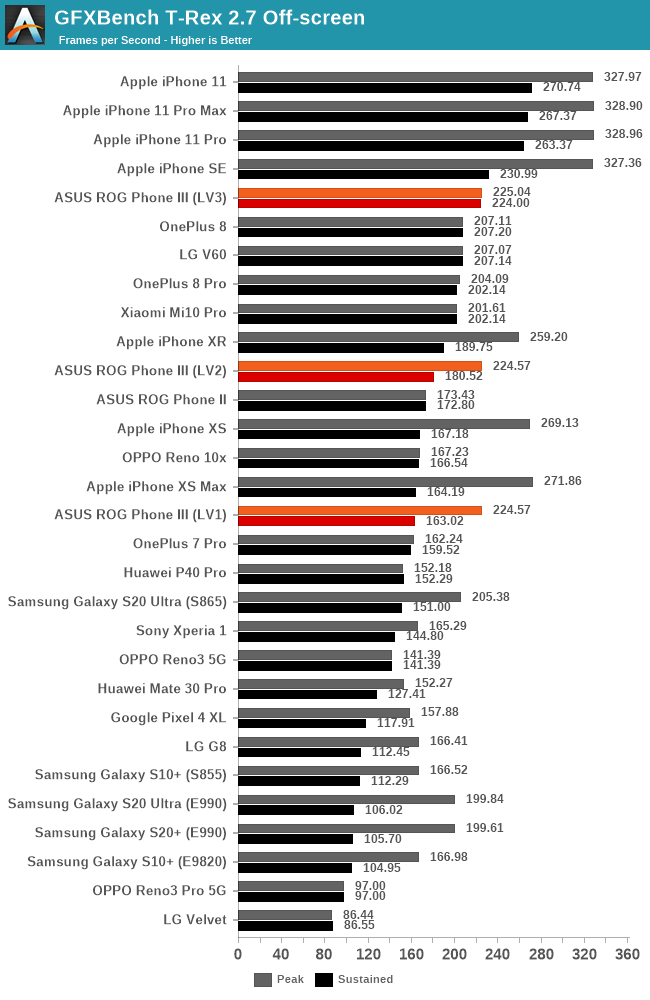 T-Rex also shows a big increase in power consumption, over 1W worse than the Snapdragon 865.

Overall, the ROG Phone III’s disappointing thermals and rather odd and worse sustained performance figures seem to be explained by the new SoC’s vastly increased power consumption characteristics. I made sure that this wasn’t just a measurement fluke, both in regards to power and the sustained performance figures and went ahead and retested a past phone such as the Mi 10 Pro, and I got the very same results. The regular non-gaming Snapdragon 865 phone was just cooler than the ROG Phone III, and was able to maintain higher performance over prolonged periods of time than the ASUS device.

Yes, the AeroCooler does help with the dissipation of heat, but in absolute terms, that’s a quite high price to pay in order to get a tiny advantage over other devices which don’t require any extra cooling.