Perhaps one of MSI’s most important models on any B series chipset is its MAG Tomahawk series. Highly popular with consumers due to offering solid features at a very competitive price point, the MSI MAG B550 Tomahawk has some interesting features with dual M.2 slots, dual Ethernet including a 2.5 G and Gigabit pairing, with a Realtek ALC1200 HD audio codec. 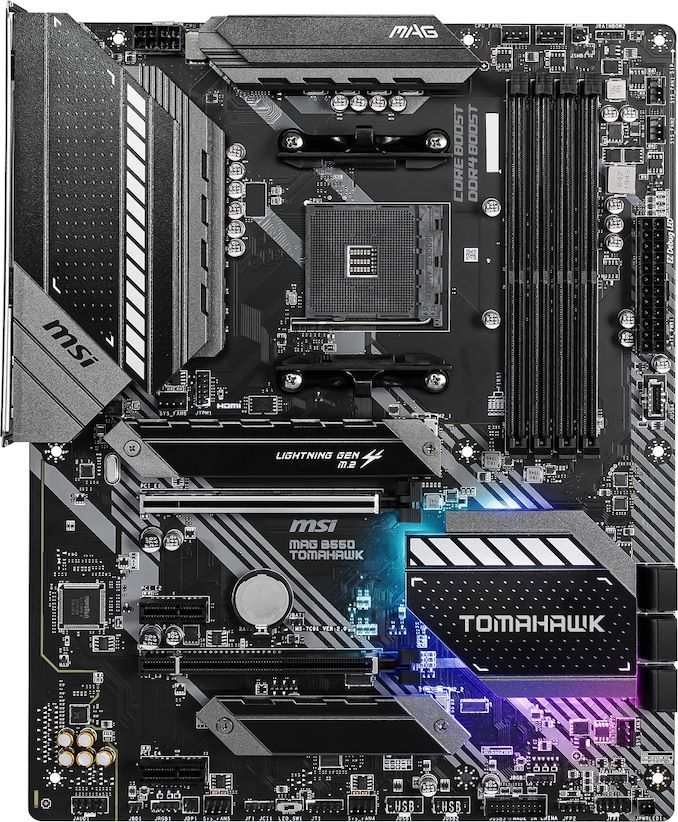 Starting with the design, the B550 Tomahawk has a contrasting black and grey design, including the heatsinks, rear panel cover, and a patterned PCB. There is one element of RGB LED lighting which can be found underneath the chipset heatsink. It features two full-length PCIe slots with the top slot operating at PCIe 4.0 x16, and a second PCIe 3.0 x4 slot which derives from the chipset. For storage, the B550 Tomahawk includes two PCIe M.2 slots, with the top slot benefiting from PCIe 4.0 x4 support, and the second slot locked at a maximum of PCIe 3.0 x4. Both M.2 slots include separate M.2 Frozr heatsinks, while for SATA drives, MSI includes six SATA ports. A total of four memory slots are present with the capability to install up to 128 GB, with speeds of up to DDR4-5100 officially supported.

Like the majority of MSI’s B550 models, the B550 Tomahawk includes a single USB 3.2 G2 Type-C, and a single USB 3.2 G2 Type-C port, with two USB 3.2 G1 Type-A and two USB 2.0 ports also present. For networking, there are two RJ45 Ethernet ports, with one controlled by a Realtek RTL8125B 2.5 GbE controller, while the other port is controlled by a Realtek’s Gigabit RTL8111H. A Realtek ALC1200 HD audio codec powers the five 3.5 mm audio jacks and S/PDIF optical output, while the rear panel also includes video outputs for Ryzen APU’s which consists of an HDMI and DisplayPort pairing. Finishing off the rear panel is a small BIOS Flashback button and a PS/2 Keyboard and Mouse combo port.

The MSI MAG B550 Tomahawk is an interesting model as MSI seems to have shifted its marketing position going from a solid entry-level model to a more premium offering. For MSI’s MSRP of $180, MSI includes dual Ethernet which its only B550 model at present to feature this, as well as slotting in Realtek 2.5 G Ethernet controller for good measure. It has all the hallmarks of its X570 counterpart, aside from full native PCIe 4.0 support, no Wi-Fi, and fewer USB 3.2 G2 connectivity, but at just $20 cheaper. It’s hard to make a case to not opt for the fully-fledged MSI X570 Tomahawk over this model.