The MSI B550M Mortar Wifi and B550M Mortar are MSI’s only micro-ATX models currently available at launch and represents the Arsenal series which is MSI’s entry-level gaming range. Both models are identical in terms of features and aesthetics, aside from the Wifi version which comes with a Wi-Fi 6 interface. Some of the pairings other features include two M.2 slots, a Realtek ALC1200 HD audio codec, and a Realtek 2.5 GbE Ethernet controller. 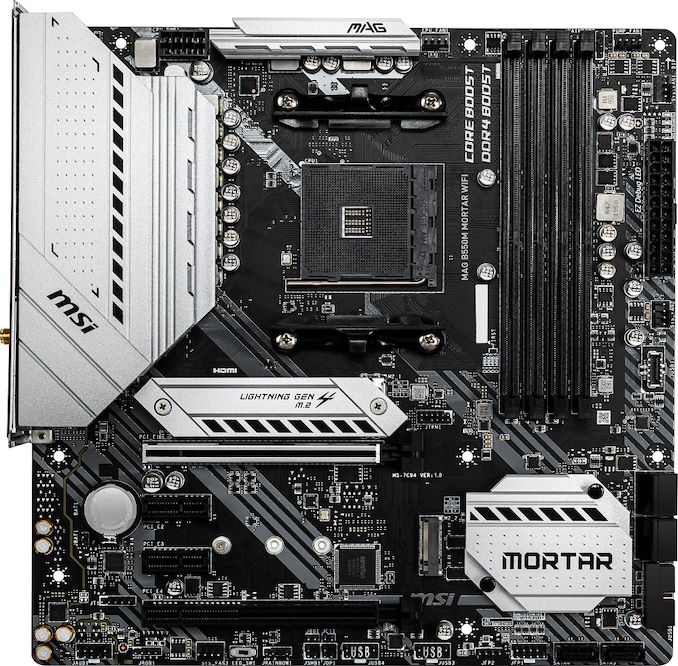 Focusing on the design, the MSI MAG B550M Mortar has a very elegant contrasting design, with striking silver heatsinks on a black and grey patterned PCB. The Mortar includes two full-length PCIe slots with a top slot which operates at PCIe 4.0 x16, a second slot is locked to PCIe 3.0 x4, as well as two PCIe 3.0 x1 slots. The storage capabilities include six SATA ports with support for RAID 0, 1, and 10 arrays, with a pair of M.2 slots. The top M.2 slot operates at PCIe 4.0 x4, while the bottom slot operates at just PCIe 3.0 x4. Users can install up to 128 GB of DDR4 across four memory slots, with speeds of up to DDR4-4400 officially supported.

On the rear panel is a pair of USB 3.2 G2 ports including a Type-A and Type-C, with two USB 3.2 G1 Type-A and two USB 2.0 ports. A Realtek RTL8125B 2.5 G Ethernet port takes care of the audio, while the B550M Mortar Wifi model includes an Intel AX200 Wi-Fi 6 interface with support for BT 5.0 devices. The boards five 3.5 mm audio jacks and S/PDIF optical output are controlled by a Realtek ALC1200 HD audio codec, and the pairing also includes an HDMI video output, a BIOS Flashback button, and a PS/2 keyboard and mouse combo port.

The MSI MAG B550M Mortar Wifi has an MSRP of $170, while the non-Wi-Fi version costs $10 cheaper at $160. On paper, the Mortar is similar to the B550 Tomahawk without the additional Realtek Gigabit Ethernet port, and visually it looks like a stylish offering. The B550 Tomahawk does officially feature better memory support, and although MSI aims at a higher with its MAG series in comparison to its B450 models, the Mortar Wifi for $170 looks like a solid alternative.