MSI MPG B550 Gaming Plus

The MPG series represents its gaming-centric range, and the MSI MPG B550 Gaming Plus sits at the bottom of its performance gaming-inspired series. The design follows a simple sleek all-black aesthetic, with integrated RGB LED lighting underneath the chipset heat sink. Included in the core feature set is a pair of M.2 slots, a Realtek ALC892 HD audio codec and a Realtek Gigabit Ethernet controller. 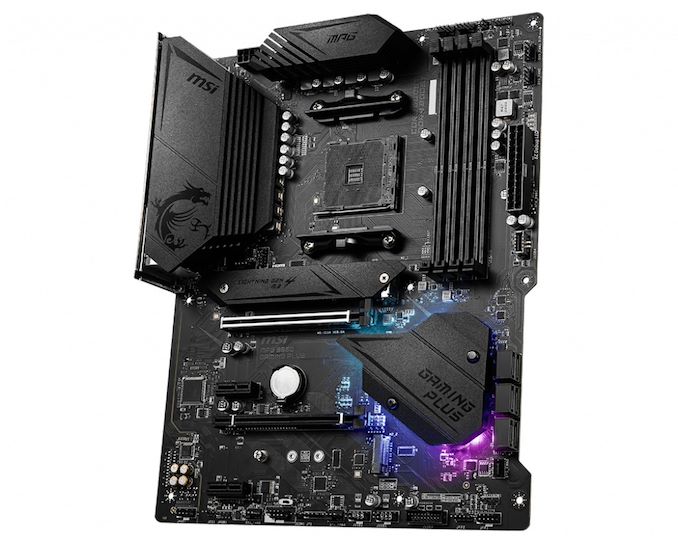 The MSI MPG B550 Gaming Plus includes two full-length PCIe slots with the top slot capable of supporting up to PCIe 4.0 x16, and the second slot is locked at PCIe 3.0 x4. In addition to this is two PCIe 3.0 x1 slots. Making up the board’s storage is six SATA ports with support for RAID 0, 1, and 10 arrays, while MSI also includes two M.2 slots. These consist of a PCIe 4.0 x4 M.2 slot which includes a heatsink, and a second PCIe 3.0 x4 M.2 slot which does not. There are four memory slots which can accommodate up to 128 GB, with speeds of up to DDR4-4400 officially supported.

On the rear panel are a single USB 3.2 G2 Type-A, one USB 3.2 G2 Type-A, two USB 3.2 G1, and four USB 2.0 ports, with a pair of video outputs including an HDMI and DisplayPort. There is five 3.5 mm audio jacks and a single S/PDIF optical output which is powered by a Realtek ALC892 HD audio codec, while a single RJ45 is driven by a Realtek RTL8111H Gigabit Ethernet controller. Finishing off the rear panel is a small BIOS Flashback button and a PS/2 keyboard and mouse combo port.

The MSI MPG B550 Gaming Plus is one of its more affordable B550 models with an MSRP of $150. This price point represents a highly competitive space for MSI to duel it out with other vendors, and the inclusion of a budget Realtek RTL811H and ALC892 controller pairing is what is expected at this price point. It does, however, include some USB 3.2 G2 connectivity which is a huge plus point.