As it currently stands, MSI has unveiled a single mini-ITX model to cater to small form factor users and enthusiasts, the MSI MPG B550I Gaming Edge Wifi. Following a similar design to the ATX sized B550 Gaming Edge Wifi, the smaller mini-ITX version is packed with features including an 8-layer PCB, a full-length PCIe 4.0 x16 slot, two M.2 slots, with a Realtek 2.5 GbE Ethernet controller and Wi-Fi 6 interface pairing. 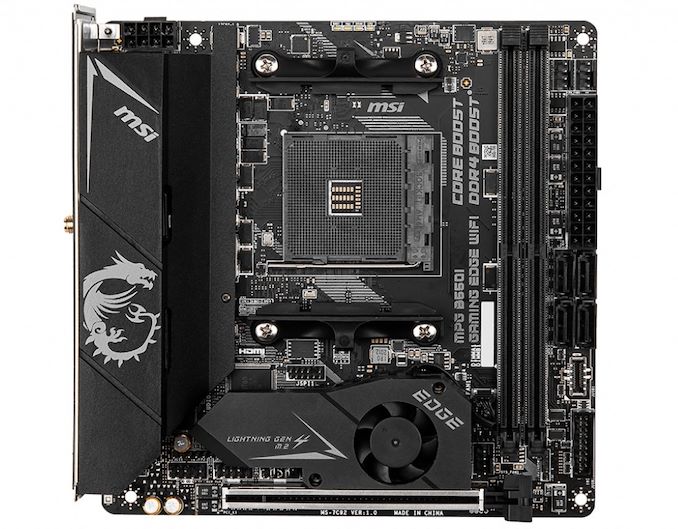 The MSI MPG B550I Gaming Edge Wifi is using an all-black theme throughout with subtle grey accents on the rear panel cover and heatsinks. The bulk of the feature set hangs around B550's PCIe 4.0 support including one full-length PCIe 4.0 x16 slot, one PCIe 4.0 x4 M.2 slot, and a second PCIe 3.0 x4 M.2 slot. Although B550 models have generally ditched the actively cooled chipset heatsinks, the B550I Gaming Edge Wifi includes a cooling fan in what looks to be an amalgamation between the chipset heatsink and the PCIe 4.0 x4 M.2 slot. For conventional SATA drives, MSI includes four straight-angled SATA ports with support for RAID 0, 1, and 10 arrays. While mini-ITX models have been favored for enthusiast memory overclockers due to shorter memory traces to the CPU, the B550I Gaming Edge Wifi supports up to DDR4-4600 officially which is much lower than other MSI MPG B550 models. Users can install up to 64 GB across two available memory slots.

The rear panel includes a varied selection of IO including a single USB 3.2 G2 Type-C, two USB 3.2 G1 Type-A, and two USB 2.0 ports. MSI includes a single HDMI 2.1 video output for users looking to opt for a Ryzen based APU, while a PS/2 keyboard and mouse combination port allows the use of legacy peripherals. For networking, there is a Realtek RTL8125B 2.5 GbE Ethernet controller, with an Intel AX200 Wi-Fi 6 interface which also allows the use of BT 5.0 devices. Rounding off the rear panel is a small BIOS Flashback button, and five 3.5 mm audio jacks and a single S/PDIF optical output which is powered by a Realtek ALC1200 HD audio codec.

The MSI MPG B550I Gaming Edge Wifi is the only mini-ITX model at launch from the company, and it is seen as a direct replacement to the B450I Gaming Plus AC. While it offers a better controller set and includes official support for PCIe 4.0 via the full-length PCIe 4.0 x16 slot and PCIe 4.0 x4 M.2 slot, it comes at the much more premium price of $200. With two USB 3.2 G2 slots including a Type-A and Type-C pairing, and a Realtek RTL8125B 2.5 G Ethernet controller, with Wi-Fi 6 and two M.2 slots, it looks a competitive model in the mid-range mini-ITX market space.