Opting for a simplistic design and functional set of features is the GIGABYTE B550M Aorus Elite which is reminiscent of its larger ATX sized counterpart, the B550 Aorus Elite. Slotting in behind the Pro models in its product stack, GIGABYTE has equipped it with two M.2 slots, four SATA ports, support for DDR4-4733 and a Realtek Gigabit Ethernet controller. 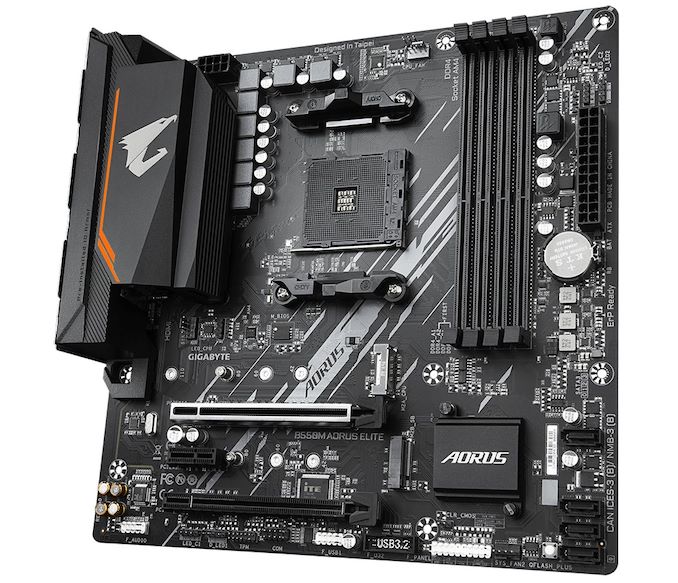 Set upon a black and grey patterned PCB, the GIGABYTE B550M Aorus Elite includes two full-length slots which operate at PCIe 4.0 x16 and PCIe 3.0 x4, with an additional PCIe 3.0 x1 slot. For storage, GIGABYTE has included two M.2 slots with one with support for PCIe 4.0 x4 drives, while the other slot runs at PCIe 3.0 x4. For SATA devices, there are four SATA ports with support for RAID 0, 1, and 10 arrays. Users can install up to 128 GB of DDR4-4733 memory across four memory slots. Compared to GIGABYTE's premium models, the B550M Aorus Elite has a more modest 5+3 phase power delivery, which draws power from a sing

The rear panel includes four USB 3.2 G1 and four USB 2.0 ports, and a PS/2 keyboard and mouse combination port. Featured is a pair of video outputs including a DVI-D and HDMI port, with three 3.5 mm audio jacks powered by a budget Realtek ALC887 audio codec, and a single RJ45 port driven by a Realtek based Gigabit Ethernet controller.

The GIGABYTE B550M Aorus Elite has no USB 3.2 G2 connectivity, nor does it feature any Type-C ports, but it is one of the cheaper B550 models with an MSRP of $109. With a Realtek Gigabit and ALC887 HD audio codec pairing, it represents an entry-level model of current times with budget the main focus, while still benefiting from PCIe 4.0 through the top full-length slot and CPU driven PCIe 4.0 x4 M.2 slot.