Moving away from the Aorus branded models, we go down the product to the GIGABYTE B550 Gaming X which follows a simplistic all-black aesthetic, with some grey patterning on the PCB to add contrast. The main features include a 10+3 phase power delivery, two M.2 slots, a Realtek Gigabit Ethernet controller and a Realtek ALC887 HD audio codec. 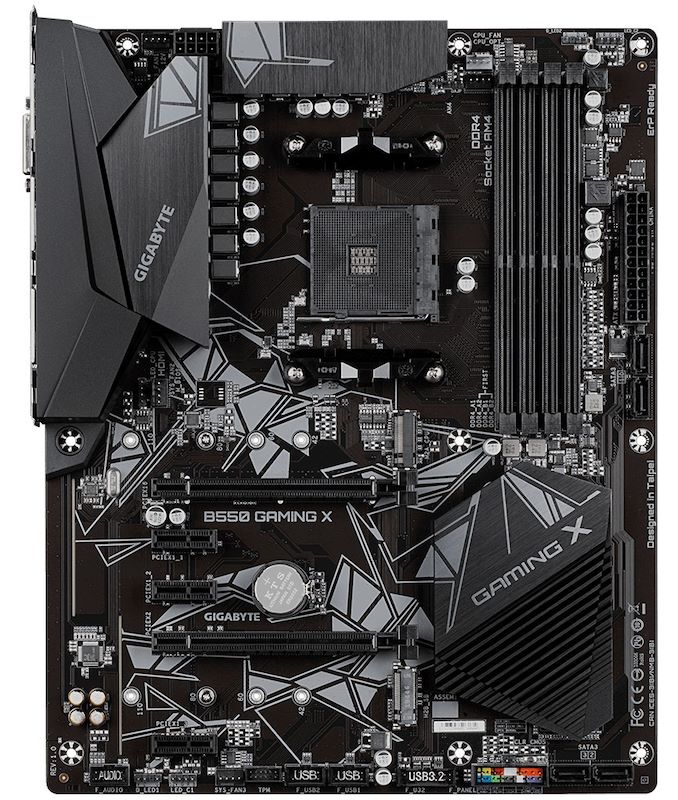 The GIGABYTE B550 Gaming X is an ATX sized model with two full-length PCIe slots with the top slot operating at PCIe 4.0 x16, and the bottom slot at PCIe 3.0 x4. For storage, there is a single PCIe 4.0 x4 M.2 slot, with a PCIe 3.0 x4 slot, and four SATA ports with support for RAID 0, 1, and 10 arrays. Up to 128 GB of system memory can be installed across four available memory slots, with memory with speeds of up DDR4-4733 officially supported. Delivering power to the CPU is a single 8-pin 12 V ATX power input, while GIGABYTE advertises the board to feature a 10+3 phase design.

On the rear panel is a single USB 3.2 G2 Type-A, with there USB 3.2 G1 Type-A and two USB 2.0 ports. There is a PS/2 combo keyboard and mouse port for users with legacy peripherals, while a Realtek ALC887 HD audio codec powers the boards three 3.5 mm audio jacks. A Realtek 8111 Gigabit Ethernet controller controls a single RJ45 port, while a handy Q-Flash Plus button is located on the rear to allow users to update the board's firmware easily.

The GIGABYTE B550 Gaming X is targeted towards entry-level gamers looking to harness the power of AMD's 7nm Ryzen processors while offering all the basics expected from a PCIe 4.0 enabled motherboard. This model has an MSRP of $139, which does seem expensive given the use of budget controllers, nor does it include any M.2 heatsinks which would have made it slightly more favorable.