Moving down the product stack is the GIGABYTE B550 Aorus Elite which represents the entry-level to its Aorus series of gaming-focused boards. Some of the most notable features include a 12+2 power delivery, dual PCIe x4 M.2 slots with one Gen 4 and one Gen 3, as well as a Realtek 2.5 G Ethernet controller which is becoming more the norm now. 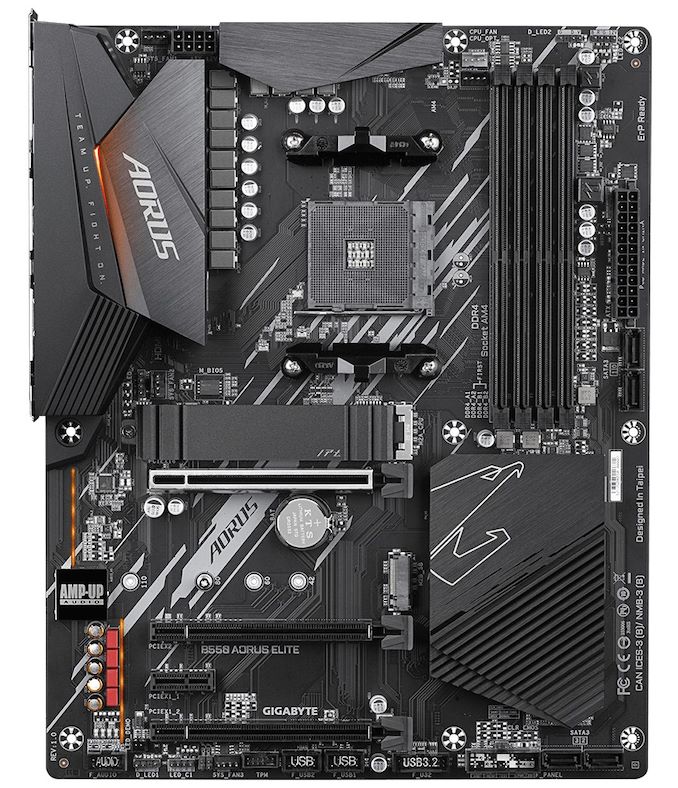 Focusing on the aesthetic, it features a black and grey patterned PCB with black and grey heatsinks, with the chipset heatsink featuring the Aorus falcon logo. Adding a little contrast to the design is a set of orange WIMA audio capacitors, as well as some LEDs within the audio PCB separation line.  For expansion cards such as VGA, there is a single full-length PCIe 4.0 x16 slot, with two other full-length slots which operate at PCIe 3.0 x+2/x+1 which is a little odd. There is also a single PCIe 3.0 x1 slot, while the board does include dual M.2 slots. The top M.2 slot operates at PCIe 4.0 x4 and comes with an M.2 heatshield, while the second M.2 slot operates at PCIe 3.0 x4. There are also four SATA ports with support for RAID 0, 1, and 10 arrays. The Aorus Elite includes four memory slots with support for up to 128 GB of DDR4-4733 memory.

The rear panel includes two USB 3.2 G2 Type-A, four USB 3.2 G1 Type-A, and two USB 2.0 ports. while omitting any form of Type-C connectivity. Controlling the single RJ45 port is a Realtek RTL8125BG 2.5 G Ethernet controller, while a Realtek ALC1200 HD audio codec powers the five 3.5 mm audio jacks and S/PDIF optical output. For users looking to use Ryzen based APUs, the B550 Aorus Master includes two video outputs including a DisplayPort 1.4 and HDMI 2.1. Finishing off the rear panel is a Q-Flash Plus button.

The GIGABYTE B550 Aorus Elite is a more modest offering which keeps some of the style of the more premium Aorus models but cuts back on some features including Wi-Fi and a second M.2 heatsink. This Elite also lacks any Type-C connectivity, but it does offer a Realtek 2.5 G Ethernet controller which is more future proof than Gigabit; there aren't many X570 models with 2.5 G and beyond so it’s refreshing to see a model like this at a lower entry price point that features it.