Moving down the product stack and onto a pair of more affordable, albeit it still impressive models is the B550 Aorus Pro AC and non-Wi-Fi variant. The only difference is the Pro AC version comes an Intel Wi-Fi 5 interface, although both share the same core feature set. The most notable inclusions are two PCIe M.2 slots with one PCIe 4.0 x4 and one PCIe 3.0 x4 slots, with a Realtek 2.5 G Ethernet controller, and three full-length PCIe slots which operate at x16 and x16/x+4/x+2. 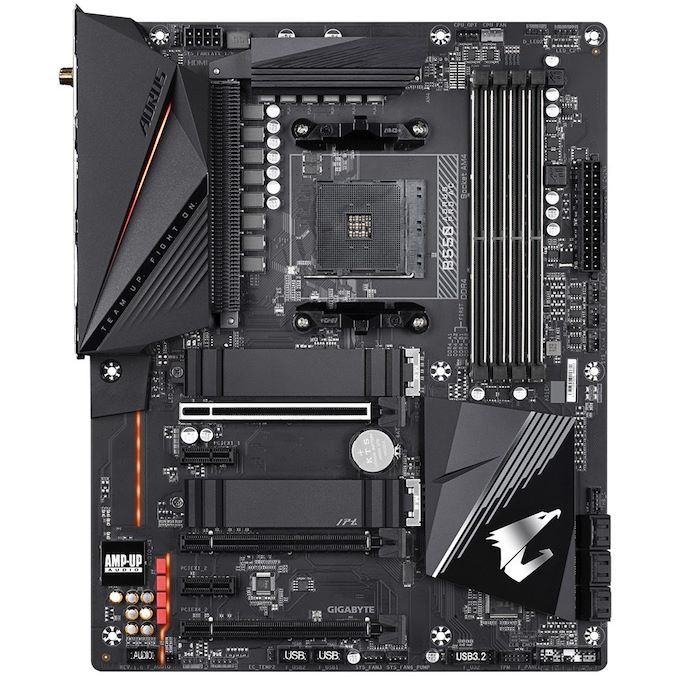 Focusing on the board’s aesthetic, the GIGABYTE B550 Aorus Pro AC and B550 Aorus Pro feature an all-black PCB, with black and grey heatsinks. GIGABYTE is advertising a 12+2 power delivery with a single 8-pin 12 V ATX CPU power input which delivers power directly to the processor. For storage there two M.2 slots with the top slot powered by the processor and supports up to PCIe 4.0 x4 M.2 SSDs, while the second slot is controlled by the chipset and as a consequence, supports up to PCIe 3.0 x4 M.2 drives. There are also six SATA ports which support RAID 0, 1, and 10 arrays. One thing we’ve seen from B550 is vendors are QVL’ing even fast memory as the B550 Aorus Pro supports up to DDR4-5200 with a maximum capacity of up to 128 GB across four memory slots.

On the rear panel of both B550 Aorus Pro models is a single USB 3.2 G2 Type-C, two USB 3.2 G2 Type-A, three USB 3.2 G1 Type-A, and six USB 2.0 ports. Also present is a Q-Flash Plus button and a single Realtek RTL8125BG 2.5 G Ethernet port. On the Pro AC model is two antenna ports for the Intel AC3168 Wi-Fi 5 adapter. Finishing off the rear panel is a single HDMI 2.1 video output for users looking to use Ryzen based APUs, while the 3.5 mm audio jacks and S/PDIF optical output are powered by a Realtek ALC1220-VB HD audio codec.

The GIGABYTE B550 Aorus Pro AC and B550 Aorus Pro represent a more modest price point, with an MSRP of $189 for the Pro AC, and $179 without the Wi-Fi 6 adapter. For the price, both models are still stacked and offer users PCIe 4.0 capability in both the top full-length slot and the top M.2 slot. There is also 2.5 G Ethernet which is something X570 models doesn’t offer at this price point, making B550 an attractive alternative, not to forget the boards large 12+2 advertised power delivery too.