The GIGABYTE B550M Aorus Pro is a micro-ATX motherboard and is the condensed version of the ATX B550 Aorus Pro model. Following a similar design to its larger counterpart, the B550M Aorus Pro is decked out with black heatsinks on a black PCB, with a silver Aorus falcon logo on the chipset heatsink. It is advertised as featuring a 10+3 phase power delivery, two M.2 slots, and a Realtek ALC1200 HD audio codec. 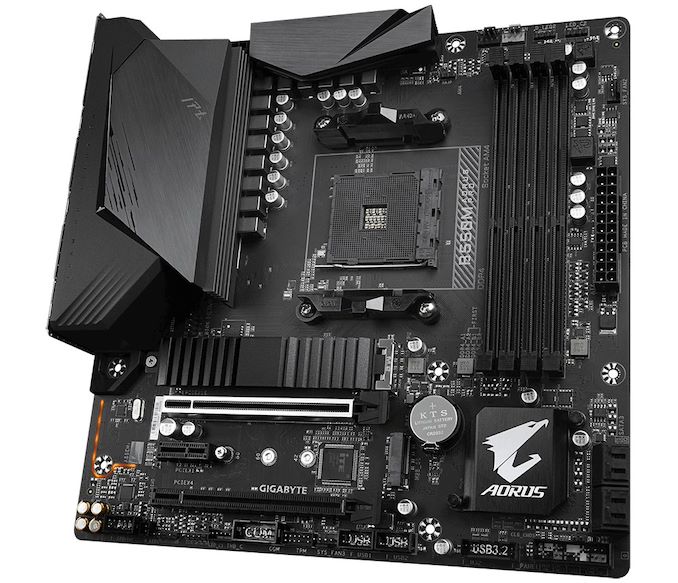 Despite including a similar aesthetic and sharing the same core naming scheme, the GIGABYTE B550M Aorus Pro is micro-ATX and as such, includes fewer expansion slots. It includes two full-length PCIe slots including a PCIe 4.0 x16 slot, and one PCIe 3.0 x4 slot, with a single PCIe 3.0 x1 slot sandwiched in-between. For storage, there are two M.2 slots with the top slot allowing support for PCIe 4.0 x4 drives and comes provided with an M.2 heatsink, while the second slot is controlled by the chipset and can support up to PCIe 3.0 x4 SSDs. Also present are four SATA ports with support for RAID 0, 1, and 10 arrays. The board includes four memory slots with support for up to DDR4-4733, with up to a maximum capacity of 128 GB.

Included on the rear panel is one USB 3.2 G2 Type-C, one USB 3.2 G2 Type-A, four USB 3.2 G1 Type-A, and four USB 2.0 ports. A Realtek ALC1200 HD audio codec powers the five 3.5 mm audio jacks and S/PDIF optical output, while a Realtek RTL8118 GbE Ethernet controller handles the single RJ45 port. GIGABYTE has included a pair of video outputs for users planning to use Ryzen APUs including a DisplayPort 1.4 and HDMI output, while a Q-Flash button finishes off what is a bountiful rear panel for the price.

The GIGABYTE B550M Aorus Pro has an MSRP of $130 which represents good value for money considering the price hike in B550 models over the previous generation B450 models. A Realtek ALC1200 HD audio codec is still favorable and GIGABYTE opts for a Gigabit Ethernet controller which ultimately brings the cost down. The B550M Aorus Pro is one of five micro-ATX models from GIGABYTE’s product stack, which is the most from any vendor for B550 at present.