In addition to its ATX sized B550GTA, the Biostar Racing B550GTQ is a micro-ATX sized model with the same design and near-identical feature set of its larger sibling. Looking more like an entry-level offering, the biggest features include a pair of M.2 slots, six SATA ports, a Realtek Gigabit Ethernet controller and a Realtek ALC1150 HD audio codec. 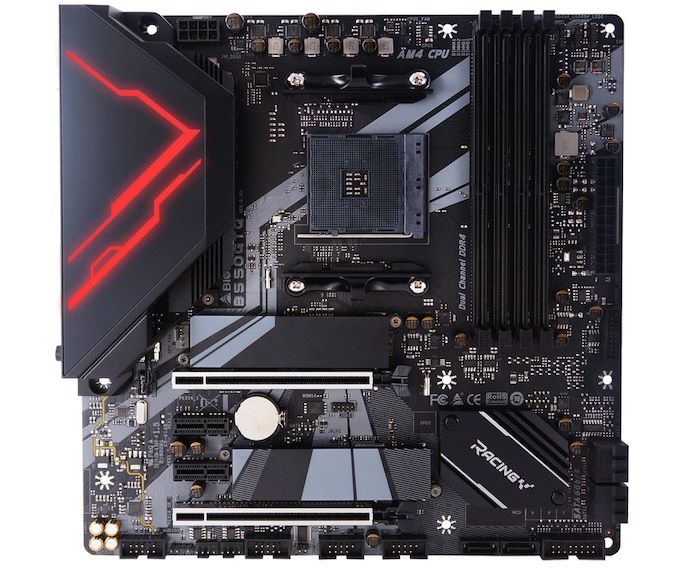 Following a consistent black and grey theme throughout, the Biostar Racing B550GTQ is a micro-ATX model and includes two full-length PCIe slots. This includes the top slot which runs at PCIe 4.0 x16, while the second slot is locked to PCIe 3.0 x4. Complementing the full-length slots is a pair of PCIe 3.0 x1 slots. The board's storage consists of two PCIe slots and although Biostar is advertising both to feature support for PCIe 4.0 x4, it’s likely that only one of these will support Gen4, with the other supporting up to PCIe 3.0 x4 drives. There are also six SATA ports, with four right-angled and two straight-angled ports. The B550GTQ has four available memory slots, with support for up to DDR4-4400, with a maximum capacity of up to 128 GB.

The rear panel includes a single USB 3.2 G2 Type-C, one USB 3.2 G2 Type-A, four USB 3.2 G1 Type-A, and two USB 2.0 ports. Powering the single RJ45 port is a Realtek RTL8118AS Gigabit Ethernet controller, while the boards three 3.5 mm audio jacks are controlled by a Realtek ALC1150 HD audio codec. Biostar has included three video outputs with DVI-D, HDMI and DisplayPort, which gives users plenty of VGA options to consider if pairing up this board with a Ryzen APU. Finishing off the rear panel is a PS/2 keyboard and mouse combo port.

Biostar hasn’t unveiled pricing at present for either of its B550 models, but it’s likely the B550GTQ will cost under $100 based on the feature set in comparison to what other vendors are offering. Biostar is consistently using an older Realtek ALC1150 HD audio which was commonly found on motherboards around five years ago.