Ever since the original Raven Ridge systems, AMD’s Zen-based APUs have set the bar for GPU performance in a 15-Watt package. Coupling AMD’s Vega GPU cores with their Zen CPU cores really changed the game in terms of integrated GPU performance. Their second-generation Picasso platform even bumped the compute unit count up to 11 with the Ryzen Microsoft Surface Edition processor, which was once again based on Vega.

AMD’s philosophy has changed slightly for their third generation Zen-based APU, Renoir. Thanks to the move to TSMC’s 7 nm process, they decided to cut back the GPU cores, but provide more frequency headroom, and coupled with the CPU performance gains of Zen 2, AMD promised faster GPU performance despite the reduction in compute units. So, for the Ryzen 7 models, they are now offering either seven compute units on the Ryzen 7 4700U we have in our review unit, or eight compute units in the Ryzen 7 4800U, with maximum frequencies of 1600 Mhz and 1750 MHz respectively. That means that the unit we are testing today is down four compute units compared to the Ryzen 7 3780U found in the Surface Laptop 3, and although the maximum boost frequency is higher, it is only 200 MHz higher than the best Picasso APU available. We’ve seen AMD ramp up frequency before to get more performance out of their GPUs, and it has served them well, but in a laptop platform, there is far less thermal room to work with, so we shall see how the new philosophy works out for them.

Our testing philosophy for laptops with integrated GPUs has had to evolve very quickly. Laptops based on Intel’s Gen 9.5 graphics had such poor GPU performance that it was not even worth testing them against most 3D games, but both AMD’s Vega GPU on Ryzen, and Intel’s Iris graphics in their Ice Lake SoC have both moved the bar upwards, so more vigorous testing is now required. As with any new testing we bring, please give us some time to fill in the data as we test new devices. 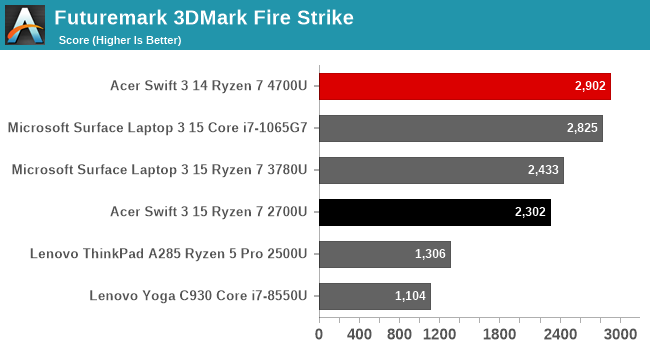 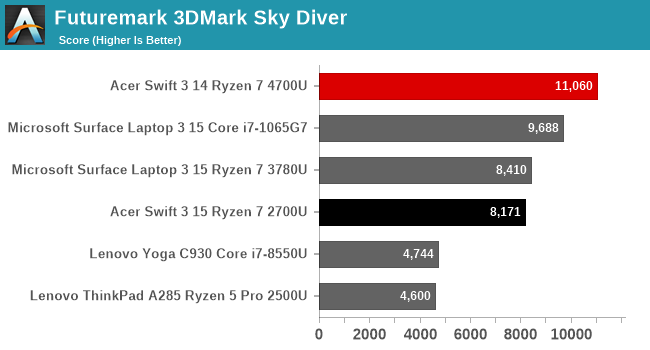 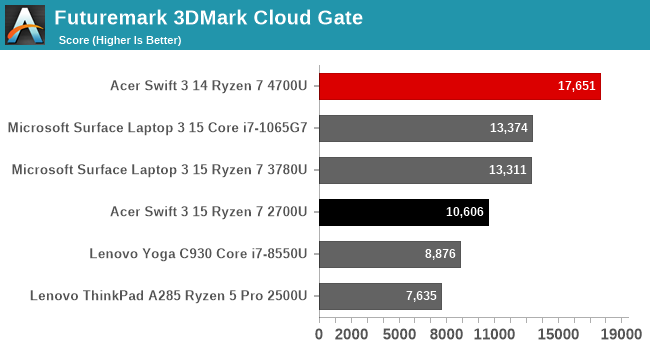 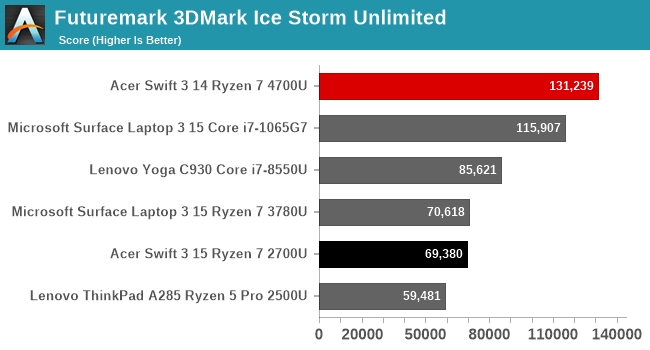 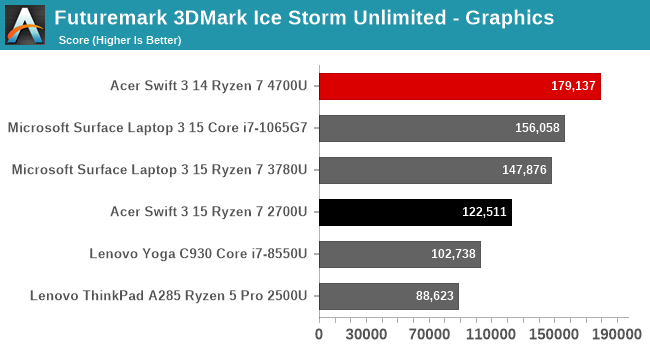 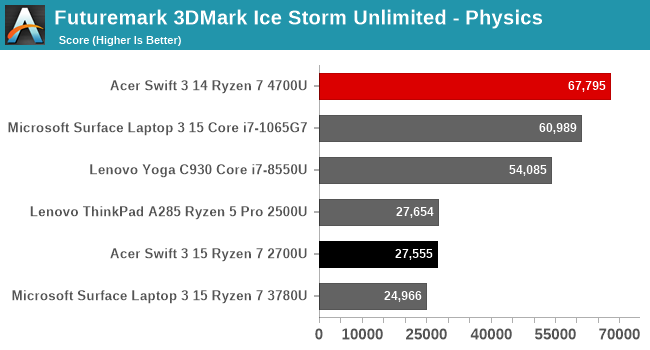 UL’s 3DMark suite offers a range of tests of varying complexity, from the high-end Fire Strike, down to Ice Storm Unlimited, which can be run on smartphones. The Acer Swift 3 is off to a great start with these DX11 based tests, easily outperforming the previous Picasso scores as well as Intel’s Ice Lake platform. The most interesting result is the Ice Storm Unlimited Physics results, where Renoir scores 2.7 times higher than Picasso. The Physics tests are really CPU bound tests, which clearly shows how CPU limited the previous AMD APUs had been. 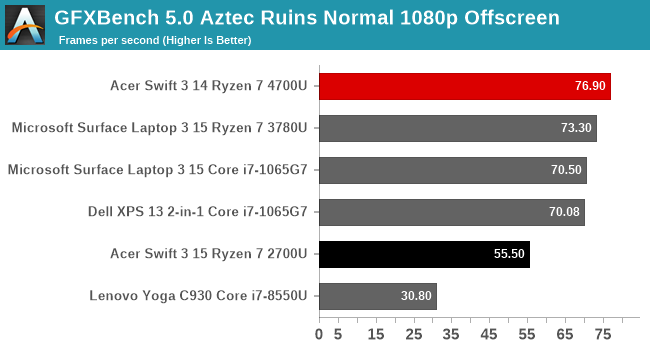 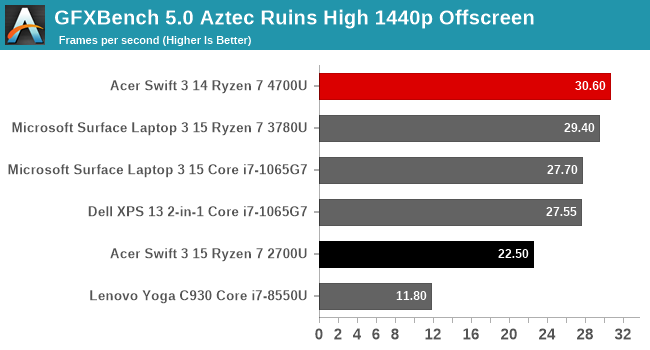 Thanks to the new DX12 tests Kishonti introduced with version 5.0 of their GFXBench suite, this cross-platform benchmark is again relevant on Windows. The results from the Ryzen 7 4700U are interesting. AMD has often done well on DX12, likely thanks to their early efforts with low-level drivers, and their previous Picasso GPU did very well on this benchmark. The Renoir does surpass Picasso, but the margin of victory is small. 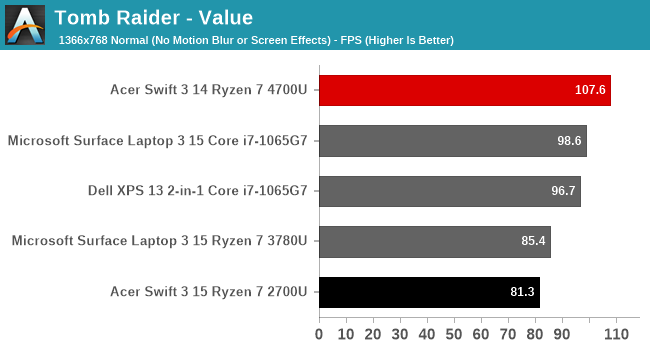 Although a bit long in the tooth, the original Tomb Raider reboot can still be taxing on notebooks, although the game is certainly playable on the modern integrated GPU if you turn down the settings. On our value settings the Acer Swift 3 was able to achieve over 100 frames per second, meaning there is quite a bit of room to increase the quality as long as you keep the resolution down. On both Ice Lake and Renoir, the game is unplayable with our Enthusiast settings at 1920x1080, despite its age. 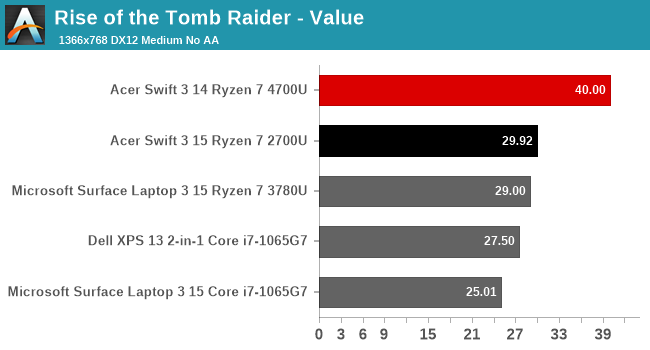 The first sequel to Tomb Raider added DX12 support, and as usual that means our AMD APUs did well. Although the game would be barely playable on Picasso or Ice Lake, the Acer Swift 3 with Ryzen 7 4700U looks like it just squeezes past the 30 FPS minimum you’d really want. This game is still at the limits of integrated GPUs.

The co-operative third person shooter Strange Brigade is a DX12 title that does well even on integrated GPUs. It also appears to be more CPU bound than some of the other DX12 titles in our list, so the extra performance offered by the Zen 2 cores in the Acer Swift 3 help propel it to the top, with far more performance than the previous generation AMD APU.

Codemaster’s F1 series is yet another game that can do well even on integrated graphics if you want to turn the settings down. The Acer Swift 3 does very well here, almost achieving an average of 60 frames per second.

Ubisoft’s Far Cry franchise is well known, but it’s also been impossible to play on most integrated GPUs. That is still the case with the Acer Swift 3, although it just manages over 30 frames per second in this test, outclassing all other integrated notebooks tested. We will get into this a bit later, but this game also showed some very severe thermal throttling, with major dropouts in framerate during the benchmarking.

Although AMD cut back on the size of the GPU in Renoir, they don’t seem to have hurt maximum performance, and the new Zen 2 cores really show that the previous Raven Ridge and Picasso APUs were very CPU bound on some titles. With 36% fewer compute units than the Ryzen 7 3780U found in the Surface Laptop 3, the Acer Swift 3 still manages to outperform it in all cases.

However, the Acer did run into thermal issues when running at maximum performance. Some of this will come down to the cooling system in this particular notebook, but the power management of the Renoir APU also did not seem to be able to cope very well. Rather than find a sweet spot where it can perform well without throttling, the frame rate in Far Cry 5 was like a roller coaster the longer you left the game running. AMD’s choice to cut back on the number of compute units and then increase frequency certainly won’t help here either, and it makes you wonder how well the GPU would have been able to perform on the new 7 nm process with more CUs but a lower maximum boost frequency. We will dig more into the thermals later in the review.