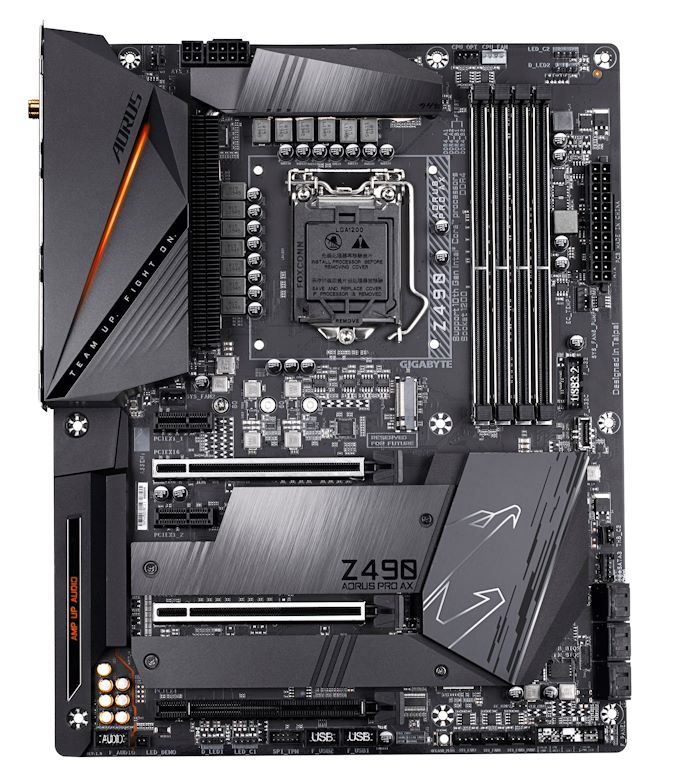 Following a similar design to GIGABYTE's other Z490 Aorus models, the Z490 Aorus Pro AX has a black metallic PCIe slot area cover, with a small strip of RGB LED lighting integrated into the rear panel cover. Focusing on PCIe support, there are three full-length PCIe 3.0 slots which run at x16, x8/x8, and x8/x8/+4, with two PCIe 3.0 x1 slots flanking both sides of the top full-length slot. It includes two PCIe 3.0 x4 M.2 slots, each with heatsinks and the Aorus Pro AX makes use of six SATA ports with RAID 0, 1, 5, and 10 support. Up to 128 GB of DDR4-4800 memory can be installed across four memory slots, with dual-channel support. For enthusiasts, the Z490 Aorus Pro AX has a 12-phase power delivery, with 50 A power stages, and uses a direct heat pipe cooling which connects both heatsinks together.

The GIGABYTE Z490 Aorus Pro AX has a full 12-phase power delivery with solid-looking heatsinks will please enthusiasts, and GIGABYTE has included an Intel 2.5 G Ethernet and Wi-Fi 6 wireless interface pairing, with two PCIe 3.0 x4 M.2 ports. This makes the GIGABYTE Z490 Aorus Pro AX more of a middle of the road option without scrimping on quality, which is reflected in its MSRP of $269.