Working directly with extreme overclocker Vince ‘K|NGP|N’ Lucido, EVGA has some of the most sought after graphics cards and motherboards in the industry by enthusiasts and gamers alike. Usually turning up later than other vendors to the launch party, EVGA plans to launch two new models designed for Z490.  Typically aimed at enthusiasts and gamers with its models and assisted by its EVGA ELEET x1 overclocking utility, EVGA has found success in the components market with its Intel and NVIDIA based products.

Starting with EVGA’s premium Z490 model, the Z490 Dark, it has a lot of bells and whistles with some interesting design choices. The most notable of those is it has just two memory slots on its E-ATX sized 10-layer PCB. It follows a simplistic black and gunmetal grey theme, with a large rear panel cover which doubles up as part of the power delivery heatsink, which forms an L-shape around the LGA1200 socket. Included are two PCIe 3.0 x4 M.2 slots, a single U.2 port, with support for up to DDR4-4600 and up to 64 GB of capacity. 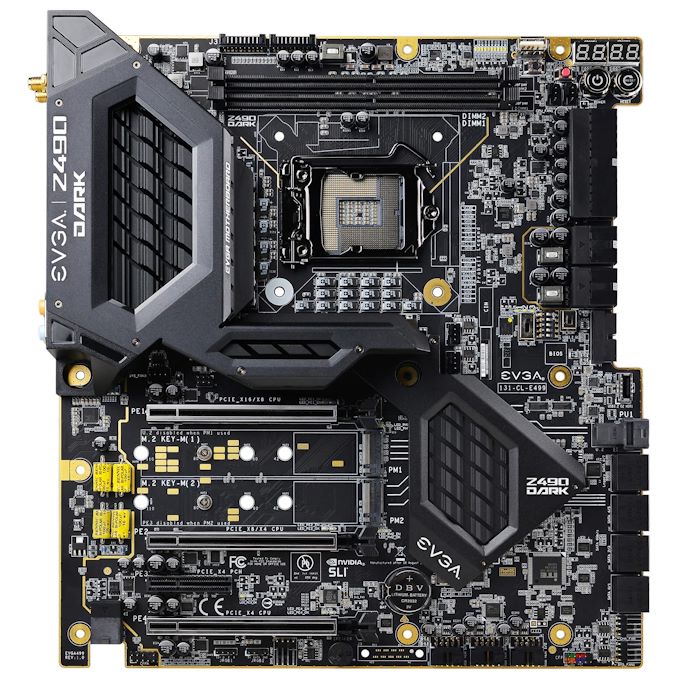 One of the most prominent aspects of the EVGA Z490 Dark is its unconventional desktop design. Typically the memory slots would sit along the right-hand side, but EVGA has placed them along with a transposed LGA1200 socket. This is designed and optimized for extreme overclockers. At the right-hand side are a pair of 8-pin 12 V ATX CPU and a 24-pin 12 V ATX motherboard power inputs with right-angled designs for easier installation. EVGA is advertising an 18-phase power delivery on the Z490 Dark, which looks to be impressive.

On the rear panel are two USB 3.2 G1 Type-C, five USB 3.2 G2 Type-A, and two USB 2.0 ports. Offering support for integrated graphics is a single mini DisplayPort video output. In contrast, the boards five 3.5 mm audio jack and S/PDIF optical output is controlled by a Realtek ALC1220 HD audio codec, with an EVGA NU Audio SV3H615 headphone amplifier. Also featured on the rear panel is an Intel I225-V 2.5 G Ethernet controller which powers one port, while the other is provided from an Intel I219-V Gigabit controller. Also offering wireless support is an unspecified wireless interface, while the rear panel has a small red clear CMOS switch. Last but not least, there are a PS/2 keyboard and mouse combo port.

The EVGA Z490 Dark represents a small overclocking based market but has enough features onboard to cater to enthusiastic audiences too. With an Intel 2.5 G and Gigabit Ethernet combo, two PCIe 3.0 x4 M.2 slots and with single, yet rare U.2 port, it has plenty to divulge on. The two memory slots are designed to improve memory latencies when overclocking, something breaking overclocking records depend on these days. Living up to its Dark moniker, the EVGA Z490 Dark will be available at launch, but at present, there is no information on pricing.