Moving on, it’s time to talk about the GPUs of the systems. The Snapdragon 865’s Adreno 650 is a microarchitectural successor to last year's Adreno 640, increasing the ALUs and ROPs by 50%. Frequency remains the same at 587MHz, and the company promises a 25% performance boost.

The Exynos 990 is more drastic in its GPU changes. Here we see for the first time a chip using Arm’s new Valhall GPU architecture, in the form of the Mali-G77. We’ve discussed the GPU in detail in the deep dive article last year, so be sure to read about the details of the new design there. Samsung LSI employed an 11-core configuration in the new chip, 1 less core than last year’s G76MP12. This is compensated by clocking the design higher at up to 800MHz, up from 702MHz. The higher clock speed does however cost some additional voltage to reach, with the Exynos 990 now peaking at 712mV compared to the 662mV of the previous iteration, although both designs should be clearly operating at lower than nominal voltages of the process nodes.

Beyond the new GPU hardware, it’s also important to note the new chips are the first of their kind to support LPDDR5, which should bring some good efficiency upgrades to bandwidth hungry tasks such as 3D rendering on a GPU. 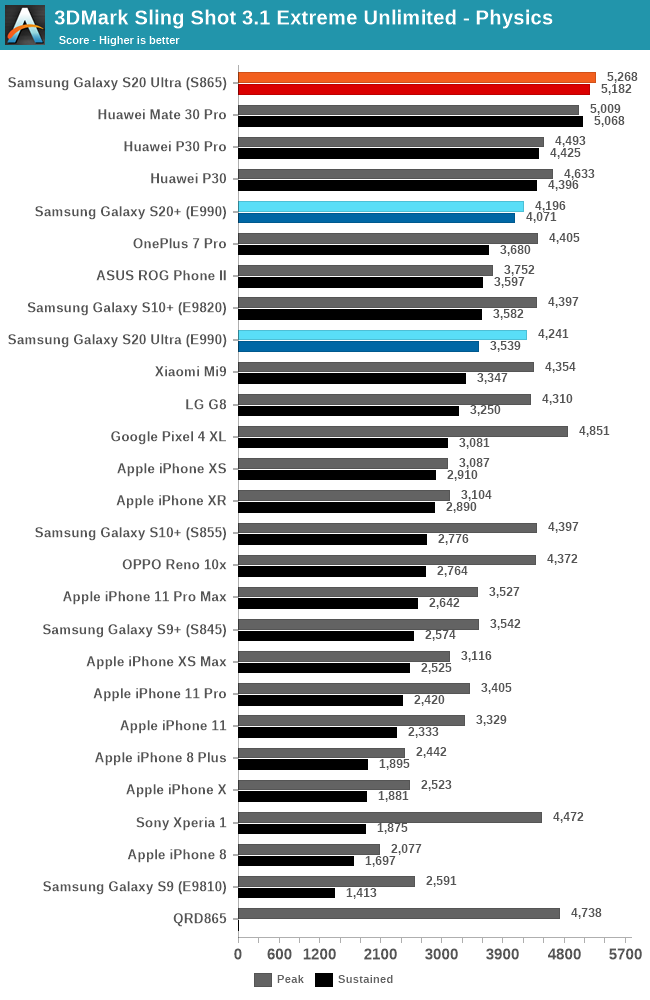 Starting off with 3DMark Physics, which is actually a CPU test in a GPU thermally constrained scenario, we see both phones doing well. The Exynos 990 here likely schedules things more onto the A76 cores, and that’s why performance is less than that of the Snapdragon 865 which here takes the leadership position in the benchmark. Throttling isn’t very prevalent on either device, but for some reason the Exynos Ultra device throttled more than the S20+. 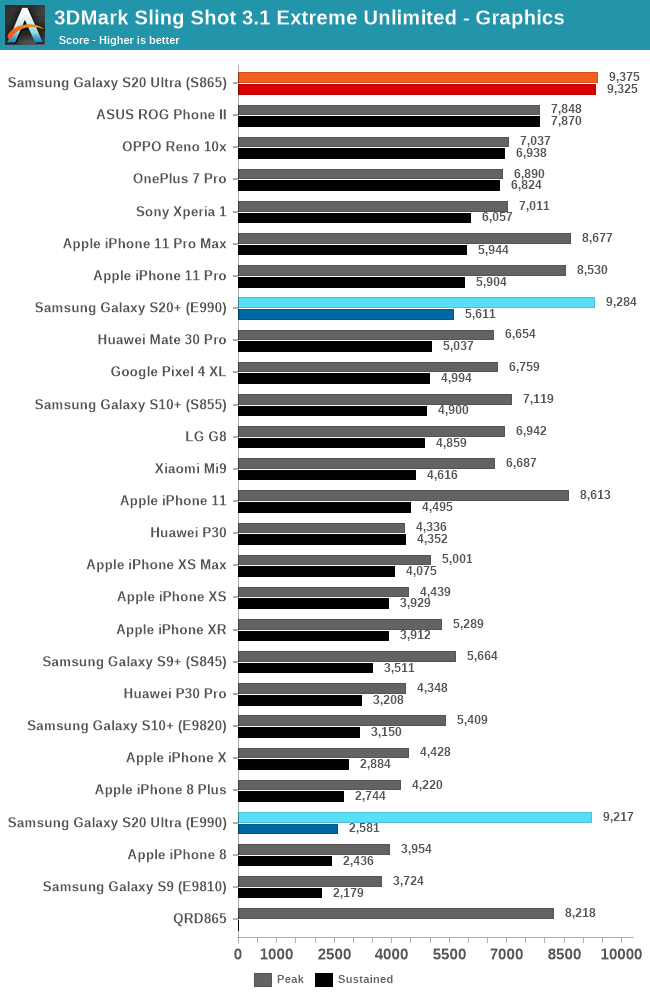 Moving onto the graphics subtest, we’re seeing an extremely stark contrast in scores. The Exynos 990 is able to keep up with the Snapdragon 865’s peak performance figures, however once throttling kicks in, the scores quickly fall down to more moderate figures. The Exynos S20 Ultra’s performance here is again quite puzzling as to why it’s so much worse than the S20+ – both phones didn’t seem to behave very differently in their thermal behavior, so that’s super weird. The performance deficit here is gigantic, with the phone only sustaining 28% of its peak performance.

Meanwhile the Snapdragon S20 Ultra doesn't throttle here at all, and that is absolutely not normal – this is not a chip that is somehow super-efficient or has amazing cooling. Over the years I’ve encountered a lot of such odd results with Snapdragon phones in this benchmark, but this time around I’ve had enough of the weird behavior and I do think there’s some low-level cheating going on. The phone will actually start heating up a lot more than under other workloads, up to the point that the test will actually crash. I don’t understand how that’s possible that this happens only in one benchmark but not others, and the most logical (and likely) explanation is that there’s some benchmark detection going on. Again, I’ve only ever encountered this issue on Snapdragon phones in this test (and we’re also using a custom APK), so it’s super suspicious, but we’re just short of finding the smoking gun that this is some malicious behavior. In any case, please disregard the results as they’re not representative of real behavior.

A few weeks ago, Basemark had finally released their new Basemark GPU version 1.2, which now included some bug fixes in the workloads as well as an iOS variant of the test, finally enabling cross-platform testing for mobile devices. After some internal validations, I’ve deemed it worthy to be added to our GPU suite. I’m using a custom mode at 1440p at medium settings to have it be a little more stressing in terms of the workload. 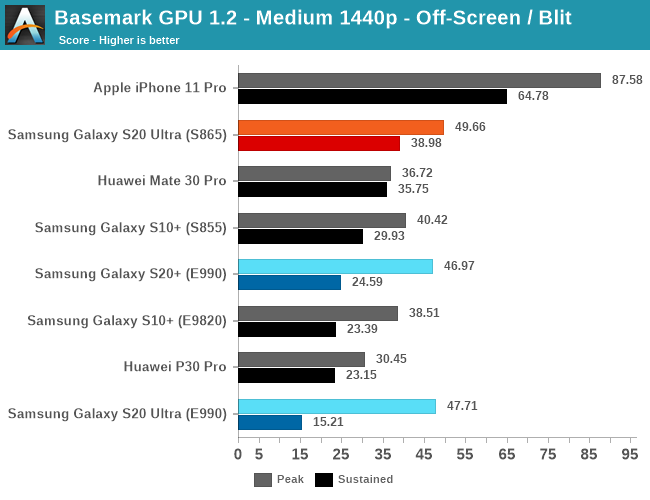 In this new test, we see relatively familiar scaling results, with things being quite on par between the Snapdragon and Exynos SoCs when it comes to their peak performance figures. It’s to be noted just how far ahead Apple’s GPUs are in this test, essentially posting figures almost 2 generations ahead.

Throttling on the Snapdragon 865 S20 Ultra is ok, only losing 22% at thermal equilibrium. The Exynos 990 S20+  was more disappointing, with performance barely better than that of the S10+ last year. The Exynos S20 Ultra again behaved very differently and for some odd reason throttled even more, actually ending up noticeable slower than last year’s model. At only 31% of peak performance, that’s some atrocious performance degradation, probably amongst the worst we’ve ever seen. 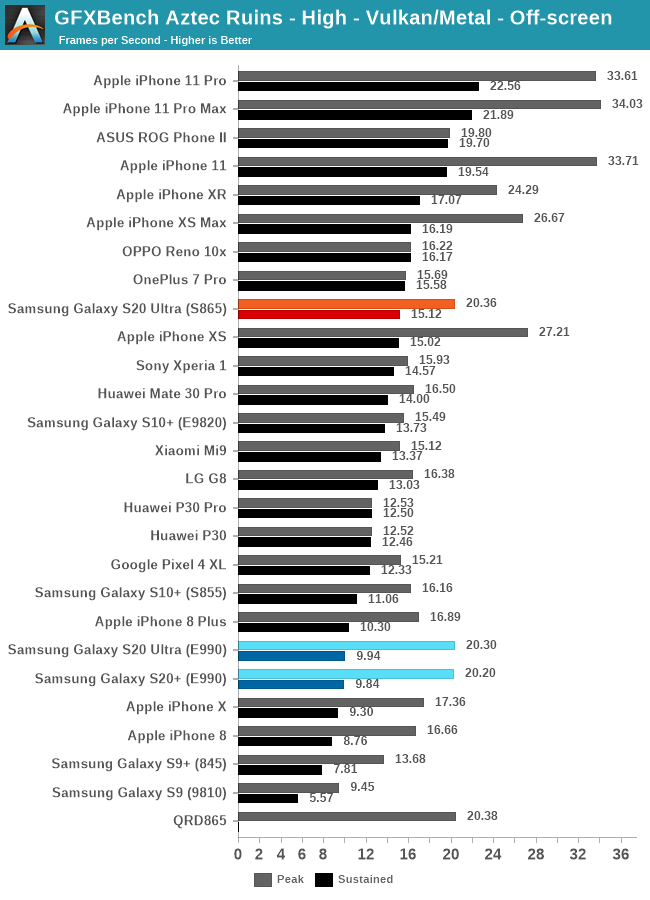 Moving onto GFXBench, we arrive on a familiar playing field. Peak performance of the two chips is identical, however the Exynos chip throttles significantly more. The sustained performance results here are horrible for the Exynos 990 as it’s faring worse than what we had measured on the Exynos 9820 in the S10+.

Looking at the power measurements of Aztec high, there’s quite the big efficiency differences between the two SoCs. We had already noted that the new Qualcomm Snapdragon 865 had beat our expectations in terms of power efficiency here, sporting very big upgrades compared to the S855. The Exynos 990 on the other hand is quite disappointing in its advancements. It’s a bit better in terms of efficiency, due to it achieving higher performance, but it comes at a higher power cost. 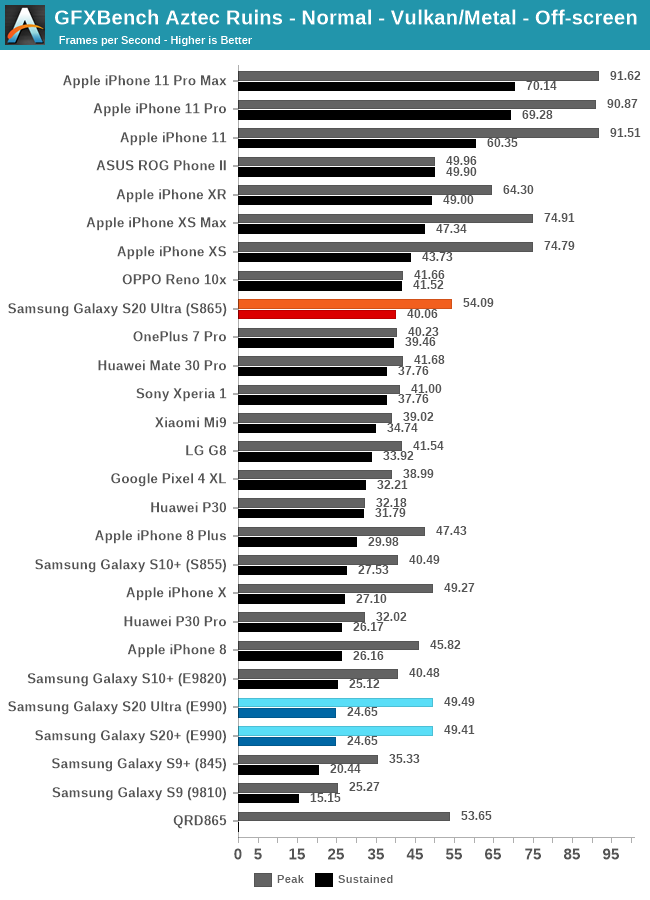 We’re largely seeing the same scaling in Aztec Normal, with the Snapdragon variant leading in power efficiency by 35%. 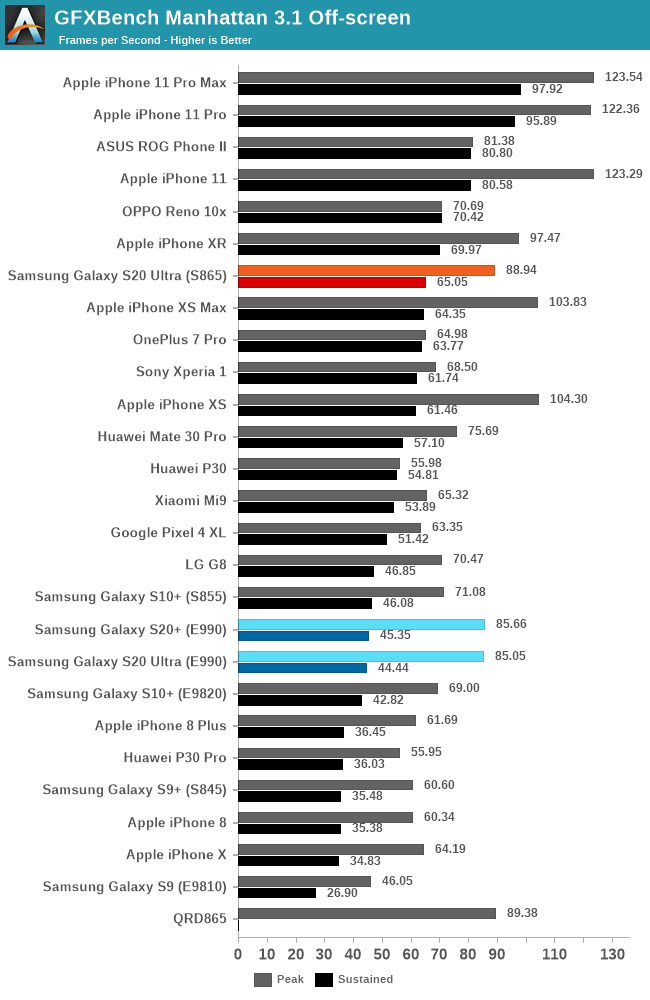 Manhattan 3.1 also isn’t kind to the Exynos S20. The worst figure here is the fact that these S20 variants are barely any faster than the S10 in their sustained performance figures, meaning there’s zero generational improvements. 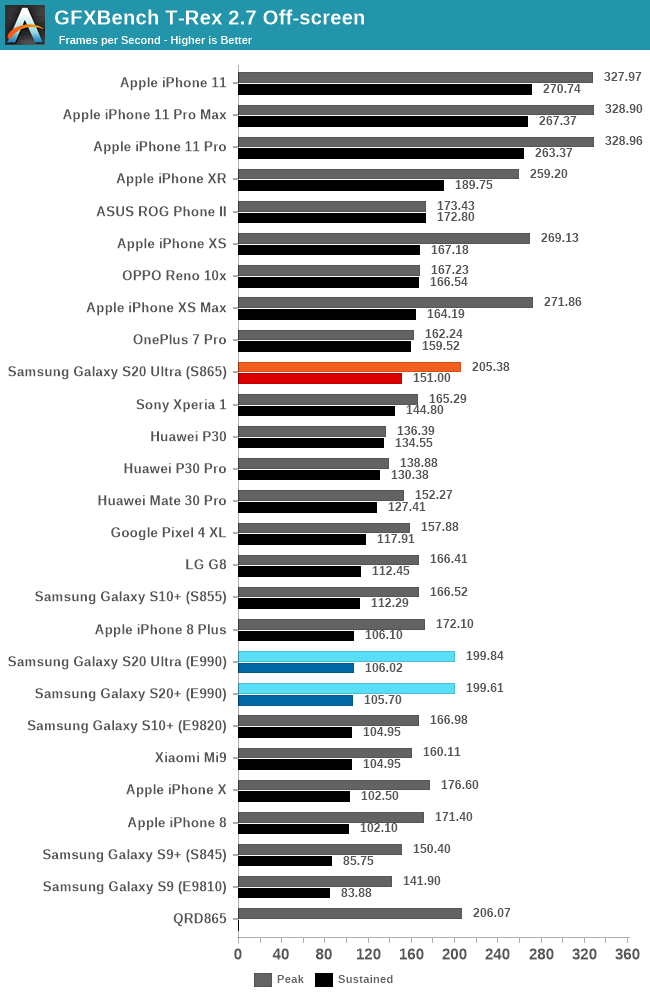 Finally, in T-Rex, things are again quite horrible for the Exynos chip. Sustained performance is a little over half the peak performance figures as the chip suffers from major thermal throttling. Looking at the power draw, we’re reaching an awful 5.63W which is notably worse than the Exynos 9820.

Neither the Snapdragon 865 nor the Exynos 990 variants of the S20 are particularly impressive when it comes to GPU performance.

Starting off with the Snapdragon 865, Qualcomm did excellent in terms of their power efficiency and managing to reduce total power consumption compared to the Snapdragon 855. However the chip is still being curb-stomped by last two generation of Apple SoCs, and there's a lot of catching up to do in this regard.

From a device-standpoint, the Snapdragon S865 S20 barely performed any better than some of the more gaming optimized Snapdragon 855 devices from last year. The silver lining here is that both variants of the phones have outstandingly good thermal characteristics, and are usually not allowed to exceed around 42°C peak skin temperatures.

The Exynos 990 S20 variants are an outright disaster in their gaming performance. The best-case scenario here is that the new phones barely match last year’s Exynos 9820 in sustained performance, with the S20 Ultra behaving extra weirdly and sometimes falling even further behind in performance than that.

For attentive readers who noted the MediaTek Dimensity 1000L in the tables, that’s because I wanted to give some sort of notion of the Mali-G77 in a different SoC. That unfortunately didn’t help too much, as the performance points of the two chips are far too apart to come to any conclusion. What’s clear here is that SLSI clocked the GPU very high to match the peak performance figures of the Snapdragon 865, but it comes at the great cost of higher power consumption at those high frequencies.

The results of the Exynos 990 here reminded me of those of the Kirin 960 and Kirin 970 a few years back. Those parts also came out with some inexplicably horrible power figures, which I've since then heard that the matter was blamed on the use of beta GPU RTL as well as early process PDKs. Ultimately, whether it's due to Samsung's 7LPP process node or the implementation of the Mali-G77 GPU IP, the end result is that the Exynos 990 here just stinks, and those variants of the S20 have to make due with a second-tier experience.