The new SoC generations also bring with them new AI capabilities, however things are quite different in terms of their capabilities. We saw the Snapdragon 865 add to the table a whole lot of new Tensor core performance which should accelerate ML workloads, but the software still plays a big role in being able to extract that capability out of the hardware.

Samsung’s Exynos 990 is quite odd here in this regard, the company quoted the SoC’s NPU and DSP being able to deliver a 10TOPs but it’s not clear how this figure is broken down. SLSI has also been able to take advantage of the new Mali-G77 GPU and its ML abilities, exposing them through NNAPI.

We’re skipping AIMark for today’s test as the benchmark couldn’t support hardware acceleration for either device, lacking updated support for neither Qualcomm’s or SLSI’s ML SDK’s. We thus fall back to AIBenchmark 3, which uses NNAPI acceleration.

We’re publishing one-shot inference times. The difference here to sustained performance inference times is that these figures have more timing overhead on the part of the software stack from initializing the test to actually executing the computation. 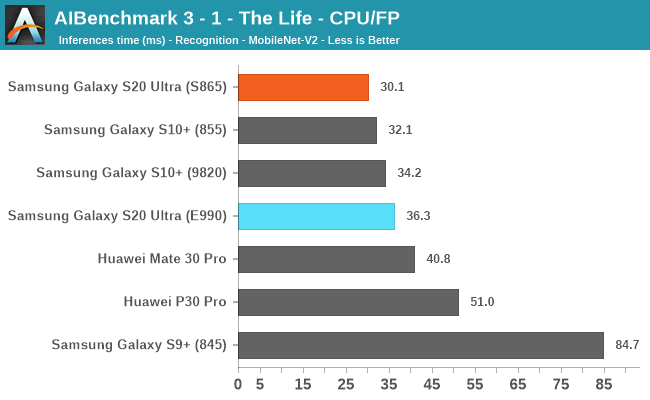 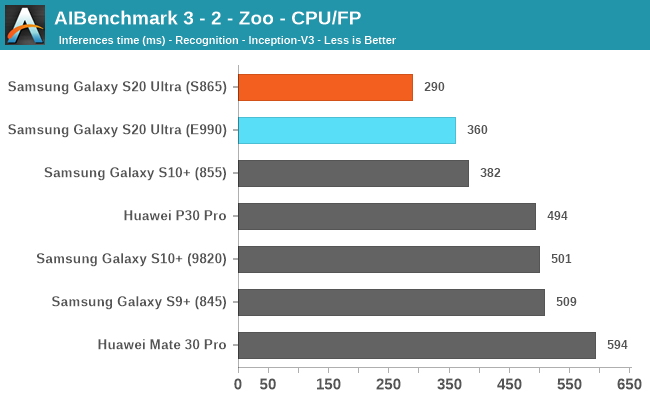 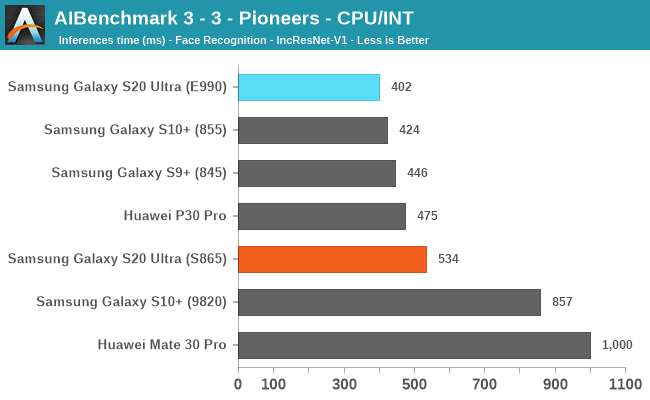 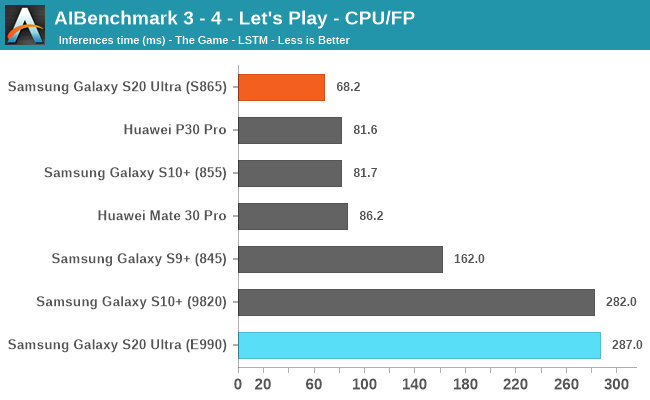 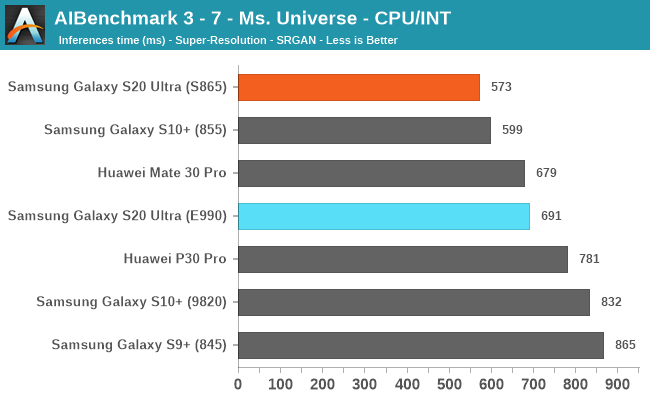 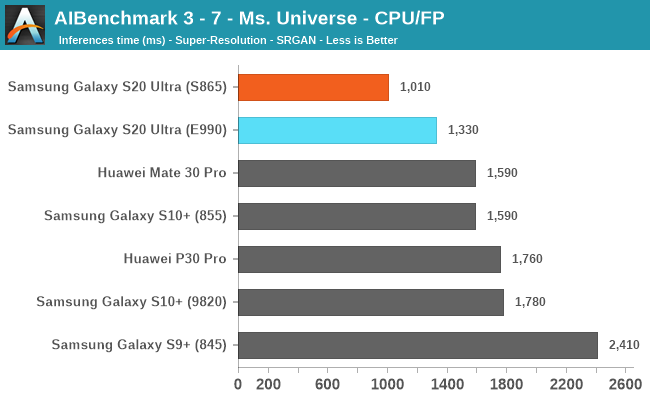 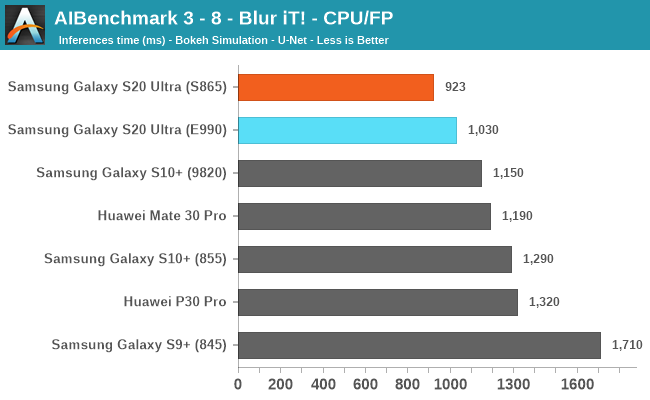 In the purely CPU accelerated workloads, we’re seeing both phones performing very well, but the Snapdragon 865’s A77 cores here are evidently in the lead by a good margin. It’s to be noted that the scores are also updated for the S10 phones – I noted a big performance boost with the Android 10 updates and the newer NNAPI versions of the test. 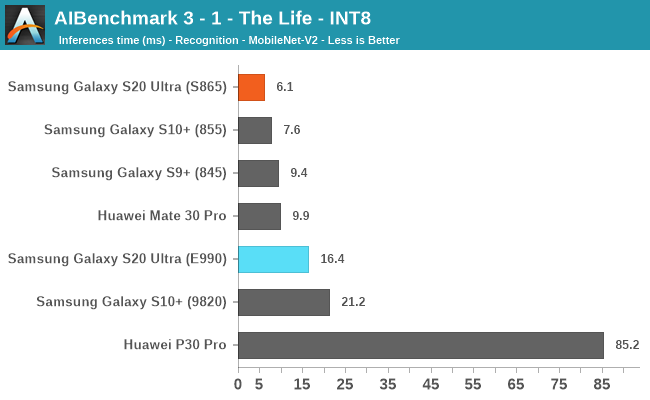 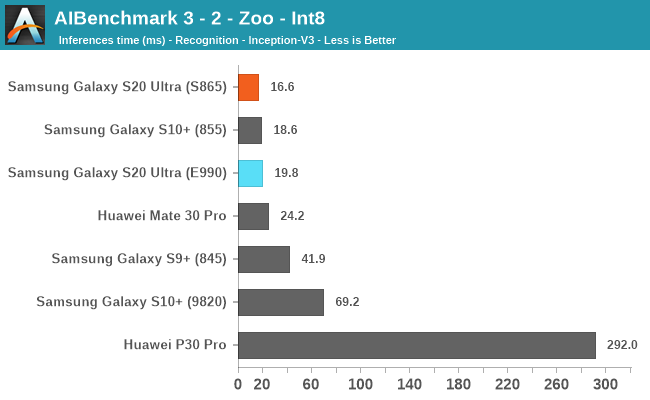 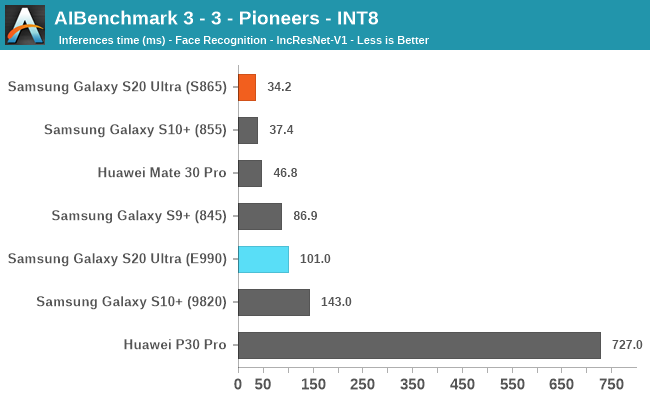 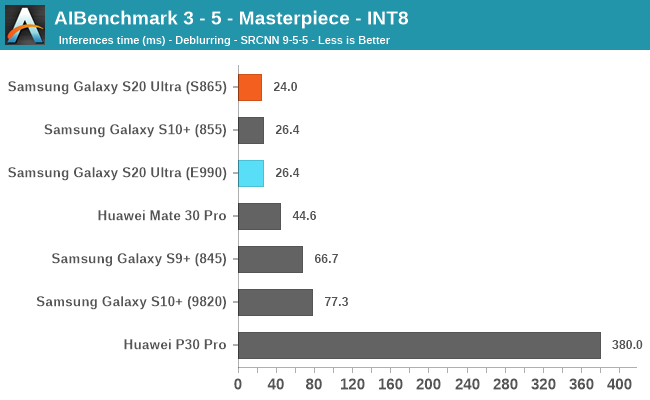 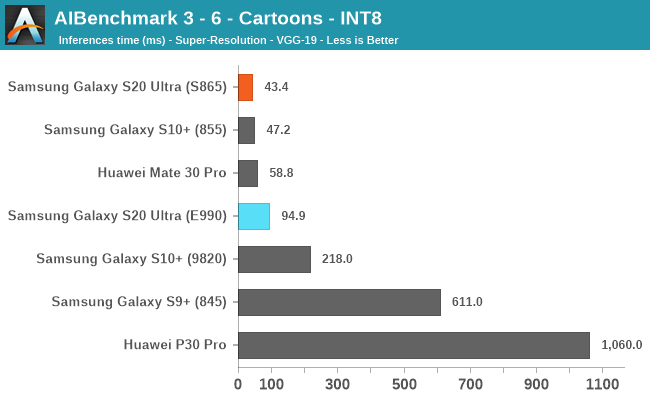 Integer ML workloads on both phones is good, but because the Snapdragon 865 leverages the Hexagon DSP cores for such workload types, it’s much in lead ahead of the Exynos 990 S20. This latter variant however also showcases some very big performance improvements compared to its predecessor. I still think that Samsung here is only exposing the GPU of the SoC for NNAPI, but because of the new microarchitecture being able to accelerate ML workloads, we’re seeing a big performance improvement compared to the Exynos 9820. 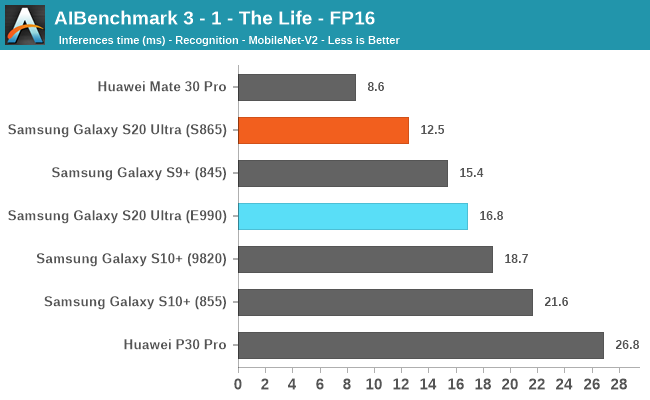 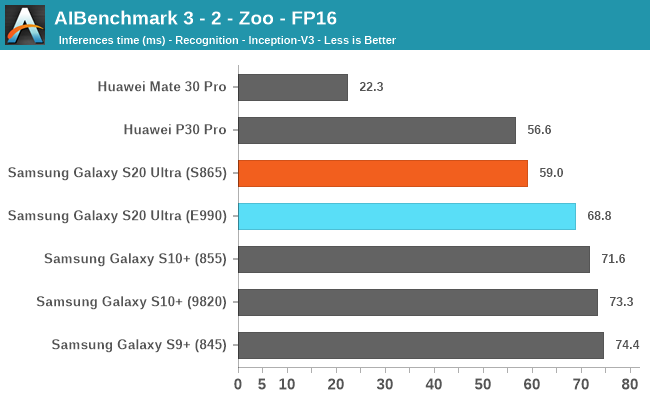 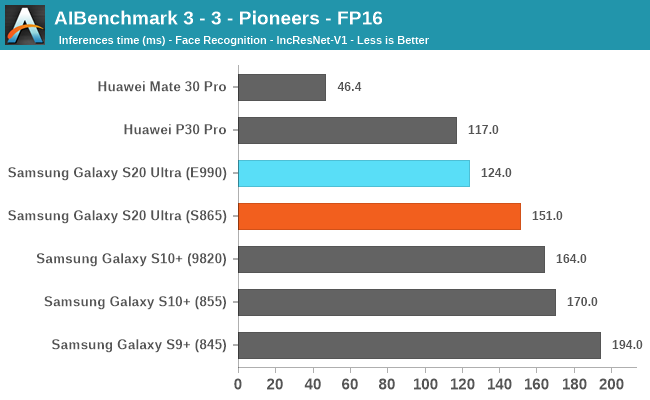 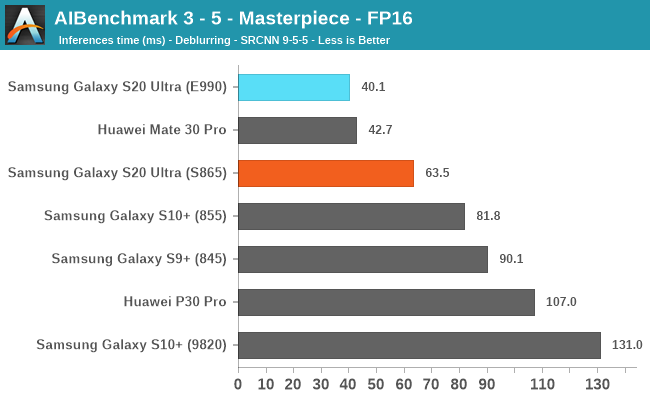 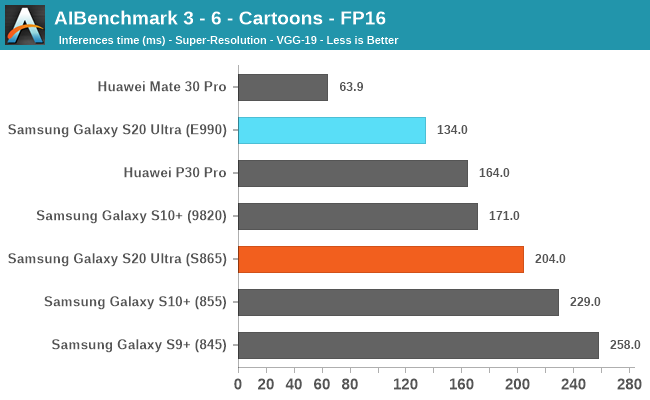 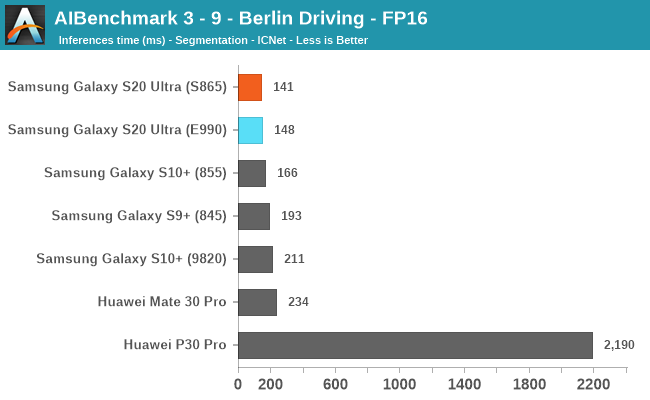 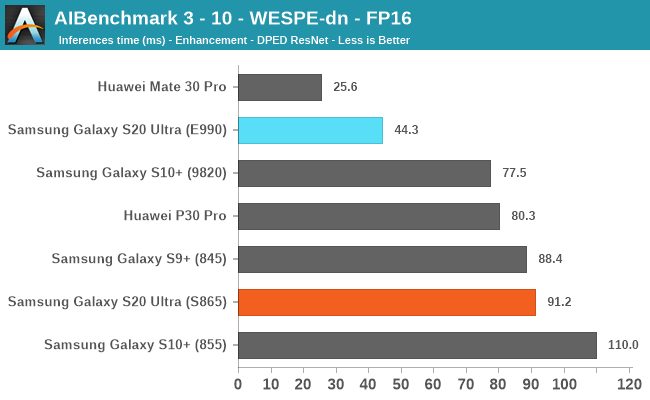 In FP16 workloads, the Exynos 990’s GPU actually manages to more often outperform the Snapdragon 865’s Adreno unit. In workloads that allow it, HiSilicon’s NPU still is far in the lead in workloads as it support FP16 acceleration which isn’t present on either the Snapdragon or Exynos SoCs – both falling back to their GPUs. 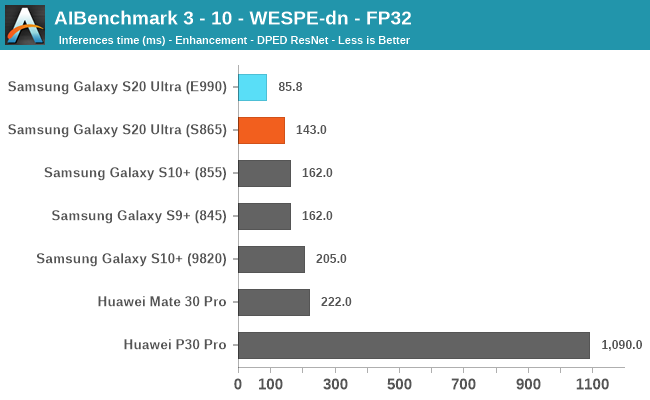 Finally, FP32 also again uses the GPU of each SoC, and again the Exynos 990 presents quite a large performance lead ahead of the Snapdragon 865 unit.

It’s certainly encouraging to see the Samsung SoC keep up with the Snapdragon variant of the S20, pointing out that other vendors now finally are paying better attention to their ML capabilities. We don’t know much at all about the DSP or the NPU of the Exynos 990 as Samsung’s EDEN AI SDK is still not public – I hope that they finally open up more and allow third-party developers to take advantage of the available hardware.