Video quality on the phones on the main sensors and the usual 4K30 and 4K60 recording modes are excellent, with details and dynamic range being excellent. The above video samples this year remain in the default SDR recording profile, as Samsung HDR+ recording a “Labs” feature, and we saw it have quite the complication last year on the S10 series.

One thing I want to make note about the S20 Ultra is that a lot of people were complaining about focus issues of the camera, and I indeed also encountered that phenomenon, with some horrible results on the Snapdragon S20 Ultra (4K30 video sample). Fortunately, Samsung had already released a firmware update which fixed the issue on the Exynos model, and the sensor’s new PDAF system almost equally as fast as the dual-pixel PD of the Galaxy S20+.

A new video recording feature of the S20 series is the “Super Steady” mode. This mode is limited to FHD resolution and uses digital stabilisation to produce – well, a super steady video recording. The quality here however isn’t great, because what the phone is actually doing is cropping into a stabilised frame of the Ultra-Wide-Angle camera module, not being able to use the other camera modules at all even though the UI is a bit misleading in allowing you to switch between wide-angle and ultra-wide-angle perspectives. 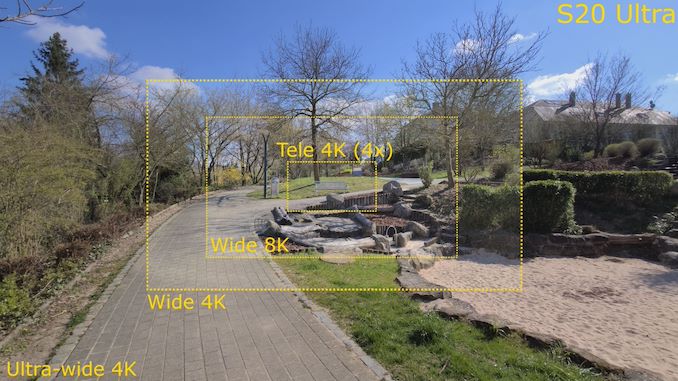 Before going into the 8K samples, we have to talk a bit about how the phones actually achieve this. On the S20 Ultra, 8K recording obviously only is able to be done through the primary 108MP camera sensor as it’s the only unit with sufficient resolution to actually support it. The problem is, that the camera sensor isn’t able to super-sample the 8K video recording across the whole camera sensor, and instead uses a 1:1 crop of pixels of the sensor. Because the sensor’s native resolution is 12000 x 9000, it means it has to crop quite a bit to end up at the 8K video recording resolution of 7680 x 4320, resulting in a narrowed field-of-view, as you see in the above superimposed snapshots of the different video modes. 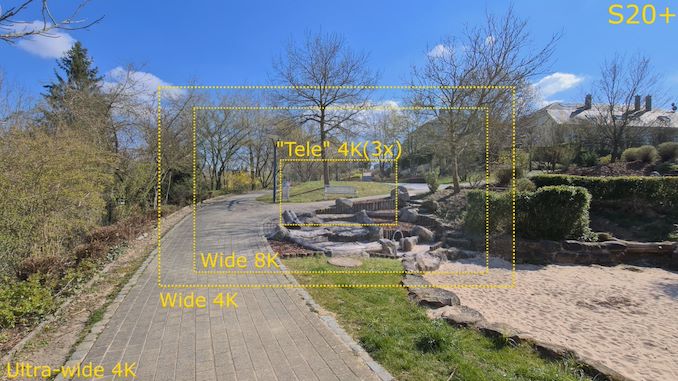 The S20+ on the other hand uses the secondary wide-angle module – again that’s simply because it’s the only module that is sufficiently high resolution to support the 8K resolution. Its native resolution here is only 9248 x 6936, meaning that it only has to crop a relatively smaller region of the sensor to fit in the 8K video frame. It means that the S20+ actually has a wider 8K field of view than the S20 Ultra, which I actually find to be much preferable for most use-cases.

The funny thing is that I have a hard time evaluating the video quality as currently I don’t even have any display in the house that’s able to natively display the full 8K video. If you’re lucky enough to have an 8K TV at home, I probably recommend casting the YouTube video to that device. For us mere mortals with 4K displays, all I can say is that the video looks absurdly sharp, and almost every frame of the video is almost the quality of a still camera capture.

Usually you’re used to digital cropping to be a mess, but even at up to 6x magnification within the video things still astoundingly good. I noted focusing is a bit slower on all the phones, and the S20+ really didn’t like switching over to close objects. Taking a few steps back did help the phone find its bearings.

Overall, the results are just outstanding, and I’m looking forward to what people will be able to achieve with help of professional video editing and camera work.

The speakers on the S20 series have undergone a rather drastic redesign, most of it due to the phone’s front camera design. Because the front camera is now at the centre of the display, Samsung was no longer able to house the earpiece speaker right next to the usual earpiece grill location. On the S20 series, the actual speaker is now located below the front camera, with an audio channel leading to a sliver thin gap between the display glass and the device’s frame. This fundamentally changes the audio characteristics of the phone, and it’s not all positive. 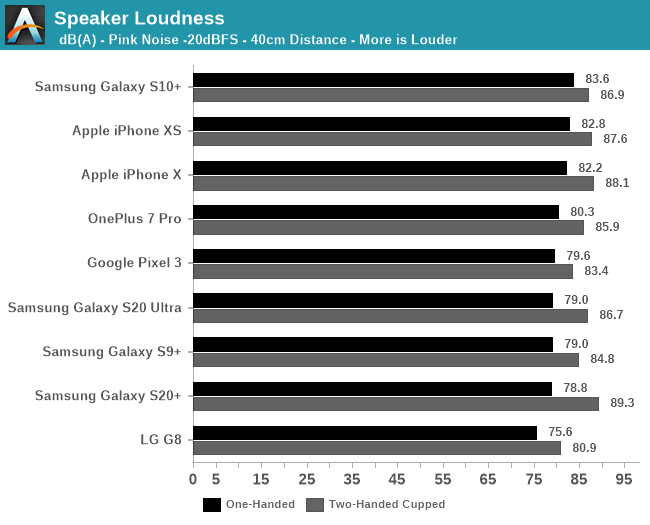 The biggest change is the fact that the new earpiece speaker is extremely loud, but also weirdly enough not very front directional. Holding the phone one-handed in portrait mode the phone doesn’t sound as loud as the S10+, but as soon as you hold it in landscape and use your palms as natural cups to focus the audio, the full brunt of the earpiece speaker is focused towards you. Interestingly enough, the smaller S20+ here becomes significantly louder, more-so than the S20 Ultra. 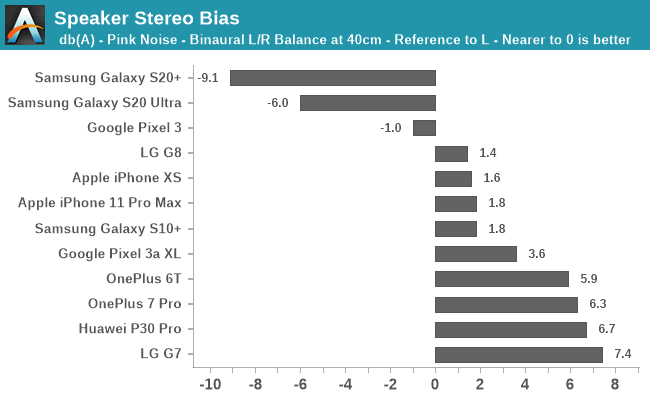 The new earpiece also largely overwhelms the bottom firing main speaker when it comes to loudness. The new speaker here is significantly bigger than that of the S10 series, and it has a fuller frequency response, particularly in the high-ends.

What this means that for generic pink noise and most other audio, you’ll have the impression that there’s a heavy bias towards the earpiece speaker, the complete opposite of what we’re used to as traditionally it’s been always biased towards the main speaker. 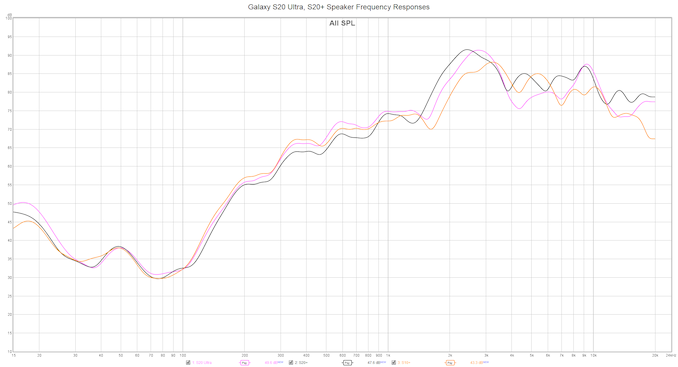 In terms of the actually audio quality, it’s still excellent, but it does have a different audio signature. The high-ends are a lot more pronounced on the S20 phones, which might need some getting used to.

The S20+ and the S20 Ultra also have somewhat different sound. Compared to the S10+, the S20+ definitely loses some “fullness”, and that’s due to the weaker low-mid ranges. The S20 Ultra is able to maintain more of these frequencies, and it sounds better than the S20+, more familiar to the sound of the S10+, but with the added clarity of the new more pronounced high-ends.

I do think that Samsung should tone down the earpiece speaker a bit - its high-end frequencies are maybe a bit too much and it just is a bit too loud in relation to the main speaker – particularly on the S20+. I could see some people being put off by the audio signature here as it is more tiring that that of the S10+.

And of course, I have to complain about the new phone’s lack of a 3.5mm headphone jack. With Samsung being the last major flagship vendor dropping the jack, it’s a nail to the coffin for the audio connector. Not too much to add here other than I’m disappointed in how things have devolved – all in the name of selling more accessories.