On the GPU side of things, testing the QRD865 is a bit complicated as we simply didn’t have enough time to run the device through our usual test methodology where we stress both peak as well as sustained performance of the chip. Thus, the results we’re able to present today solely address the peak performance characteristics of the new Adreno 650 GPU.

Disclaimer On Power: As with the CPU results, the GPU power measurements on the QRD865 are not as high confidence as on a commercial device, and the preliminary power and efficiency figures posted below might differ in final devices. 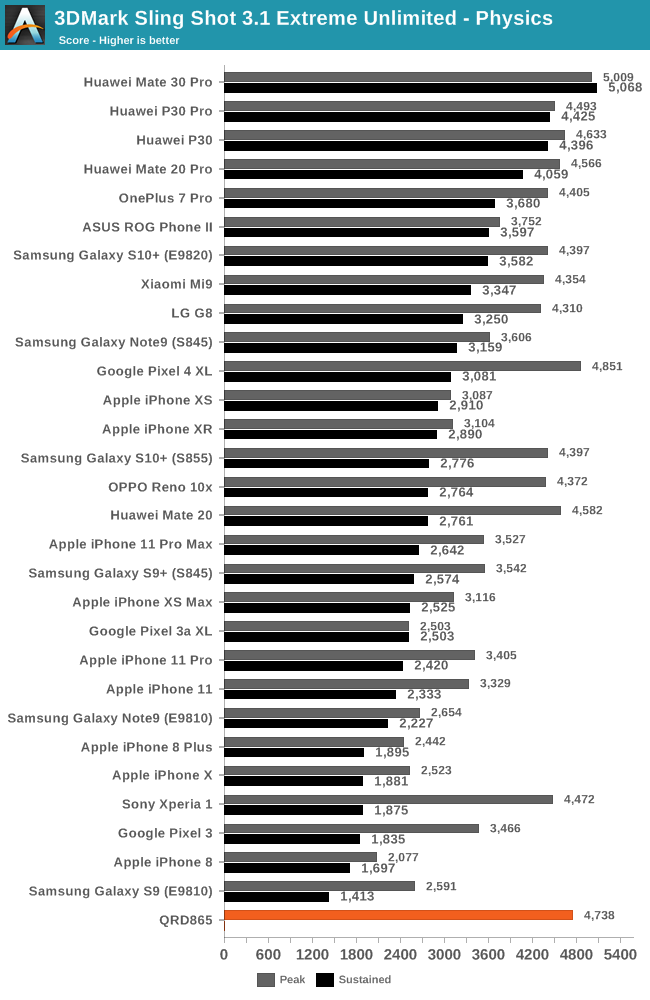 The 3DMark Physics tests is a CPU-bound benchmark within a GPU power constrained scenario. The QRD865 here oddly enough doesn’t showcase major improvements compared to its predecessor, in some cases actually being slightly slower than the Pixel 4 XL and also falling behind the Kirin 990 powered Mate 30 Pro even though the new Snapdragon has a microarchitectural advantage. It seems the A77 does very little in terms of improving the bottlenecks of this test. 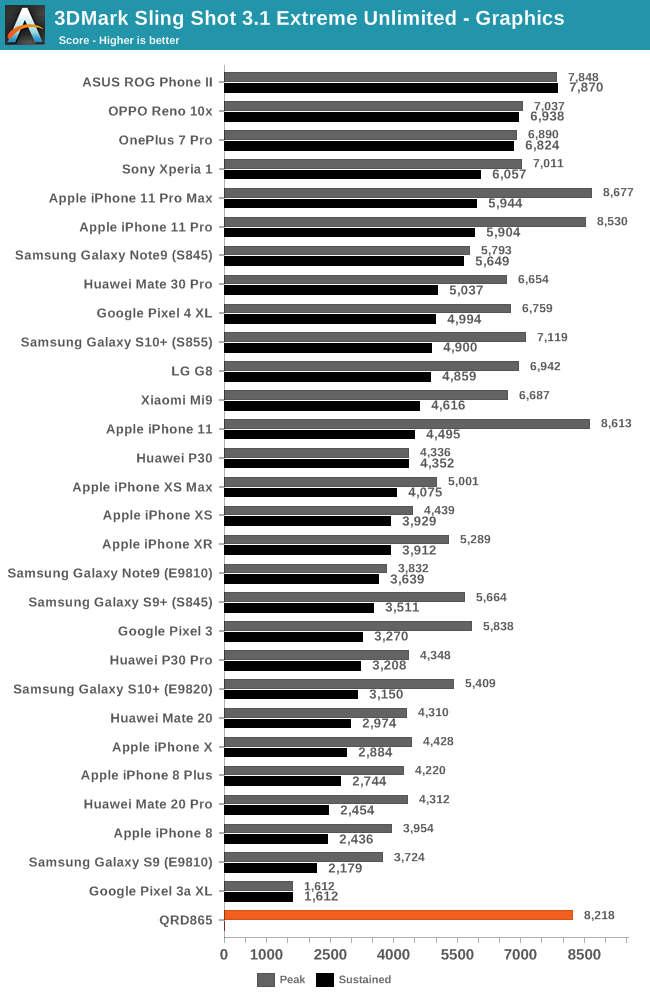 In the 3DMark Graphics test, the QRD865 results are more in line with what we expect of the GPU. Depending on which S855 you compare to, we’re seeing 15-22% improvements in the peak performance. 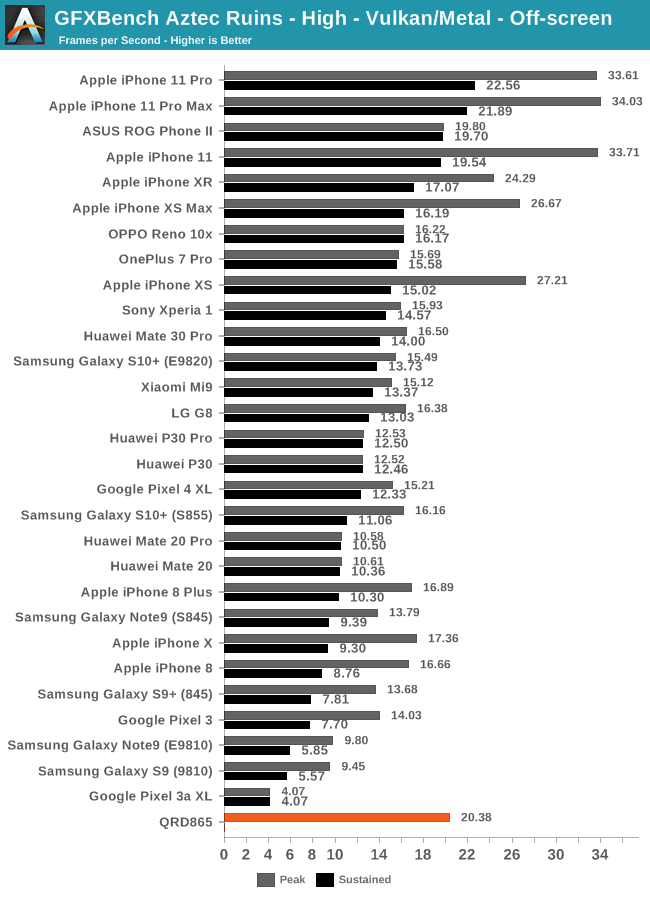 In the GFXBench Aztec High benchmark, the improvement over the Snapdragon 855 is roughly 26%. There’s one apparent issue here when looking at the chart rankings; although there’s an improvement in the peak performance, the end result is that the QRD865 still isn’t able to reach the sustained performance of Apple’s latest A13 phones.

Looking at the estimated power draw of the phone, it indeed does look like Qualcomm has been able to sustain the same power levels as the S855, but the improvements in performance and efficiency here aren’t enough to catch up to either the A12 or A13, with Apple being both ahead in terms of performance, power and efficiency. 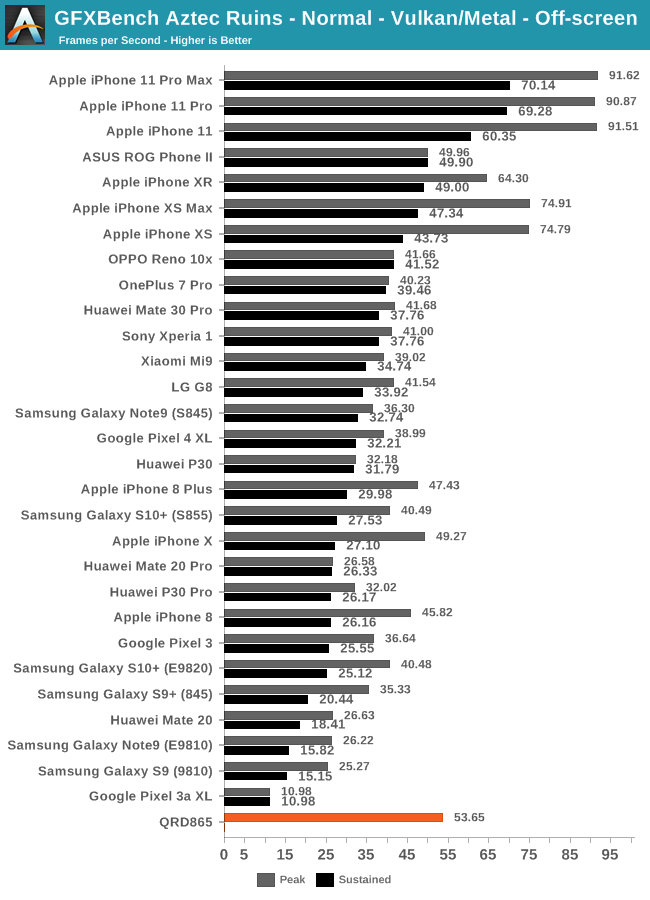 We’re seeing a similar scenario in the Normal variant of the Aztec test. Although the performance improvements here do match the promised figures, it’s not enough to catch up to Apple’s two latest SoC generations. 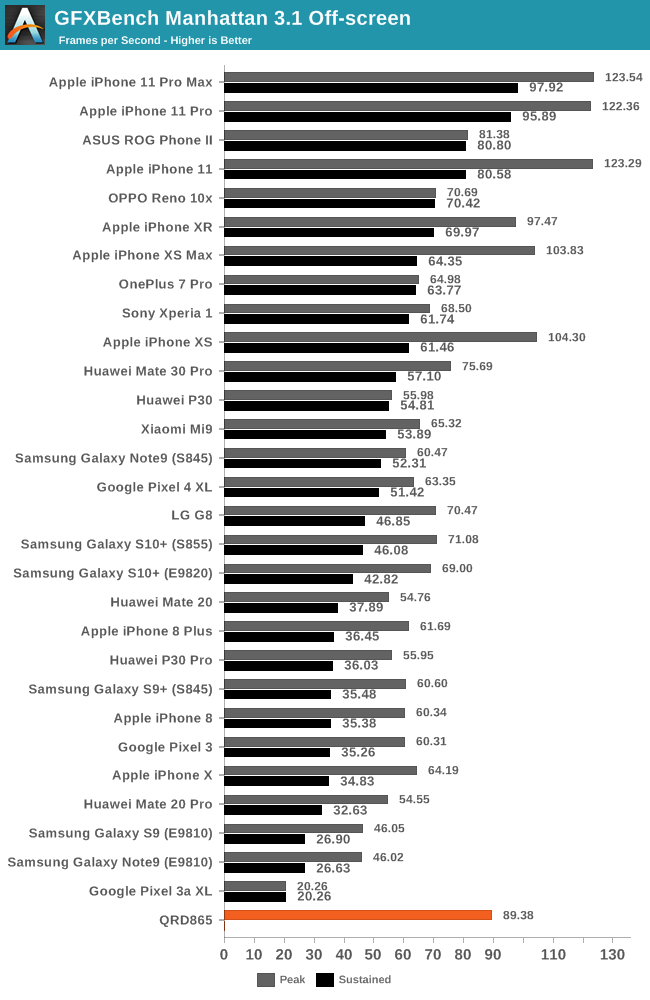 Even on the more traditional tests such as Manhattan 3.1, although again the Adreno 650 is able to showcase good improvements this generation, it seems that Qualcomm didn’t aim quite high enough. 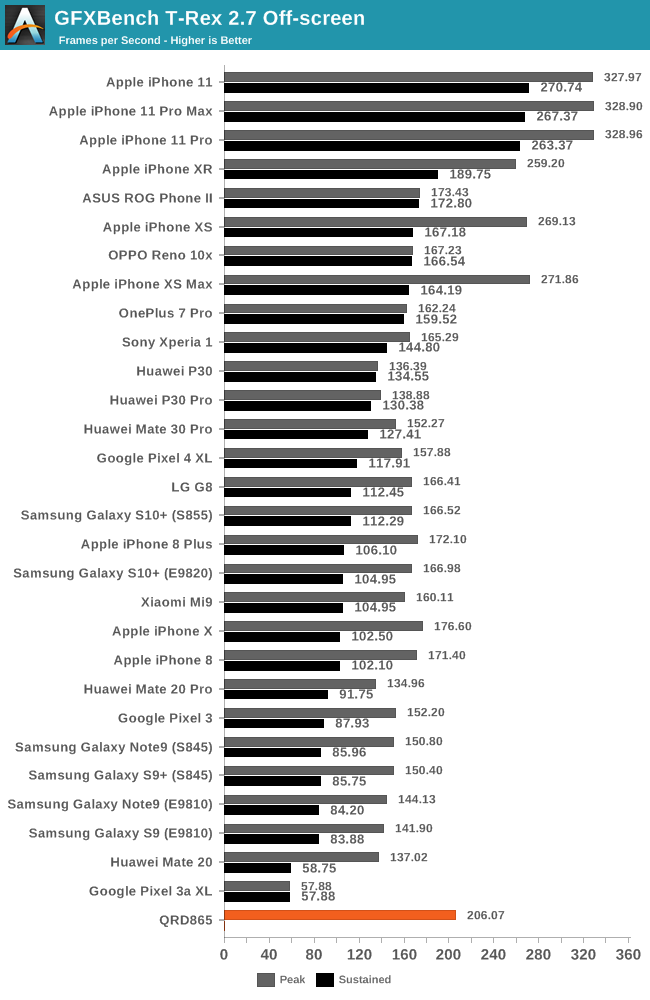 Lastly, the T-Rex benchmark which is the least compute heavy workload tested here, and mostly is bottlenecked by texture and fillrate throughput, sees a 23% increase for the Snapdragon 865.

Overall, we were able to verify the Snapdragon 865’s performance improvements and Qualcomm’s 25% claims seem to be largely accurate. The issue is that this doesn’t seem to be enough to keep up with the large improvements that Apple has been able to showcase over the last two generations.

During the chipset’s launch, Qualcomm was eager to mention that their product is able to showcase better long-term sustained performance than a competitor which “throttles within minutes”. While we don’t have confirmation as to whom exactly they were referring to, the data and narrative here only matches Apple’s device behaviour. Whilst we weren’t able to test the sustained performance of the QRD865 today, it unfortunately doesn’t really matter for Qualcomm as the Snapdragon 865 and Adreno 650’s peak performance falls in at a lower level than Apple’s A13 sustained performance.

Apple isn’t the only one Qualcomm has to worry about; the 25% performance increases this generation are within reach of Arm’s Mali-G77. In theory, Samsung’s Exynos 990 should be able to catch up with the Snapdragon 865. Qualcomm had been regarded as the mobile GPU leader over the last few years, but it’s clear that development has slowed down quite a lot recently, and the Adreno family has lost its crown.