Using the same TU116 GPU as the GTX 1660 Ti and the GTX 1660 (vanilla0, the voltages are unsurprisingly similar. 1.05v is essentially a universal limit for NVIDIA Turing GPUs at stock, while the idle voltage of 0.618v is a bit lower than what we’ve seen on other TU116 cards thus far.

The situation with clockspeeds is also very similar, though not entirely a carbon copy of the GTX 1660 (vanilla). Even with NVIDIA’s slightly higher TDP, our GTX 1660 Super card sees a very slight drop in clockspeeds, typically coming in one bin (15MHz, or under-1%) below the original card. In this case it’s a tradeoff we’re glad to take, since as we’ve just seen, the extra memory bandwidth on the GTX 1660 Super more than makes up for any clockspeed deficit, launching the Super card well ahead of its GDDR5-based predecessor.

In any case, the GTX 1660 Super once again comes in well ahead of NVIDIA’s official boost clock specifications. Even under The Division 2, average clockspeeds beat the spec by 60MHz, and in other games It’s more frequently 75 to 90MHz above. 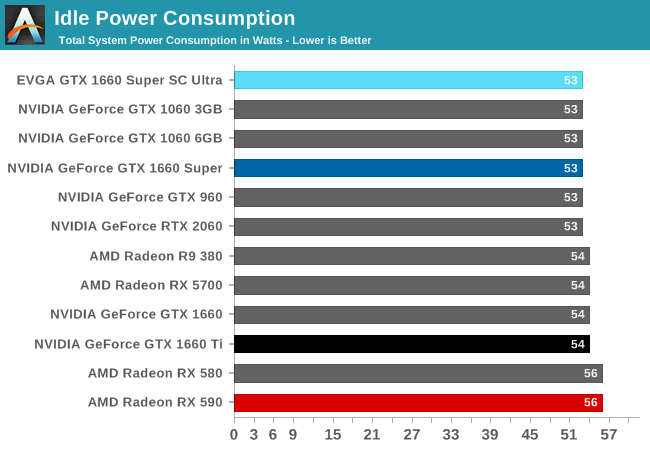 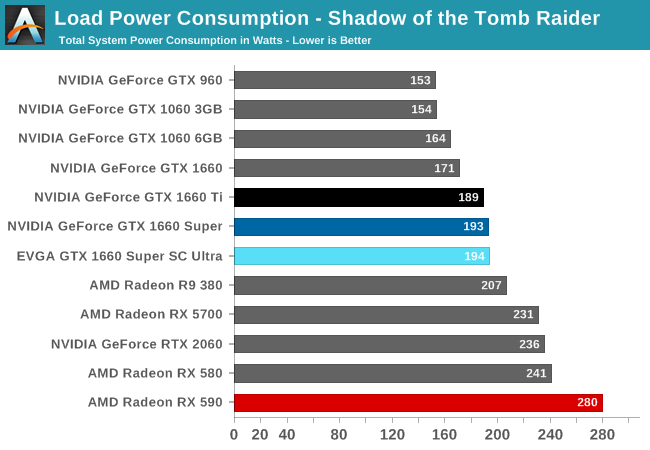 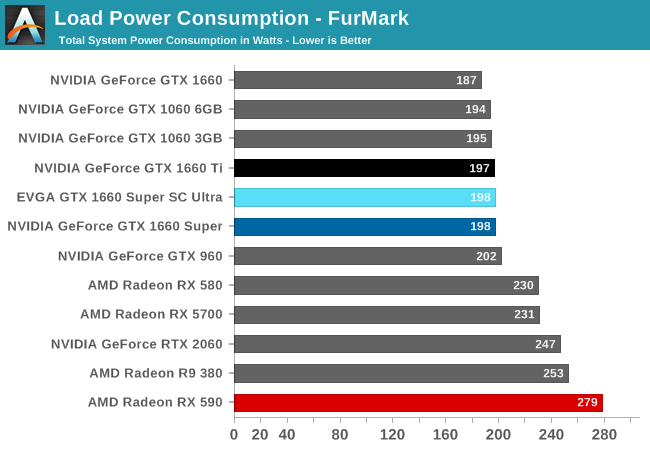 Shifting to power consumption, our results are in line with NVIDIA’s specifications, as well as what we’d expect for yet another TU116 card. With its 125W TGP, the GTX 1660 Super draws ever so slightly more power than either the GTX 1660 Ti or the GTX 1660, particularly in Tomb Raider where the CPU gets a bit more of a workout as well. But on the whole, it’s right in the ballpark with other 120W(ish) NVIDIA cards, with power consumption at the wall for the entire testbed not exceeding 200W.

For the midrange segment, the GTX 1660 Super (and the GTX 1660 Ti) are the cards to beat when it comes to power consumption and efficiency. Everything else at this power level performs much slower, or it’s faster while requiring more power. Though faster cards aren’t too far off, as the RX 5700 can attest to. 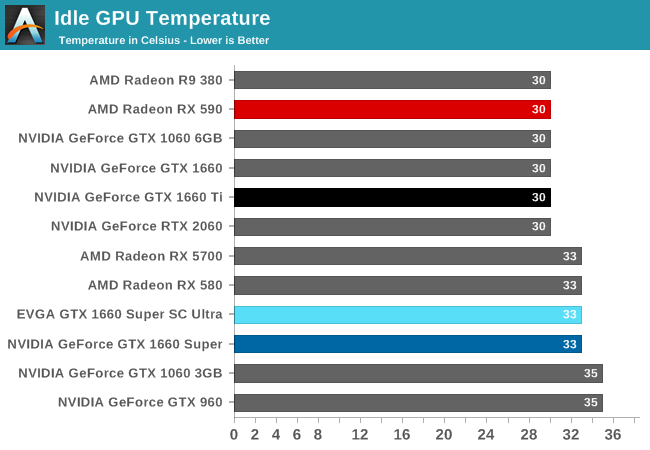 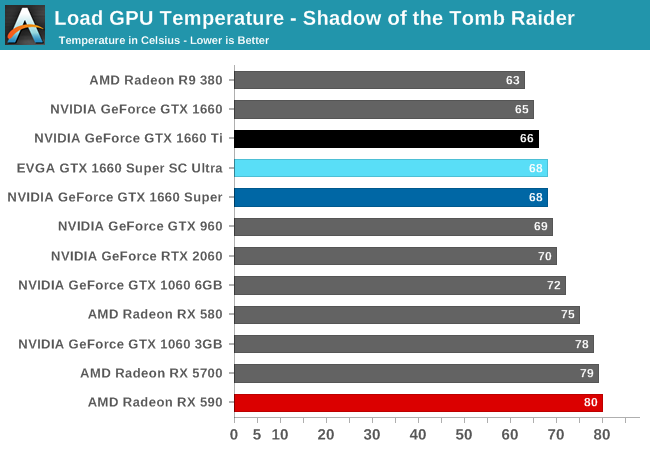 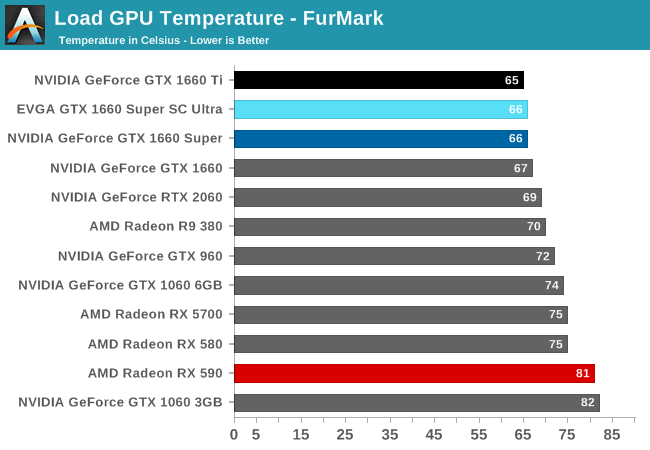 As for temperatures, EVGA has delivered one cool running card. Even at its full, factory overclocked speeds, the EVGA GTX 1660 Super SC Ultra never cracks 70C, and under FurMark’s pathological workload it’s the second-quietest card in these cards. 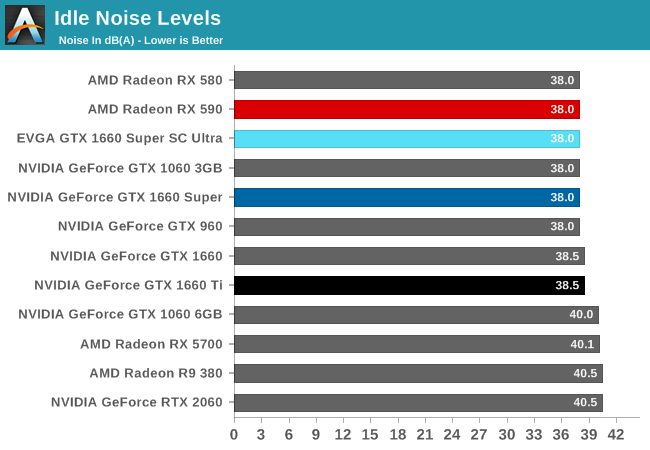 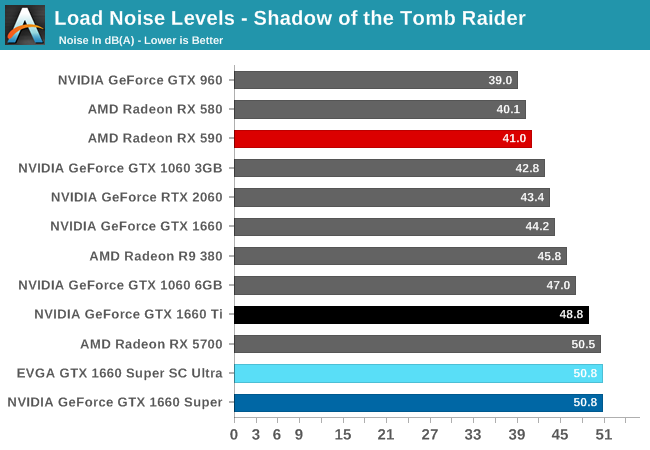 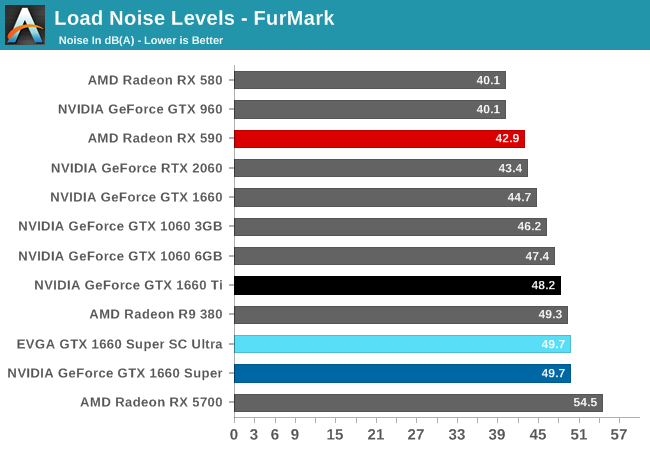 The tradeoff for those temperatures, however, is noise. The EVGA card that delivers chart-topping temperatures also delivers some of the worst noise results among this collection of cards.

The culprit here would seem to be EVGA’s decision to bias the card towards cooling performance rather than acoustics. Which given how far the card is from its 83C thermal throttle point, seems overdone. EVGA could easily back off on the fan speed a bit, let the temperatures drift up to the low 70s, and deliver essentially the same gaming performance (perhaps losing 1 bin in the process) while generating a lot less noise. We have a number of 120W open air cards in these cards, including the GTX 1660 3GB and GTX 960, both of which move just as much heat with much less noise, so it can be done. And, to be fair to EVGA here, their SC Ultra card is by no means a tornado, barely hitting 50 dB(A) in these intensive, open case tests, but the best cards strike a proper balance between noise and performance, maximizing the latter while minimizing the former.

Ultimately, I suspect part of the engineering challenge EVGA is dealing with here is that the SC Ultra cooler is their smallest GTX 1660 cooler. The triple-slot XC cards (represented here with the GTX 1660 Ti and GTX 1660) have just one fan and much bigger heatsinks to work with. Similarly, EVGA also sells longer dual-slot cards (also called XC) which get the benefit of a longer heatsink. The physics of more heatsink mass (and more/bigger fins) can’t be ignored, which is why smaller cards often need to run faster fans. Still, even if the SC Ultra cooler isn’t particularly big, I do think there’s room for a better fan balance here. 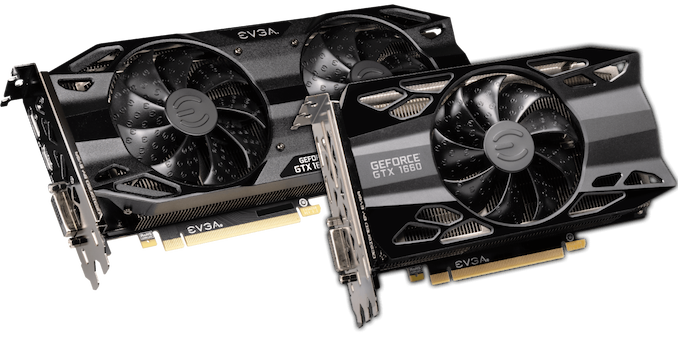 Tangentially, as I mentioned in the EVGA SC Ultra overview, this is actually our second card. The original was even hotter and louder; it reached 75C and 54.6 dB(A) under Tomb Raider in that test. Considering that these GTX 1660 Super cards are operating near or at their power limits and are TDP-capped by the VRMs and monitoring hardware – and thus, one card can’t draw significantly more power than another identical card – it points to a cooling problem with the card itself. EVGA has since taken the card back to figure out what’s going on, but I suspect what they’ll find is poor thermal transfer between the GPU and heatsink, perhaps due to a bad TIM application or a problem with the heatpipes. Ultimately it’s rare that we get dud video cards, but it does happen now and then.