Eurocom offers a wide-range of MXM modules to outfit the Sky X7C as desired, starting at the NVIDIA GTX 1060, and going all the way up to the same RTX 2080 that powers this review unit. The RTX 2080 is currently sits at the top of the product stack for notebook computers, and will likely remain that way for some time unless NVIDIA decides to give the RTX notebook lineup the Super treatment. That does seem unlikely, since one of the biggest changes to the latest RTX Super cards is increased power draw, which is something notebooks would struggle with. NVIDIA rates the RTX 2080 at 80-150W+ officially, meaning there’s a lot of room for the manufacturer to tweak the power draw of the card to match the device it is in, and we’ve already seen that this can play a big factor in overall performance, especially in thin and light laptops. 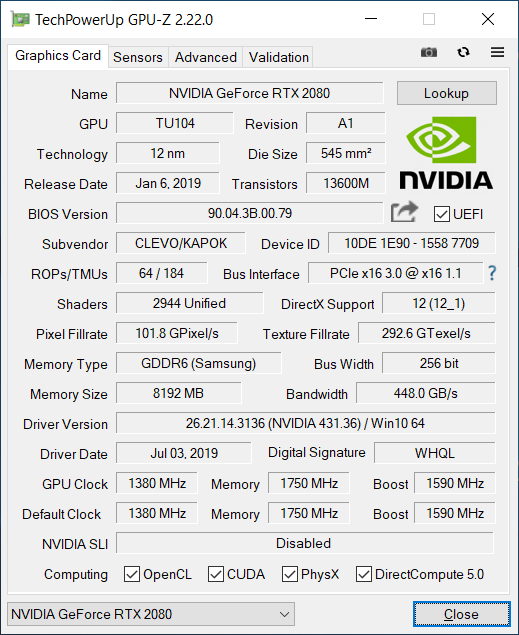 As an MXM3 module, the Eurocom Sky X7C also offers some upgradability in the GPU department as well, although finding and replacing MXM cards can be an expensive upgrade, but it is at least an option that smaller, soldered notebooks do not even offer.

To see how the Eurocom Sky X7C performs, it’s been tested against a couple of synthetics, and our gaming laptop suite of games. 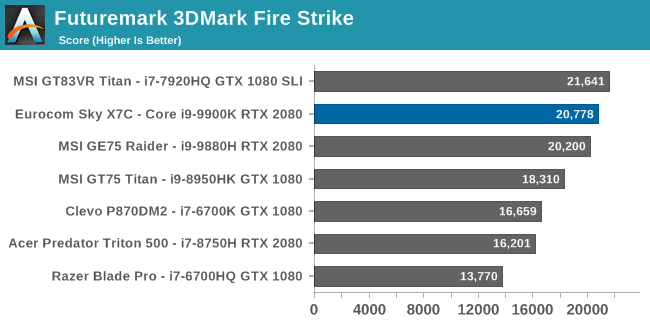 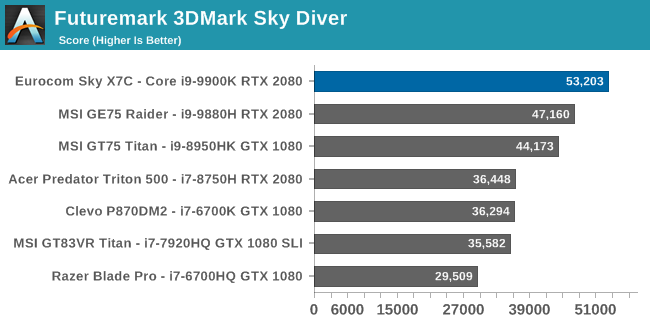 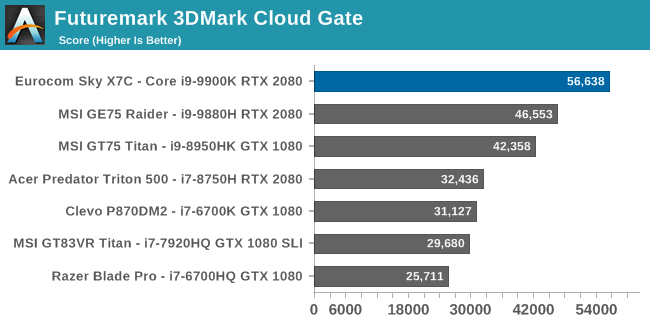 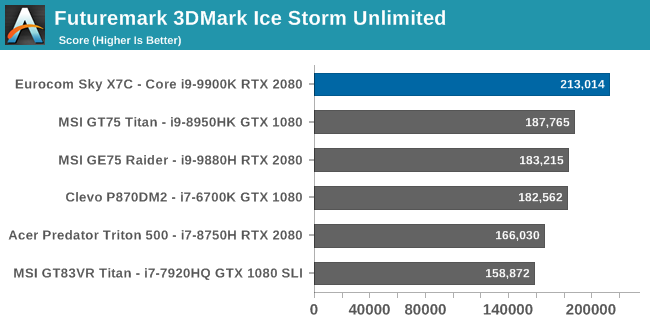 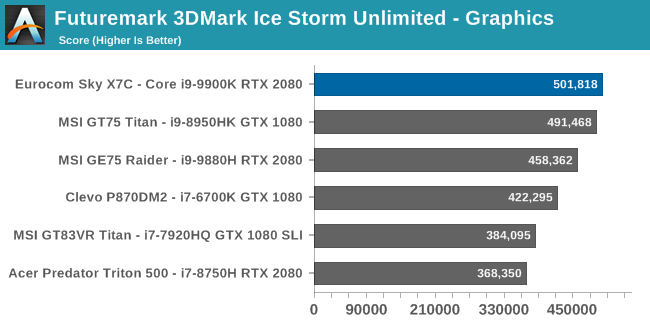 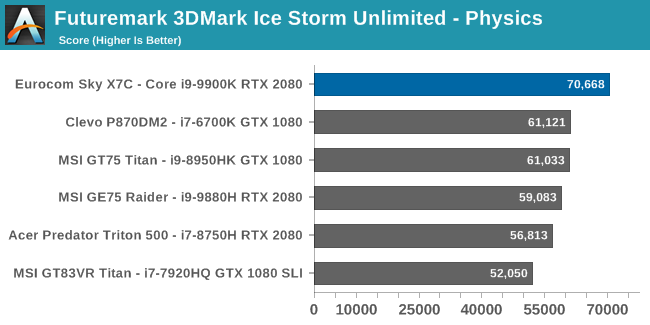 UL’s 3DMark offers a variety of tests, from the very demanding Fire Strike down to Ice Storm Unlimited, which can be run on a tablet. The Sky X7C is the fastest single-card laptop we’ve tested to date, unsurprisingly, and offers generally more performance than even the 1080 SLI GT83VR Titan, with the exception of Fire Strike which is the most GPU limited test of the bunch. As the tests get less GPU limited, the dramatically faster processor pulls the desktop replacement ahead and keeps it there for the rest of the tests.

GFXBench offers DX12 tests with the Aztec Ruins workloads, and as a test that is cross-platform and available for smartphones, it’s not much of a challenge for a system with this much performance. It does appear to be GPU limited though, with the Eurocom neck and neck with the MSI GE75 Raider. 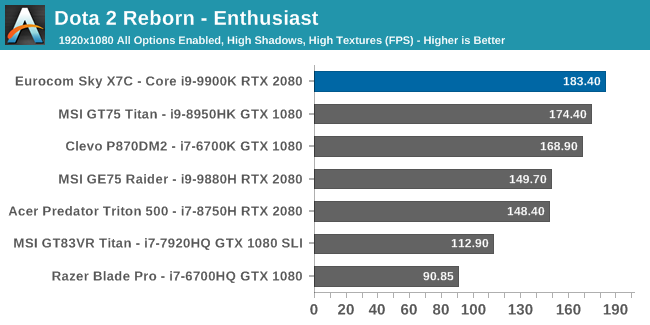 One of the most popular arena battle games is Dota 2, and although this is a game that can be run even on integrated graphics, it can be CPU limited, and the Core i9-9900K drags the Eurocom well ahead of any other RTX 2080 laptop we’ve tested. 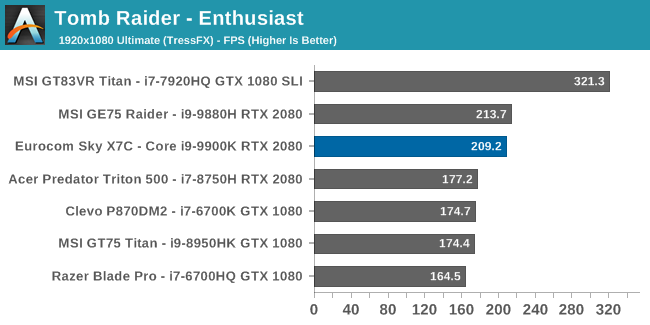 The original Tomb Raider can still be a challenge for some gaming laptops with lighter GPUs, but not so much for an RTX 2080. 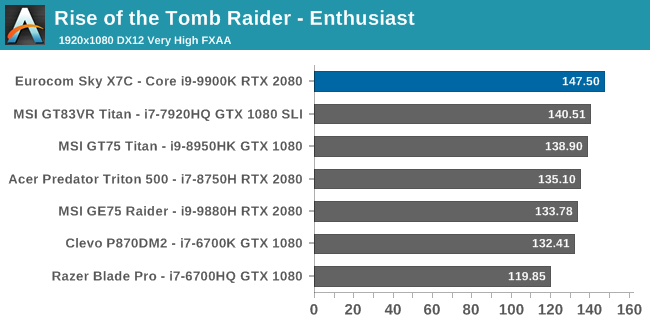 The second installment of the latest Lara Croft series is much more demanding than the original, with some breathtaking imagery in the game. The Eurocom jumps to the top again.

The most recent installment of the Tomb Raider series bumps the visuals yet again, and this DX12 title is still very challenging even at just 1920x1080. Although the Eurocom Sky X7C averages 116 FPS in this test, and is easily playable, that’s well below the refresh rate of many 1920x1080 laptop displays. 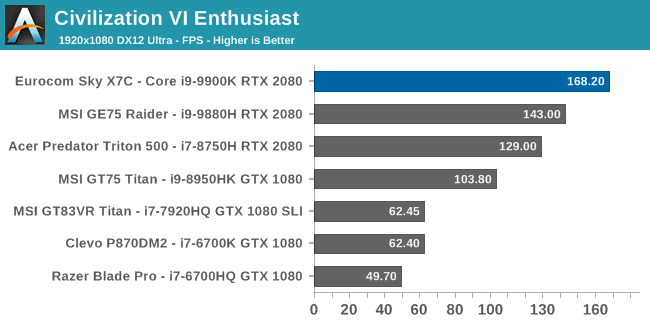 The current version of Civilization VI tends to be heavily CPU bound, especially on the end-of-turn, and the extra grunt of the Core i9-9900K really shows in this title. 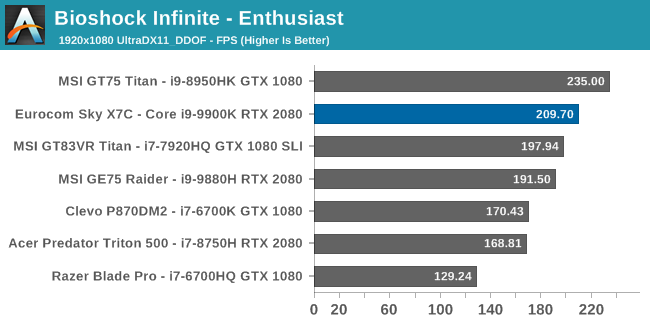 Bioshock was a great franchise, and it’s loss is a loss to all of us, but this game is not a challenge for so powerful a notebook. 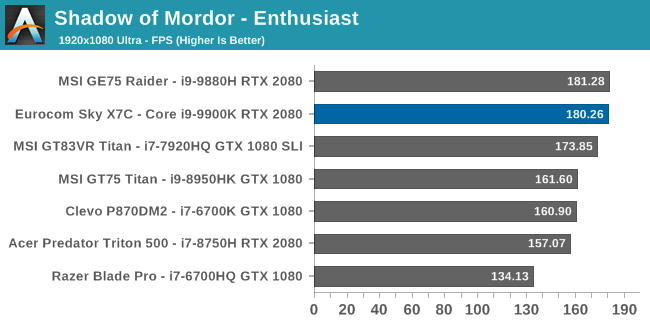 The first installment in this game set in Tolkein’s Middle Earth is easily playable on a modern system with an RTX 2080, and the Eurocom Sky X7C breezes through this test.

The latest version of the open world action role-playing series is more demanding of the GPU, and at the highest settings the Eurocom Sky X7C once again jumps to the top of the stack, although not much over the MSI GE75 Raider with the same GPU, meaning this game is more GPU bound than CPU.

We always like to include one of the games featuring Codemasters’s Ego engine, and that game is currently F1 2017. The Ego games tend to be more CPU limited than other titles, and that shows with our results.

Despite being a graphical showcase, Ubisoft’s Far Cry 5 is actually one of the most CPU limited of the big FPS games at the moment, so the extra grunt from the i9-9900K really shows through here, with a significant lead over the other RTX 2080 notebooks.

Although 1920x1080 has dominated gaming for some time, over the last couple of years there has been a surge in the number of high-resolution displays shipping with notebooks, and of course as a Desktop Replacement class computer, the Eurocom Sky X7C can easily be connected to an external display as well, so in addition to our normal 1920x1080 tests, the high-end gaming laptops of recent vintage have also been tested at both QHD and UHD resolutions. 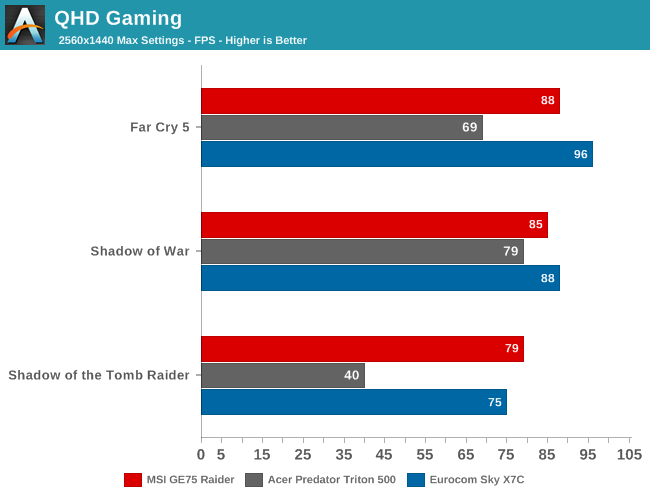 When gaming at QHD, even with the RTX 2080, there is still a significant framerate hit, although the faster processor in the Eurocom notebook still helps it pull ahead, especially in Far Cry 5 which is the most CPU limited game of the three. 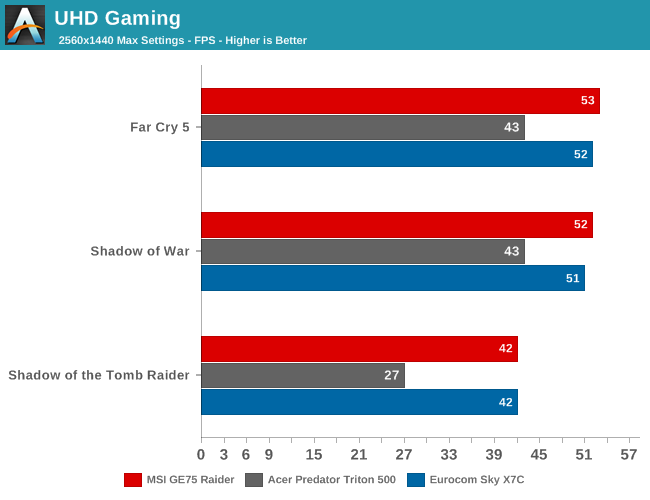 When stepping up to UHD though, the framerate average dips below the 60 FPS you would really prefer to see, even with a Core i9-9900K and RTX 2080 powering the system. If you want to game at UHD, even with the latest hardware you are going to need to adjust the settings to compensate for that resolution, whether manually or using something like the GeForce Experience software to configure the game settings.

This leads to the eternal question of whether gaming is better at UHD but 60 FPS or under, or 1920x1080 with a high-refresh display such as the 144 Hz IPS panel that has been shipping in the last generation. Luckily with the Eurocom Sky X7C, that choice is yours, since Eurocom will configure the X7C with either of those displays, or several others as well, including the 2560x1440 120 Hz panel. If I was buying, I would choose the 144 Hz 1920x1080 with G-SYNC for the ultimate in smoothness, but as with most things about this notebook, there is far more choice available than on most systems.