We’ve tested quite a few Clevo DTR notebooks over the years, and they are one of the rare class of mobile computer where they still offer a full socketed desktop class processor in a notebook form factor. The performance of a modern 45-Watt notebook CPU is somewhat amazing considering the thermal limits imposed by the design, and an eight-core, sixteen-thread Core i9-9880H is no slouch. But, stepping up to a desktop class CPU unlocks a significant amount of performance at the cost of a much higher TDP, and if you’ve followed our coverage of Intel’s TDP of late, the power delta is even higher than the numbers would suggest when discussing Intel’s socketed desktop processors compared to soldered in H-Series, since laptop processors do tend to stick to the rated TDP much more closely. 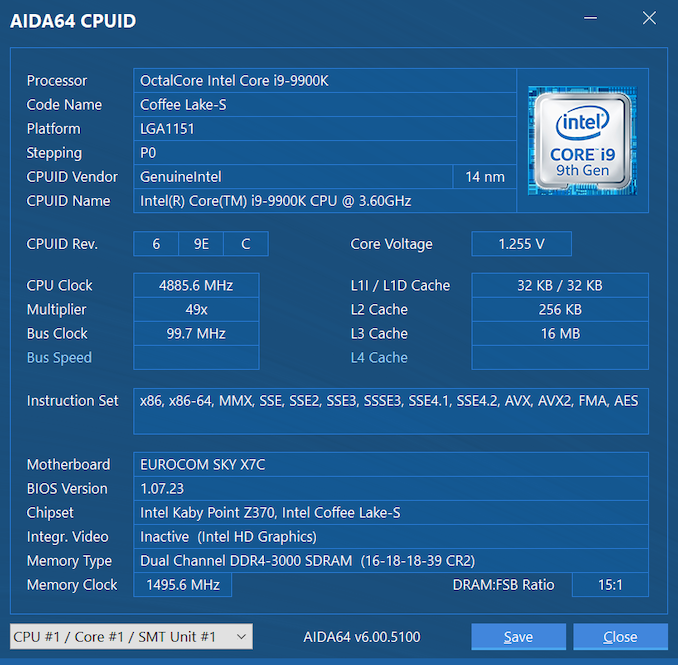 The elephant in the room is how well does a notebook computer deal with this increased power consumption, and more importantly how does it get rid of the heat, but this is where the Eurocom Sky X7C has the advantage of being a large form factor laptop, with plenty of room inside for heat pipes, heat sinks, and fans. We’ve tested thin and light gaming laptops that can struggle to cope, but that’s not the case for a notebook that weighs almost twice as much, and comes in almost twice as thick as one of the new breed of ultraportable gaming laptops.

The other major advantage of the socketed design for the end user is upgradability. It’s pretty rare in the notebook market to allow the end-user to upgrade the CPU thanks to it being soldered directly onto the motherboard, but this notebook, with its ample Z-Height, has no issues fitting in the socket and required components which provides an upgrade path for end users. Or at least until LGA1151 ceases to be available.

Our review unit is outfitted with the Core i9-9900K, which offers eight cores, sixteen threads, and a maximum boost frequency of 5.0 GHz with a base frequency of 3.6 GHz. Spec for spec, it may not seem much different than fastest mobile processor Intel sells, which is the Core i9-9880HK, offering the same maximum boost, the same core count, and SMT as well, but the 45-Watt mobile variant has a base frequency of just 2.4 Ghz, and with a TDP that is less than half, going to be able to maintain the highest frequencies for much less time.

To see how the Eurocom Sky X7C performs, we’ve put it through our laptop workloads. The comparison graphs include other gaming systems, some recent, and some a previous generation to compare performance against something you may be considering upgrading from.

First off is UL’s PCMark suite, which tests a range of different workloads and includes not only CPU and GPU intensive tasks, but also things like application loading times. In terms of productivity, the Eurocom Sky X7C is about the same as the best we’ve seen in the gaming laptop space, but in every other category, the performance delta is large. Overall the Sky X7C is 16.5% higher than the Core -9-9880H / RTX 2080 combination in the MSI GE75 Raider, and a whopping 31.8% faster in the Digital Content Creation sub-test. 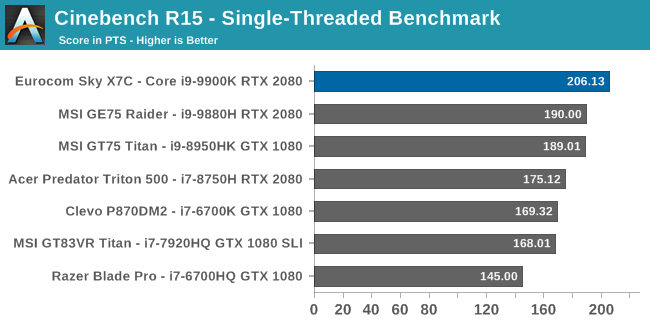 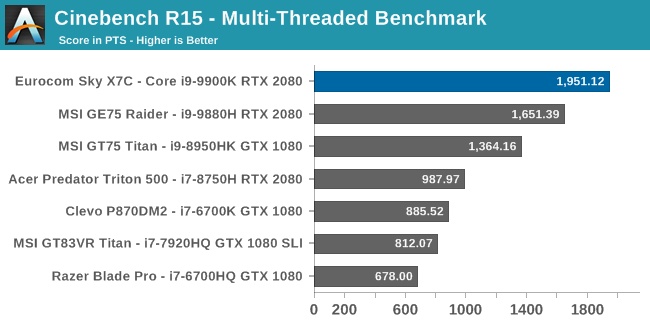 Maxon’s Cinebench test has been updated to version R20, which we are gathering data for and will start to use as our baseline once we have more devices tested, so for now we’ll stick with the R15 version which we have a much larger database of results from. One of the nicest parts of Cinebench is that it offers a single-threaded and multi-threaded workload, so you can take a look at how a single core performs, as well as how much performance you can get with more cores and threads on tap. In terms of single-threaded results, the Core i9-9900K unsurprisingly tops the cart, with a score that’s 8.5% higher than the Core i9-9880H in the MSI GE75 Raider, but with the extra TDP available, the gap is much wider when all of the cores are involved, coming in at 18.1% higher. Compared to the last true DTR we tested, which is the Clevo P870DM2 with a Core i7-6700K, the extra cores and threads along with the higher frequencies of the latest Core i9-9900K makes this processor score 120.3% higher. 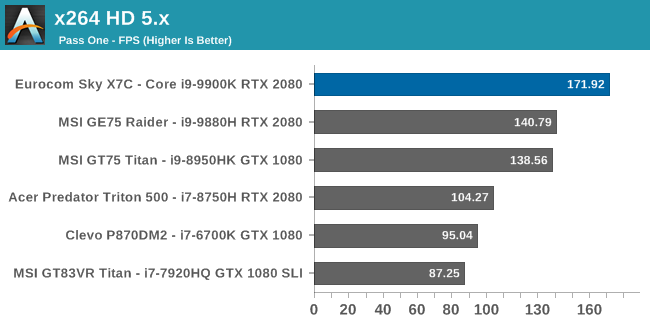 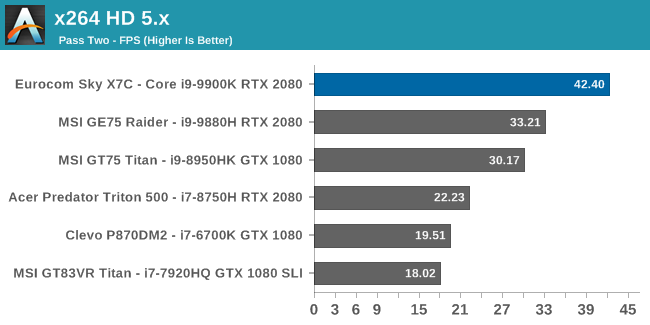 This test transcodes a video using the CPU, and loves extra cores and higher frequencies. The Core i9-9900K demolishes the competition in this result, offering 22% more performance in the first pass and 34% higher frames per second in the second pass than the next fastest laptop we’ve tested, and compared to the Core i7-6700K, which sat at the top of our charts for a long time when it was first tested, the performance increase is 81% and 117% respectively.

Web browsing is highly dependent on the underlying scripting engine, and as such we’ve standardized on Microsoft Edge for our web tests since Windows 10 launched in 2015. The problem with browsers is that they change, and Edge has been getting updates which impact its performance with every major Windows feature update, and Edge performance has regressed slightly in some respects. Coupled to this is that Microsoft is in the processes of converting from their own scripting and rendering engines to using the open-source Chromium project, and when that is released we’ll update our test suite with updated tests at the same time. 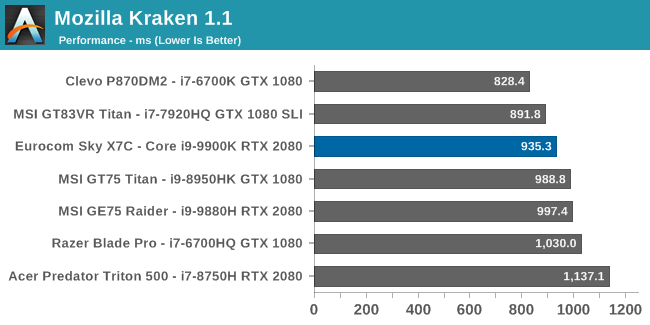 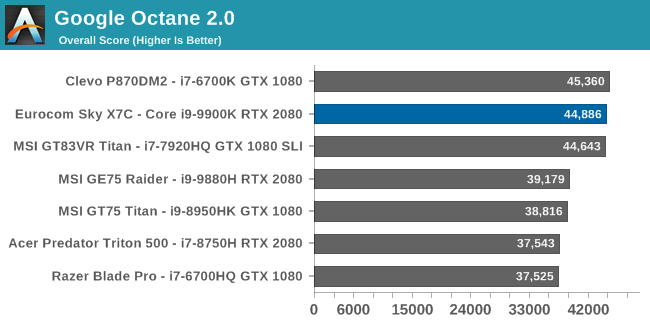 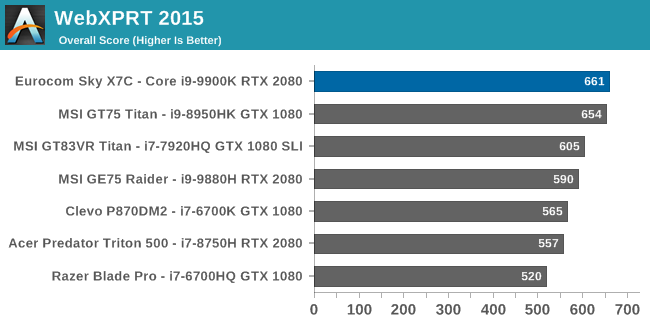 That performance regression can be clearly seen in the web results. The Core i9-9900K is up to 120% faster in some of our other CPU tests than the Core i7-6700K, but in our web results, only the WebXPRT results correctly demonstrate the much higher performance.

One of the nicest things about purchasing a custom ordered notebook from a company like Eurocom is that you can choose your storage from a wide range of options, unlike most laptops where you are at the mercy of whatever drive happened to be available at the manufacturer that day. Eurocom offers Intel’s Optane memory, or Samsung based NVMe drives with the 860 EVO, 970 EVO, and 970 Pro up to 2 TB in the case of the 970 EVO. You can add in a second NVMe drive, choose if you want it in RAID, and also add an additional two 2.5-inch SATA drives as well. 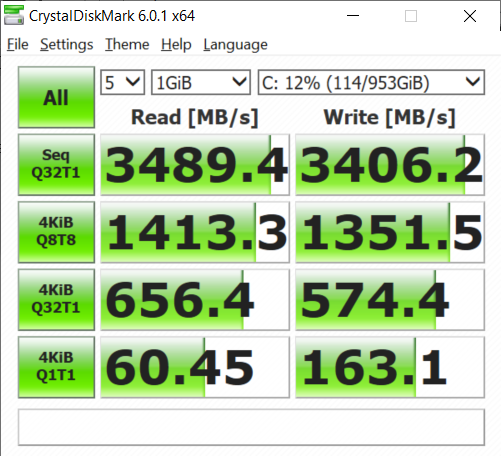 Our system has 2 x 500 GB NVMe in RAID 0 using Intel’s software RAID. Performance, as expected, is brisk. In terms of configurations, you can choose whether you want these drives in RAID when ordering, or just order a single, larger drive. Choice is a wonderful thing.