SPEC2017 and SPEC2006 is a series of standardized tests used to probe the overall performance between different systems, different architectures, different microarchitectures, and setups. The code has to be compiled, and then the results can be submitted to an online database for comparsion. It covers a range of integer and floating point workloads, and can be very optimized for each CPU, so it is important to check how the benchmarks are being compiled and run.

Our compiler flags are straightforward, with basic –Ofast and relevant ISA switches to allow for AVX2 instructions. Despite ICL supporting AVX-512, we have not currently implemented it, as it requires a much greater level of finesse with instruction packing. The best AVX-512 software uses hand-crafted intrinsics to provide the instructions, as per our 3PDM AVX-512 test later in the review.

For these comparisons, we will be picking out CPUs from across our dataset to provide context. Some of these might be higher power processors, it should be noted. 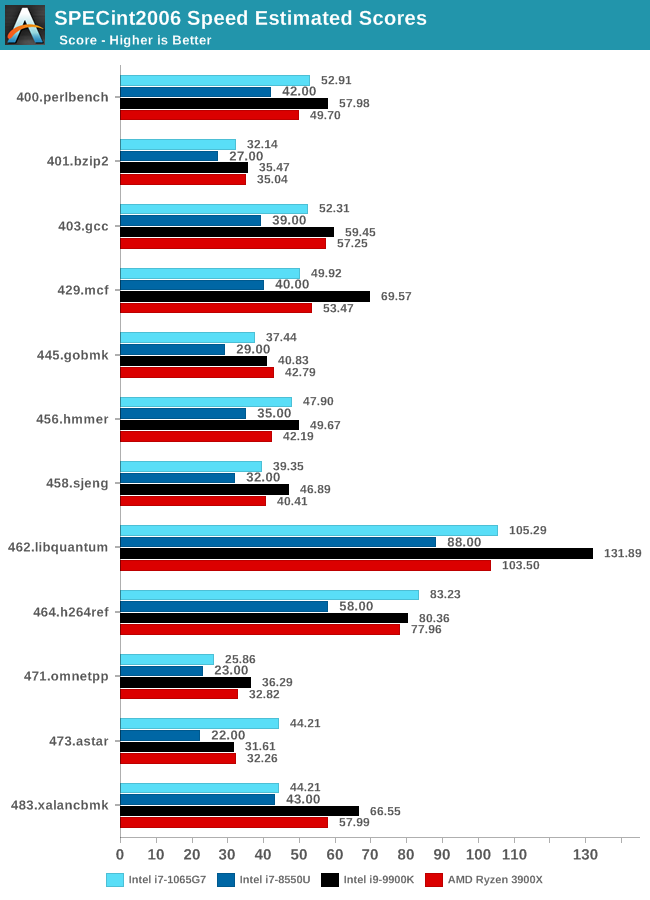 Amongst SPECint2006, the one benchmark that really stands out beyond all the rest is the 473.astar. Here the new Sunny Cove core is showcasing some exceptional IPC gains, nearly doubling the performance over the 8550U even though it’s clocked 100MHz lower. The benchmark is extremely branch misprediction sensitive, and the only conclusion we can get to rationalise this increase is that the new branch predictors on Sunny Cove are doing an outstanding job and represent a massive improvement over Skylake.

456.hmmer and 464.h264ref are very execution bound and have the highest actual instructions per clock metrics in this suite. Here it’s very possible that Sunny Cove’s vastly increased out-of-order window is able to extract a lot more ILP out of the program and thus gain significant increases in IPC. It’s impressive that the 3.9GHz core here manages to match and outpace the 9900K’s 5GHz Skylake core.

Other benchmarks here which are limited by other µarch characteristics have various increases depending on the workload. Sunny Cove doubled L2 cache should certainly help with workloads like 403.gcc and others. However because we’re also memory latency limited on this platform the increases aren’t quite as large as we’d expect from a desktop variant of ICL. 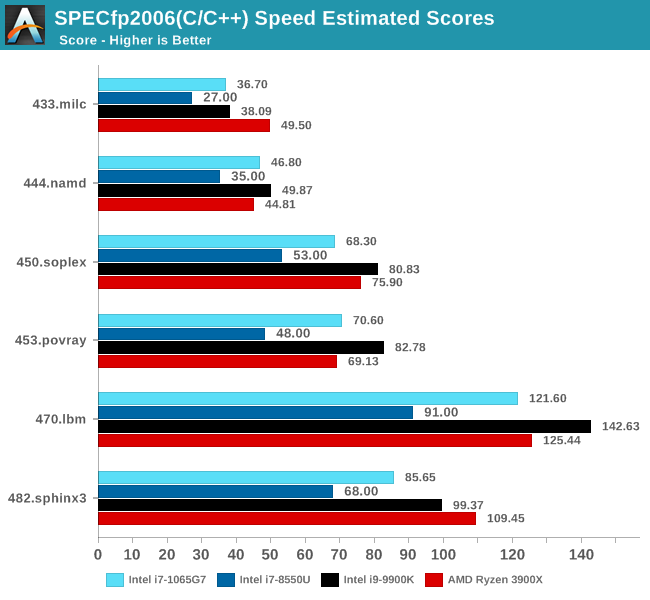 In SPECfp2006, Sunny Cove’s wider out-of-order window can again be seen in tests such as 453.povray as the core is posting some impressive gains over the 8550U at similar clocks. 470.lbm is also instruction window as well as data store heavy – the core’s doubled store bandwidth here certainly helps it. 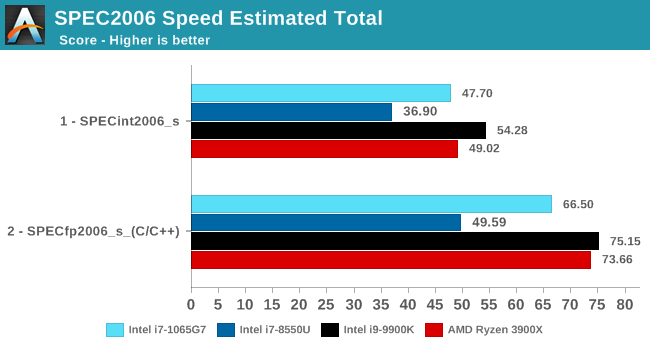 Overall in SPEC2006, the new i7-1065G7 beats a similarly clocked i7-8550U by a hefty 29% in the int suite and 34% in the fp suite. Of course this performance gap will be a lot smaller against 9th gen mobile H-parts at higher clocks, but these are also higher TDP products.

The 1065G7 comes quite close to the fastest desktop parts, however it’s likely it’ll need a desktop memory subsystem in order to catch up in total peak absolute performance. 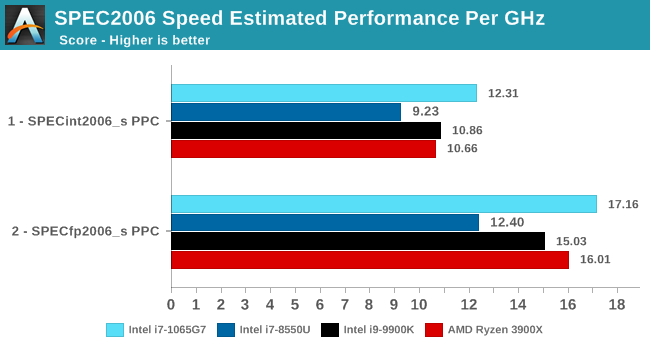 Against a 9900K, although apples and oranges, we’re seeing 13% and 14% IPC increases. These figures likely would be higher on an eventual desktop Sunny Cove part. 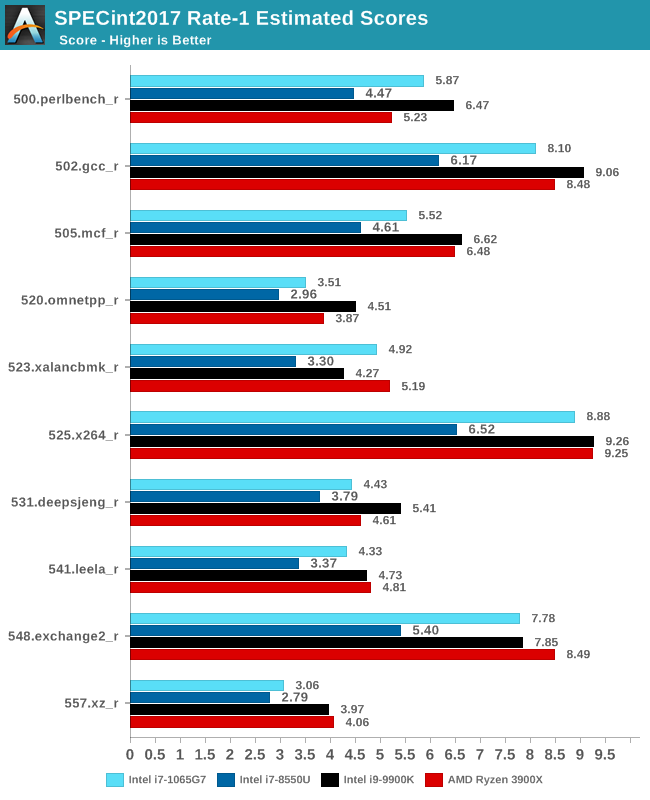 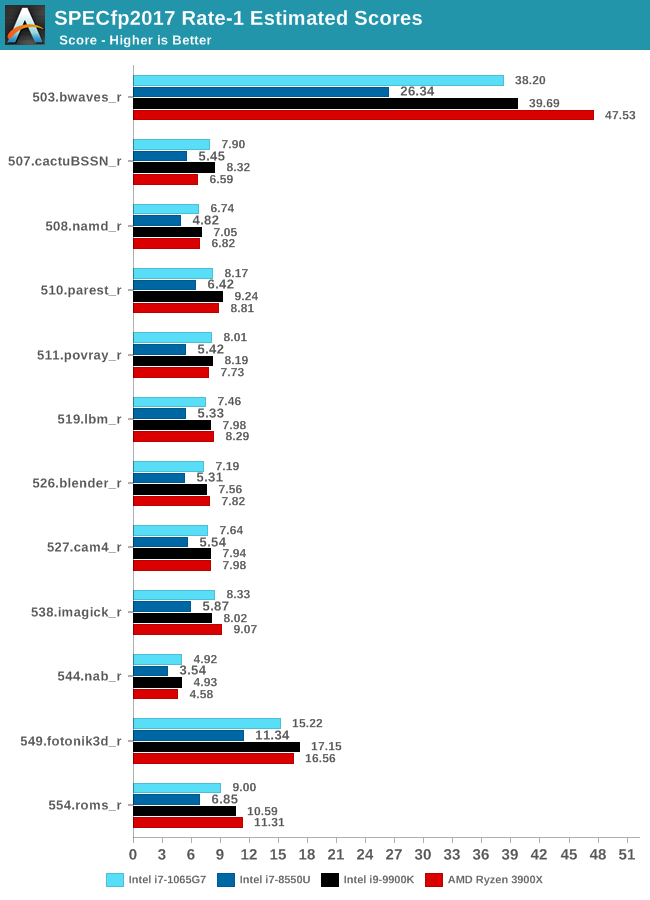 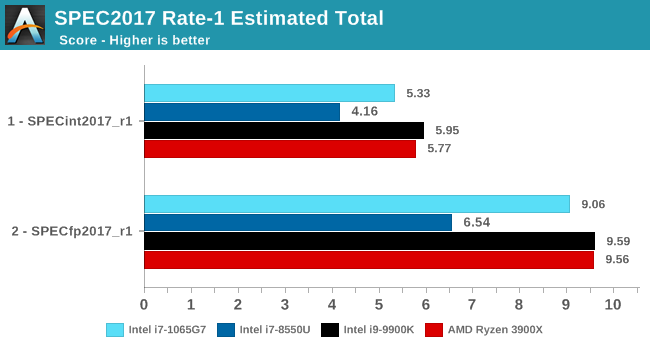 The SPEC2017 results look similar to the 2006 ones. Against the 8550U, we’re seeing grand performance uplifts, just shy of the best desktop processors. 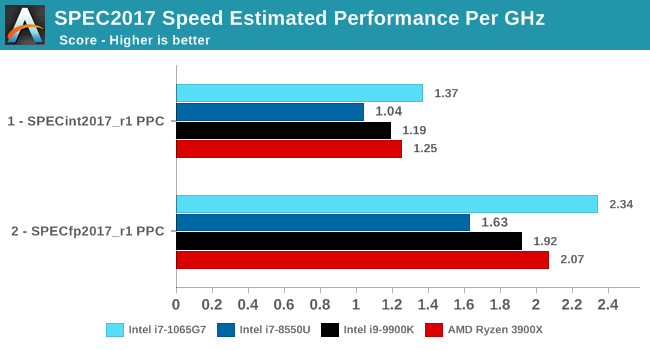 Here the IPC increase also look extremely solid. In the SPECin2017 suite the Ice Lake part achieves a 14% increase over the 9900K, however we also see a very impressive 21% increase in the fp suite.

Overall in the 2017 suite, we’re seeing a 19% increase in IPC over the 9900K, which roughly matches Intel’s advertised metric of 18% IPC increase.