It's no secret that the general consensus of overclocking with the Ryzen 3000 series has been so far disappointing. Whether it be the limitations of the new 7 nm silicon or the insane temperatures that these processors run at when overclocked, or even at stock settings with the stock cooler, to unlock the full potential of these chips, better cooling methods such as premium AIOs and custom water cooling is needed. 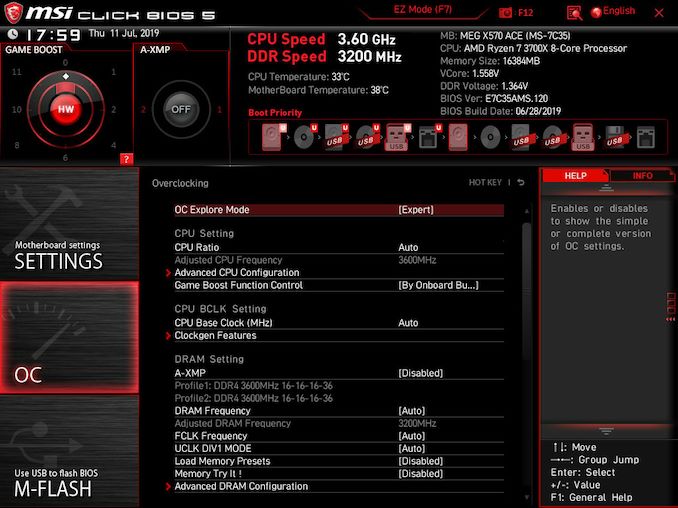 Overclocking with the MSI MEG X570 Ace motherboard, there are three ways this can be achieved; within the firmware, with the simple, albeit effective tools inside the MSI Dragon Center application or with the comprehensive AMD Ryzen Master overclocking software. For the purpose of this review, we used the MSI Click BIOS 5 firmware which is very intuitive to use, and although this model was quite laggy, it still worked without issues. While the most commonly changed settings to overclock the processor include the CPU ratio which increases the frequency in increments of 100 MHz and the CPU VCore which increases the voltage pumped into the processor which not only generates extra heat but also increases power consumption. 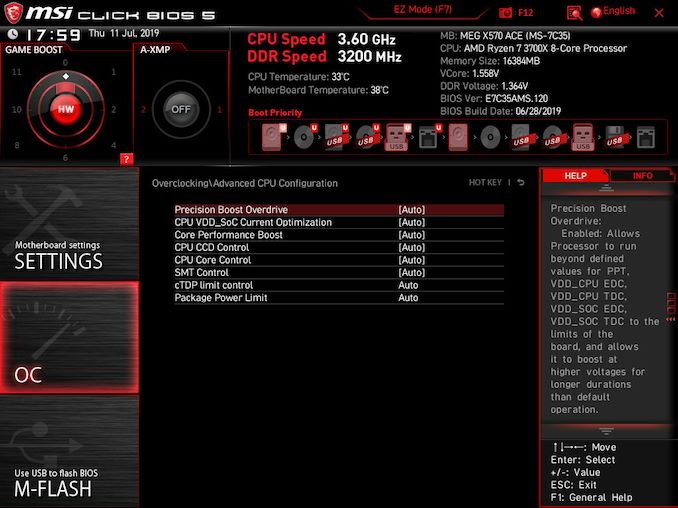 In addition to the boost feature of the Ryzen 3000 processors, another AMD specific feature is called Precision Boost Overdrive or PBO. The three main variables that PBO works from including package power tracking (PPT), thermal design current (TDC), and the electrical design current (EDC). All three of these can be set within the firmware under the advanced section of the Precision Boost Overdrive menu, although MSI has included four different PBO profiles for users to select from. In addition to these are seven different Game Boost CPU overclocking profiles with each profile ranging from 4.0 GHz all cores up to 4.3 GHz all cores; these go up in increments of 50 MHz.

For manual overclocks, based on the information gathered from the previous testing, starts off at a nominal voltage and CPU multiplier, and the multiplier is increased until the stability tests are failed. The CPU voltage is increased gradually until the stability tests are passed, and the process repeated until the motherboard reduces the multiplier automatically (due to safety protocol) or the CPU temperature reaches a stupidly high level (105ºC+). Our test bed is not in a case, which should push overclocks higher with fresher (cooler) air. 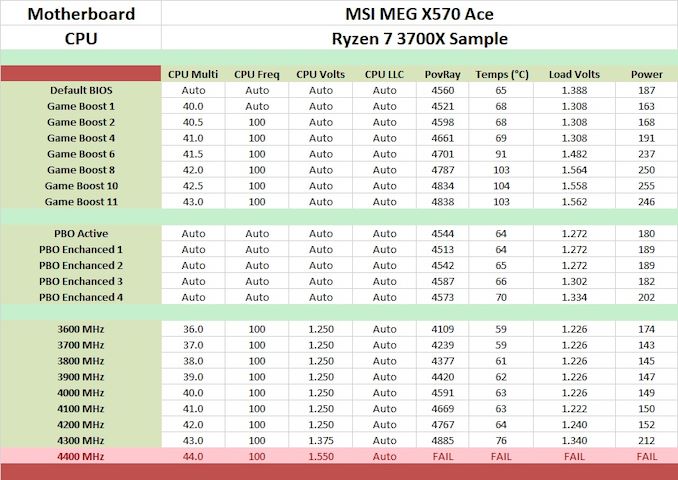 The 12+2 power delivery of the MSI MEG X570 Ace is one of the best we have seen from MSI in recent years and as a result, allowed us to manually overclock our Ryzen 7 3700X sample to 4.3 GHz with a set voltage of 1.375 V. Using the default load line calibration setting, this resulted in a load CPU VCore of 1.340 V which gives us a VDroop of 0.035 V in total. Of course, this can be alleviated by using a more aggressive LLC profile, but for the purposes of our testing, we leave this setting at auto. More voltage pumped into the CPU not only results in higher operating temperatures, but this also increases the overall power consumption.

Testing out each of MSI's seven Game Boost profiles did yield some interesting findings. First of all, each profile overvolted our Ryzen 3700X by a massive margin when you factor in what we achieved by using manual settings. Secondly, the three highest Game Boost profiles pumped insane amounts of CPU VCore in which in turn, made our 240mm AIO closed-loop cooler go into overdrive with temperatures in the triple digits. Outside of extreme overclocking, no Ryzen 3000 processor should be subjected to voltages of 1.562 V for a 4.3 GHz overclock on ambient cooling. Performance however was consistently higher with each of the profiles in our POV-Ray benchmark and by default with the Game Boost profiles, thermal throttling is disabled meaning that there is a trade-off between heat and performance. We also tested with PBO and found that performance was actually worse than the default settings, with MSI's four PBO profiles not really having much of an effect on performance; this leads us to believe for the most part, that PBO on Ryzen 3000 could do with a rework to make it more effective.