The SLC cache behavior of the Kingston KC2000 is quite similar to the other SM2262EN-based drive, the ADATA SX8200 Pro. Both have large caches of a little over 150GB. The performance levels differ slightly: the KC2000's 96L BiCS can handle only about 2.2GB/s of writes to its SLC cache while the ADATA's Micron 64L TLC in SLC mode is just shy of 3GB/s. Once the caches are filled and the drives start writing direct to TLC, the 96L BiCS4 TLC is a bit faster than the Micron 64L TLC. Performance drops again when the TLC starts to fill up and space has to be reclaimed from the SLC cache.

The average write speed from the KC2000 for the last 16GB and the overall average for the entire drive fill are both subpar for a high-end drive, but faster than the ADATA SX8200 Pro–which was tied for the fastest SLC cache at the beginning of the test.

Note: We recently upgraded our power measurement equipment and switched to measuring idle power on our Coffee Lake desktop, our first SSD testbed to have fully-functional PCIe power management. The below measurements are all new, and are not a perfect match for the older measurements in our previous reviews and the Bench database.

The active idle power consumption of the KC2000 is a bit on the high side even compared to other SM2262EN drives, but when the idle power states are engaged it is excellent at saving power, even in the desktop configuration that does not enable all of the PCIe power management features supported by the drive. 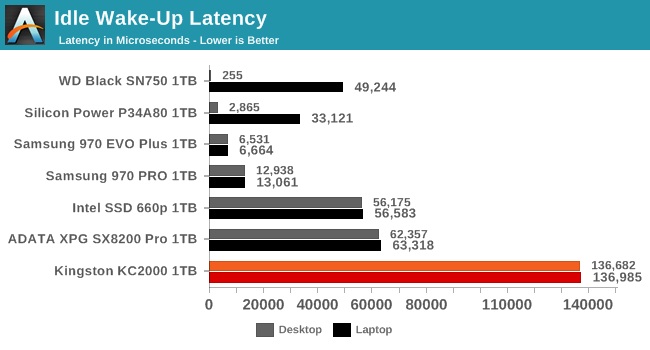 The downside to the excellent idle power savings possible with the KC2000 is that it takes a surprisingly long time to wake up, at about 136ms in both desktop and laptop configurations. This is more than twice as long as the already sluggish wake-up times exhibited by previous SM2262EN drives, and many times higher than what the drive's own firmware indicates.