The MPG X570 Gaming Plus is MSI's entry-level gaming model and It's equipped with a modest feature set which includes with one PCIe 4.0 x4 M.2 slots, and two-full length PCIe 4.0 slots with support for two-way AMD CrossFire multi-graphics card setups.

Firstly the aesthetic is based on a traditionally recognized red and black theme; this design extends from the heatsinks onto the PCB. The chipset heatsink cooling the X570 chip includes a cooling fan for optimal performance, while the power delivery heatsinks are separated from each other to provide cooling to the CPU VCore. There are 8-pin and 4-pin 12 V ATX CPU power inputs to delivery power to the processor, while the power delivery is running at 8+2 design with an International Rectifier IR35201 PWM controller. 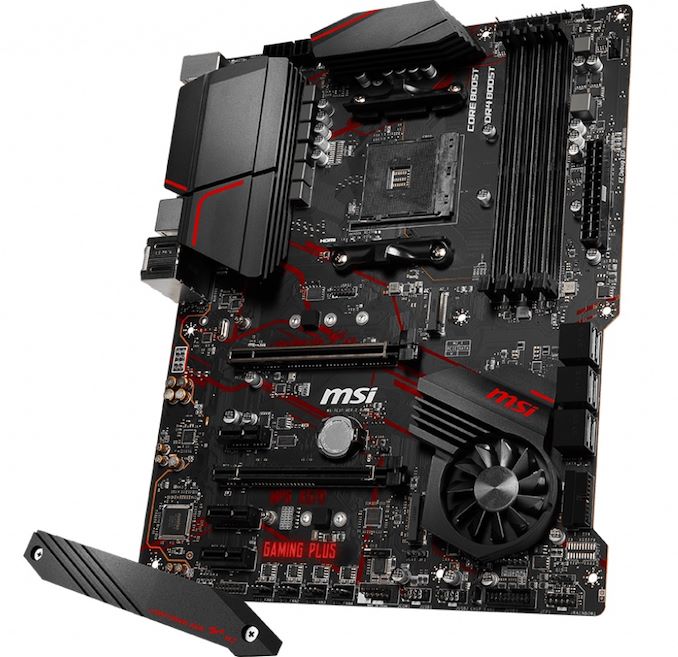 Located in the top right-hand corner of the board are four memory slots which support DDR4-4400, with up to a maximum capacity of up to 128 GB. Moving down the PCB is two full-length PCIe 4.0 slots that operate at x16, and x16/x4, with an additional three PCIe 4.0 x1 slots. There are two PCIe 4.0 x4 M.2 slots, with one of the slots coming with a heatsink; there are also six SATA ports present.

The MSI MPG X570 Gaming Plus is the entry-level model to the X570 chipset from its product stack which also has a clear gaming look about it. With a red and black design, it's a throwback to MSI of more recent times, but the board has no integrated RGB which users may find slightly disappointing. The power delivery although adequate, probably isn't the best around for overclocking aRyzen 3000 processor to its limits, but with an MSRP of $169, it's horses for courses.