Moving down the product stack and we come to the MSI MPG X570 Gaming Edge WIFI which sits below the X570 Gaming Pro Carbon WIFI with much of the same features, but with a lower-cost controller set. The main features include one PCIe 4.0 x4 M.2 slot, six SATA ports. and an 802.11ac wireless interface. Up to DDR4-4400 is also supported with a total capacity of up to 128 GB across the four available memory slots. 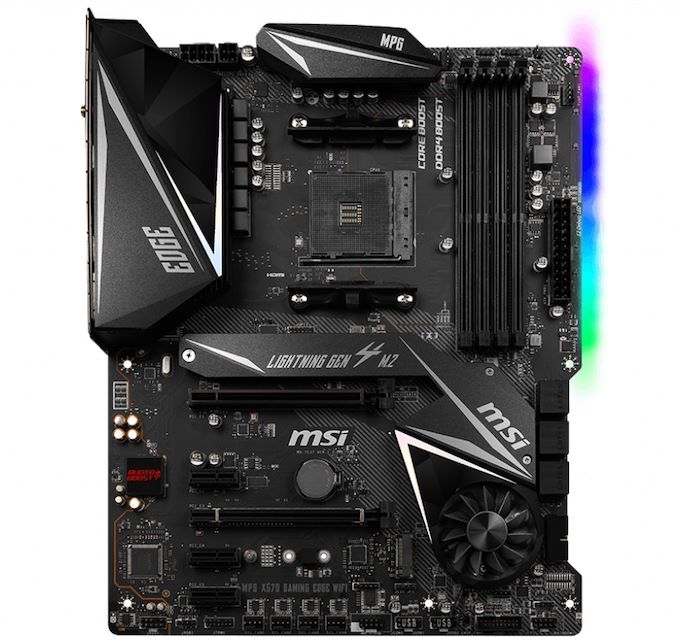 The MPG X570 Gaming Edge WIFI offers a more modest variety of specifications which bridges the gap between the X570 Gaming Pro Carbon WIFI ($259) and the more cost-effective X570 Gaming Plus ($169). Its design is similar to the MPG X570 Gaming Pro Carbon WIFI in that it has a black PCB, but without the carbon inspired decorations on the heatsinks. There are two PCIe 4.0 x4 slots with the top slot including a heatsink, while the bottom slot doesn't, and six SATA ports with support for RAID 0, 1, and 10 arrays. A total of two full-length PCIe 4.0 slots with which run at x16, and x8/x8 with support for two-way AMD CrossFire multi-graphics card setups, and four DDR4 memory slots that support up to DDR4-4400. The two full-length PCIe 4.0 slots operate at x16, and x16/x4 which means NVIDIA SLI isn't supported, but users can utilize two-way AMD CrossFire setups.

On the rear panel is a pre-installed rear panel I/O shield with five 3.5 mm audio jacks and S/PDIF optical output powered by a Realtek ALC1220 HD audio codec. For general connectivity, there is three USB 3.1 G2 Type-A, one USB 3.1 G2 Type-C, two USB 3.1 Type-A, and two USB 2.0 ports. Also present is an HDMI video output for use with compatible AMD Ryzen APUs, as well as a BIOS flashback button, and a PS/2 combo port. Networking wise, there are two antenna ports for the included Intel 3168 802.11ac Wi-Fi interface which is capable of speeds of up to 433 Mbps, while the single Ethernet port is controlled by a Realtek RTL811H Gigabit NIC.

The MSI MPG X570 Gaming Edge WIFI represents a more modest offering in the line-up with an MSRP of $209 which is down to a couple of component choices such as the cheaper Realtek Gigabit NIC instead of the usual Intel variant, as well as no support for NVIDIA SLI configurations.