As it currently stands, the Biostar X570 Racing GT8 motherboard is the only model from its product stack at the launch of the X570 chipset. Upon speaking to Biostar at Computex, they did go on to say that they will release a mini-ITX model, most likely named the Racing X570GTN; we actually reviewed the previous Biostar X370GTN, and X470GTN AM4 mini-ITX motherboards. The Biostar X570 Racing GT8 has a black and grey PCB, with grey and silver heatsinks and is inspired by motor racing.

The Biostar X570 Racing GT8 ATX motherboard has three full-length PCIe 4.0 slots, with two fed by the CPU supporting x16, x8/x8, and x8/x8/x4 configurations. The bottom full-length slot is fed directly from the X570 chipset and is locked down at x4. There are also three PCIe 4.0 x1 slots available for use. On the black and grey contrasting PCB, with grey heatsinks, Biostar is using a 12-phase power delivery with an 8-pin and 4-pin pairing of 12 V ATX CPU power connectors. In the top-right hand corner of the board is four memory slots with support for up to DDR4-4000, (confirm capacity). On the storage front is three PCIe 4.0 x4 M.2 slots with six SATA ports capable of supporting RAID 0, 1, and 10 arrays. 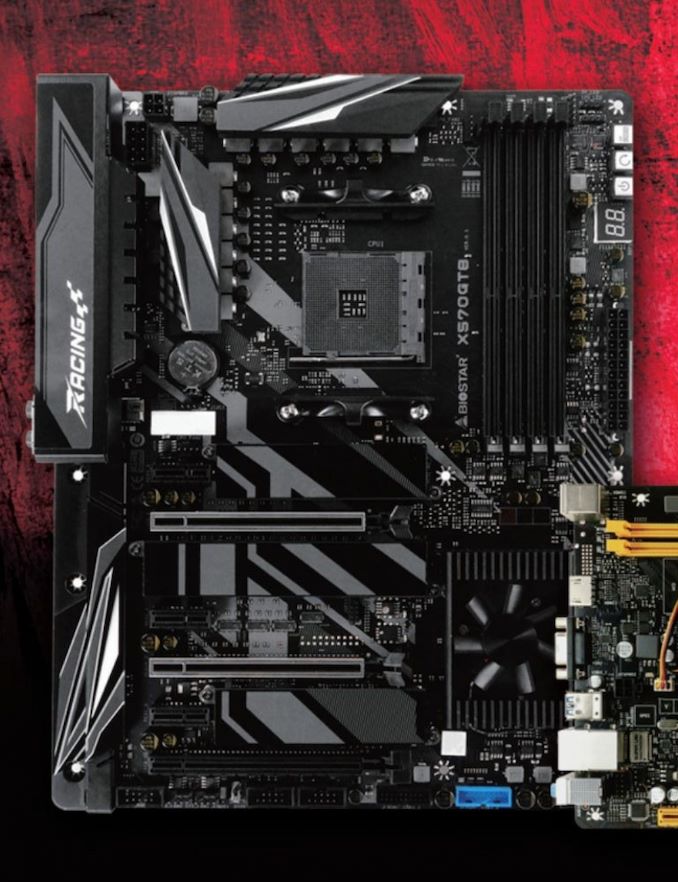 The Biostar X570 Racing GT8 has no MSRP as of yet, but we have reached out to Biostar for this information. Its X570 Racing GT8 looks to amalgamate a sporty racing-inspired design into an attractive ATX gaming model, and with a mixed contrast of black, grey and silver, it's not just the companies flagship X570 model, but as of launch day, it's the only model available from Biostar.