The Samsung 860 QVO is not the first consumer QLC SSD we've tested, but in many ways it better conforms to our expectations for QLC than the Intel 660p and Crucial P1 did. Those NVMe SSDs don't do much to satisfy demand for a cheap entry-level drive or for a high-capacity drive, the two applications where QLC NAND seems most useful. QLC has been pitched to us several times as a HDD replacement, rather than a performance product. It was a bit of a surprise to see QLC first arrive in NVMe SSDs. By contrast, the 860 QVO is an extremely predictable product with no surprises whatsoever in its design. Samsung is building on a tried and true formula, just adapting the 860 EVO to work with QLC NAND.

QLC NAND is fundamentally about sacrificing quality for quantity. The viability of QLC SSDs rests on the assumption that existing drives are more than fast enough, which is something that's certainly true of many Samsung SSDs. The Samsung 860 QVO is not as fast or as power efficient as the 860 EVO, but it doesn't need to be. Samsung has tended to stay out of the true entry-level segment of the SSD market, and there's been room for something like the QVO in their product lineup for much longer than they've had the technology to make a QLC SSD. 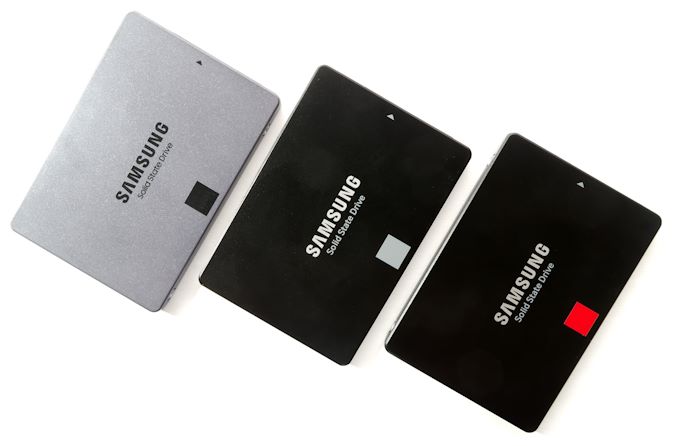 As with the other two QLC drives we've tested, the important takeaway is that the use of QLC NAND does not have a revolutionary impact on the final product. The 860 QVO is still suitable for general-purpose consumer storage duty. It is slower than the 860 EVO, but the QVO is far from the slowest SATA SSD we've tested. Thanks to a combination of SLC caching and the SATA link bottleneck, the 860 QVO's behavior is often indistinguishable from other SATA SSDs. Based on benchmark results alone, it would be difficult to conclusively identify the QVO as a QLC-based drive, rather than just a relatively slow TLC drive. The true giveaways are the sustained write performance after the SLC cache is full, and the amount of idle time required for the drive to recover after using up its write cache. Neither of those scenarios are a common occurrence during typical consumer usage.

From a technological perspective, QLC NAND seems to be ready to make an impact on the consumer storage market. It's fast enough to still be a huge step up from hard drives, and the write endurance is still adequate. Samsung should be commended for only offering the 860 QVO in 1TB and larger capacities. The competitors that use QLC in smaller drives will be facing downsides that are much harder to overlook. Even as they introduce a lower tier, Samsung is keeping their products out of the gutter.

With the Intel and Micron QLC drives using NVMe to the 860 QVO's SATA, there's a lot to get in the way of comparing Samsung's QLC to Intel/Micron QLC. From our testing so far, there doesn't seem to be a clear winner. Tests where the 860 QVO hits the limits of the SATA interface aren't helpful. Among the other tests, the Intel/Micron QLC seems to generally be a bit faster, but some of that is still due to the NVMe interface. Power efficiency seems to be broadly similar between the two QLC designs.

The downsides of QLC NAND—be they mild or severe—are all accepted in exchange for the promise of affordability. Other things being equal, QLC NAND should ideally be 25% cheaper than TLC NAND. There are several reasons why this is an unobtainable goal at this point, but even accounting for those, the few QLC SSDs we have so far are all failing to deliver the improved affordability. NAND flash memory prices are dropping across the board, so now is not the best time to try to use new technology to get ahead on pricing. The 860 QVO looks likely to suffer the same fate that affects many entry-level DRAMless SATA SSDs: the higher-volume mainstream SSDs are on the leading edge of the price drops, and that means they often close the gap with entry-level SSDs.

Samsung's MSRPs for the 860 QVO reflect that. The current street prices for the 860 EVO are lower than the 860 QVO for two out of three capacities, and that's comparing against one of the best SATA SSDs out there. There are plenty of mainstream drives with slightly lower performance. The exception is in the 4TB segment where Samsung is unopposed. The 4TB segment is only just now starting to look viable, but at $600 for the 4TB QVO it is still well out of a normal consumer price range. It might be worth revisiting the 860 QVO in a few months on pricing to see where it stands.

Samsung plans for the 860 QVO to be available for purchase starting December 16. By then, the holiday sale pricing and related shortages should have settled down, and Samsung will have had the chance to re-consider their pricing. In the meantime, the 860 EVO remains the obviously superior choice.