Conclusion - More of the same

While we never reviewed the Note9, and this piece isn’t meant to be a full review, we can still put out a few sentences about the phone as a whole. Here Samsung is able to build a fantastic device, and there’s very little to criticize the Note9 on. The screen is large, bright, sharp and accurate. The camera is leading edge, even though by now there are devices out in the market which manage to compete quite well with Samsung’s best, especially in low light. Samsung makes no compromises in features, and the Note9 has everything: a 3.5mm headphone jack, wireless charging, IP68 rating, and naturally its key feature, the S-Pen.

While on the outside, the Note9 impresses in all aspects regardless where you purchase it from, on the inside things are again quite different as we again see the usage of two very contrasting SoCs.

I think the following picture sums things up quite well: 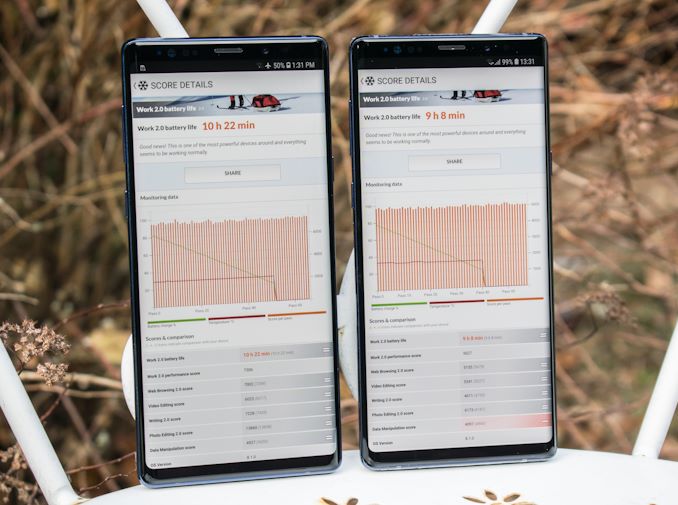 Like on the Galaxy S9, the Note9’s Exynos variant is just an overall inferior device. Battery life was one aspect that the Exynos S9s fared quite terribly in, and this time around Samsung did manage to somewhat improve the difference to the Snapdragon 845. Unfortunately it’s not enough as the Snapdragon variant still leads.

While the battery disadvantage has somewhat decreased, Samsung has done nothing to improve the performance of the chipset. Here the Snapdragon 845’s software is still leagues ahead of what the Exynos is able to offer, with the latter still not being able to differentiate itself much from the Exynos 8895 in system performance. The benchmark differences are very much also representative of the real-world performance difference of both variants.

In our recent quarterly smartphone guide, I’ve recommended the Snapdragon Note9 alongside the S9s as among the best Android devices you can buy this holiday. The Exynos Note9 in my opinion again doesn’t really make the cut as you’re paying flagship prices for a device that offers less battery life and performance not much better than last year’s phones.

Having finally gotten these results out, I hope to finally turn the page on the topic, as I’m feeling like a broken record and the coverage is akin keeping on beating a dead horse. The situation is eerily similar to the Galaxy S4 SoC situation from a few years back, only that I feel the differences this year were much worse. Huawei’s vertical integration here is pushing the company to make great strides with every generation, and Apple’s silicon is now so well ahead that we’re not really expecting Android vendors to catch up any time soon.

Samsung as a whole needs to decide where they want to go forward with this dual-sourcing strategy as I currently see it as a lose-lose situation for both the smartphone division as well as their chipset business. Hopefully the Exynos 9820 manages to be competitive chipset and S.LSI manages to finally get serious about execution as a SoC vendor, as otherwise the next few years are just going to a rough ride.