The performance difference between the Snapdragon and Exynos S9’s was among by biggest complaints about the latter variant. Here there’s a stark difference in software quality between what Qualcomm and S.LSI were able to deliver. Let’s see if the Note9 improves this in any way: 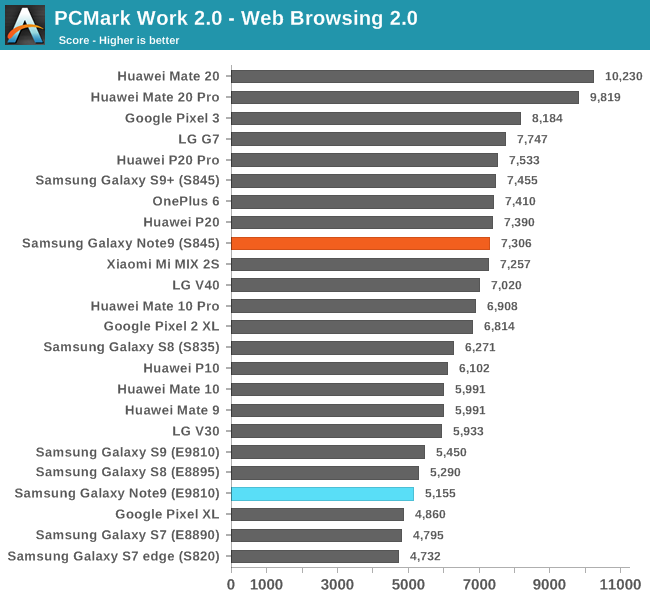 The Exynos Note9 here unfortunately doesn’t really improve on the S9, and even shows a slight regression. 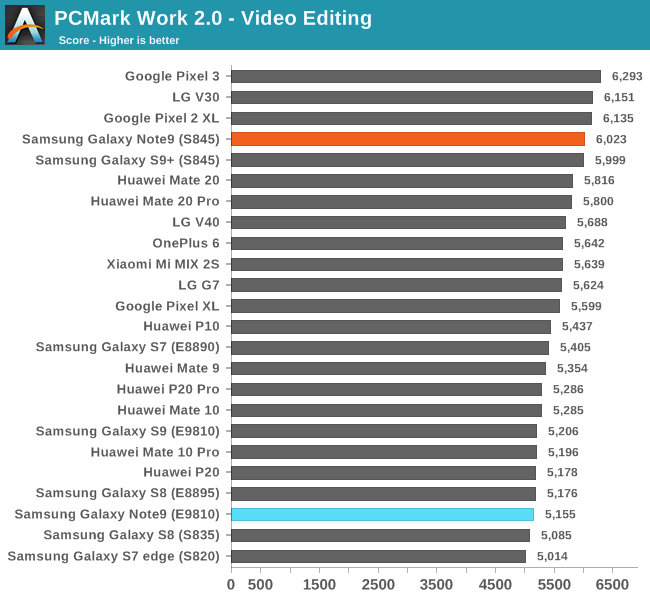 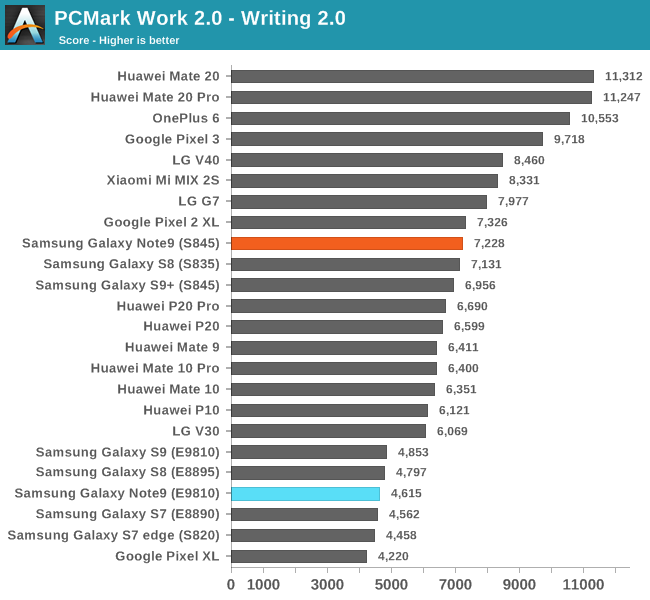 The writing test of PCMark is in my opinion one of the most important tests in our suite, as its results pretty much directly correspond to the actual perceived speed of a device in a lot of every-day scenarios. The test makes heavy usage of common Android APIs to achieve representative usage of common tasks such as text editing and PDF rendering.

The Exynos Note9 here seems again to showcase a slight performance degradation over the S9, but it’s all within margins of error. 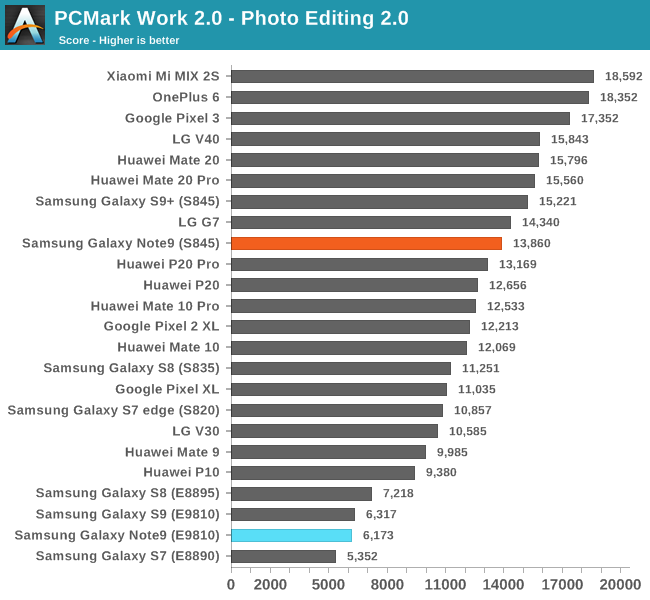 The photo editing test consists of small bursts of workloads making use of Android’s image processing APIs. This test’s key feature is that it is very sensitive to the responsiveness of the system, in other words, how fast the SoC can ramp up its performance. 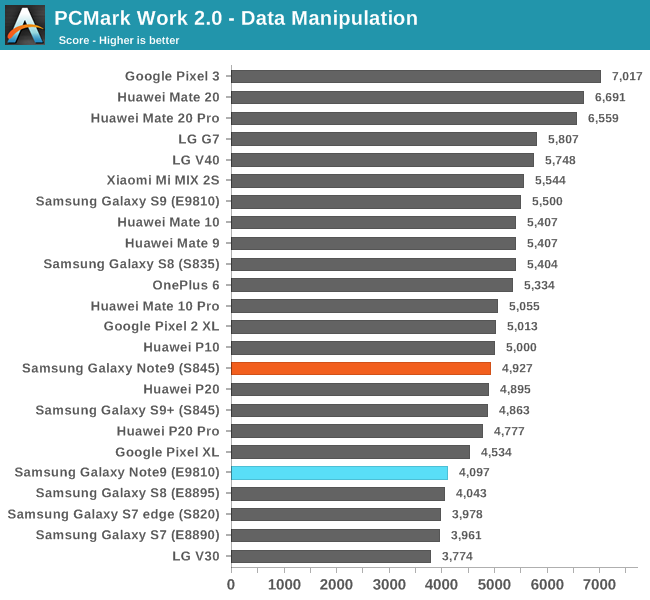 Finally, the data manipulation test is the most telling one in terms of the differences that Samsung has made on the Exynos model: Here the Note9 performs significantly worse than the Exynos Galaxy S9, coming in with a 34% lower score.

The data manipulation test is characteristic in the way it works in that it has a significant portion of heavy single-threaded processing. What’s actually happening on the Exynos Note9 here is that Samsung is disallowing the SoC to boost to its single-core 2.7GHz mode as often as the S9 originally did, a regression that I also encountered with my custom kernels on the S9. 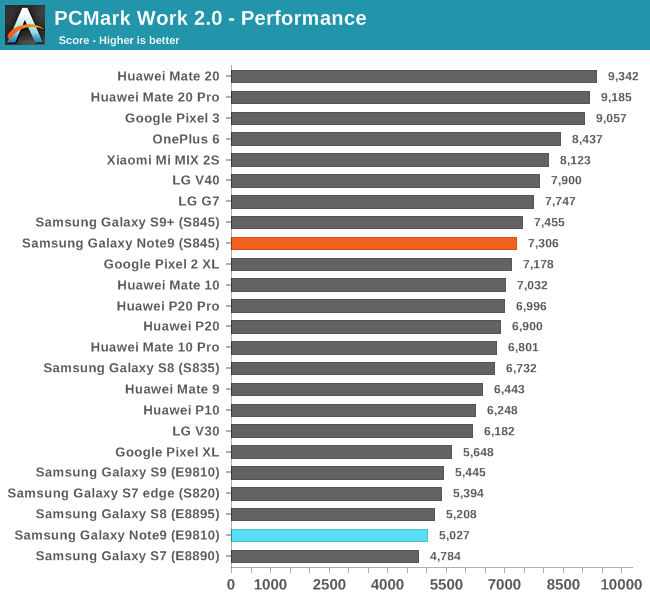 In terms of overall result, the Exynos Note9 falls in the ranks by several spots, now scoring even lower than last year’s Exynos 8895 S8, a not too fantastic showing.

The most evident result of the more prohibitive single-core booster is in the web browsing tests: 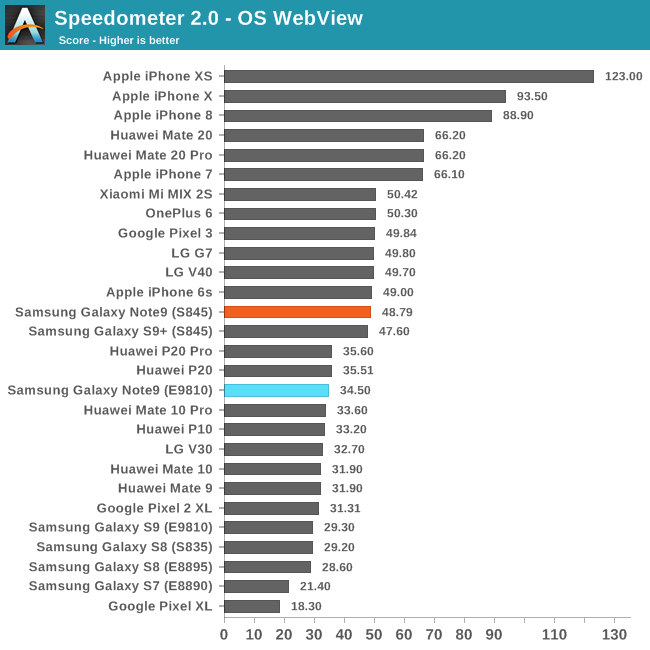 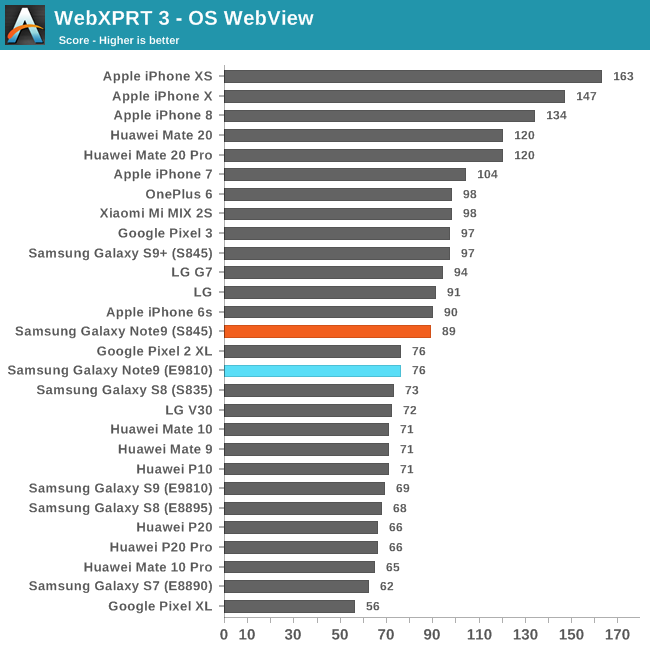 Both in Speedometer 2.0 and WebXPRT 3, the Exynos Note9 performs better than the S9 with its initial firmware. The result here is directly related to the decreased result of the data manipulation score in PCMark. As explained in our scheduler pieces, one of the reasons the Exynos S9 fared so badly in these tests is the core booster mechanism; boosting to 2.7GHz on a single big core while relegating all other threads to the small cores results in worse performance than simply if there were simply more big cores available, but at a lower clock speed. The latter scenario is what happens on the Note9 as why we see a 10% improvement over the S9.

The most low-effort band-aid

Overall, the actual changes in behaviour of the Exynos chipset in the Note9 represent nothing more than the most low effort changes possible. What Samsung has done here is just slightly change the booster mechanism in order make workloads more difficult to trigger the single-core 2.7GHz boost mode. For performance this is both beneficial as well as a regression, depending on workloads. What is more important is that the severe battery life impact of the 2.7GHz frequency is more significantly reduced through these changes, even though efficiency still doesn't match the Snapdragon 845 variant.

While performance has increased in the web benchmarks by around 10% - the overall result is still abysmal. Comparing the speed of the Snapdragon Note9 to the Exynos Note9 in just everyday usage, the Exynos still pretty much falls behind in every aspect. Samsung had a chance to improve things more drastically with the release of the new phone, but to me it just looks like another disappointment.