The Pixel 3’s screen is an extremely important aspect of the phone, not just because it’s the centre-piece of a device, but also because Google’s choice of panel manufacturer. Last year’s Pixel 2 XL suffered from a compromising display made by LG, which in particular had very large issues regarding gamma as well as black clipping at low brightness levels. 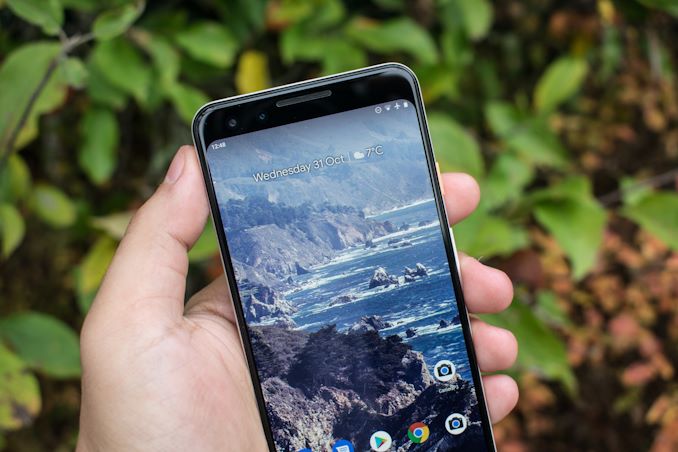 This year, Google opted to swap display suppliers around, with the small Pixel 3 now featuring an LG panel while the bigger Pixel 3 XL uses a Samsung unit. Again unfortunately we don’t have the 3 XL at hand, but we can investigate the Pixel 3’s LG panel and make comparisons on the issue points that plagued last year’s 2 XL. 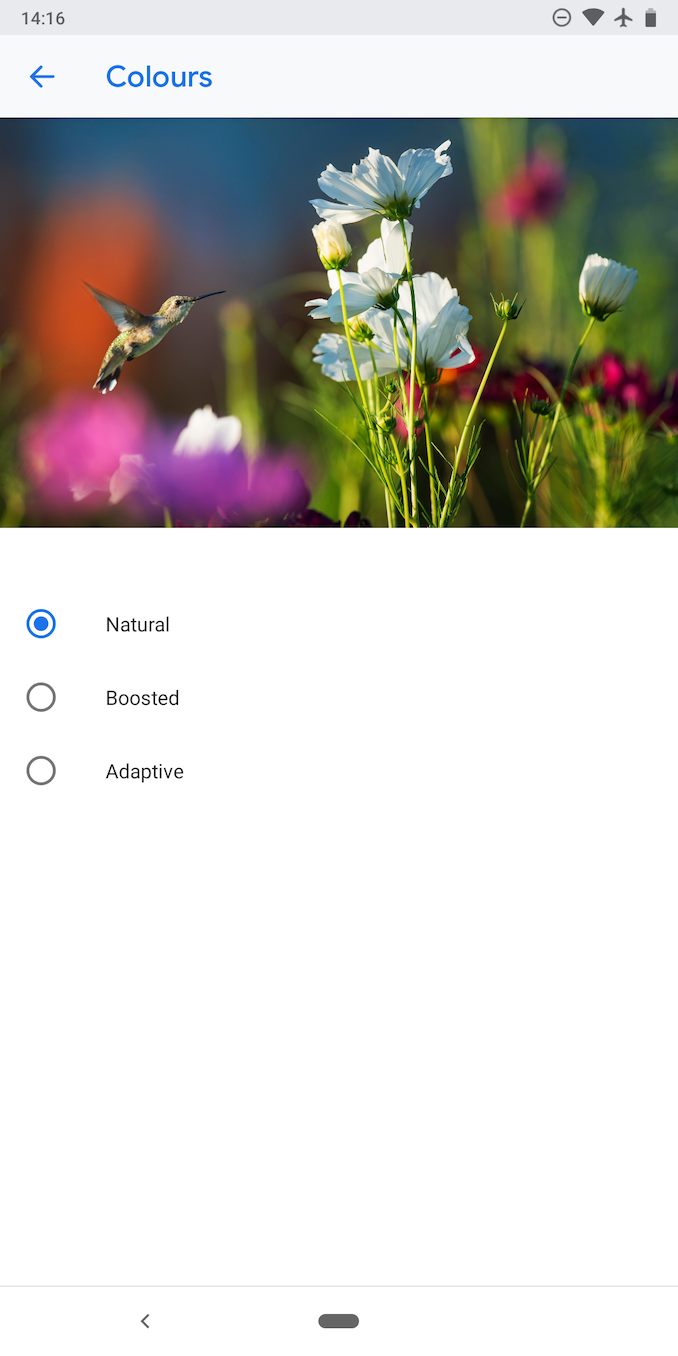 One thing of note that is a first for Google is the introduction of different display colour modes. This was introduced in Android P / 9 and was backported to last year’s Pixel 2. Google now offers a “Natural” mode which represents accurate sRGB and Display P3 D65 targets, a “Boosted” mode which increases the colour saturations, as well as an “Adaptive” mode which is a bit of a mess but shouldn’t be of any concern to people who don’t care too much about colour accuracy.

Starting off with the greyscale measurements, I decided to switch over to full scale 256 level measurements to better showcase some of the characteristics of the panels, we’ll get back to this at the end of this page.

In “Natural mode”, the Pixel 3 is very accurate and manages to showcase a DeltaE2000 of 1.36, along with an average colour temperature of 6576K, which is very near the target D65 illuminant.

The phone has a maximum brightness of 407 nits – which is average of an OLED, as recent generation Apple and Samsung devices reach levels above 600nits. Google isn’t employing any auto-brightness boost mode, so sunlight legibility might be less than that of other devices, however I wasn’t able to test this directly in the cloudy weather.

Gamma came in at 2.18 – however looking at the curve it’s notable that for most levels it’s at around 2.3, and the average is brought down by being too bright in the last 5% of levels. 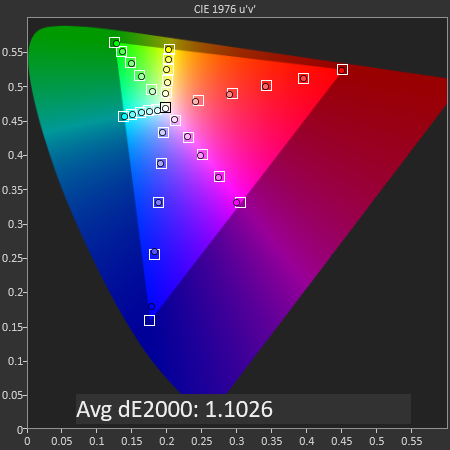 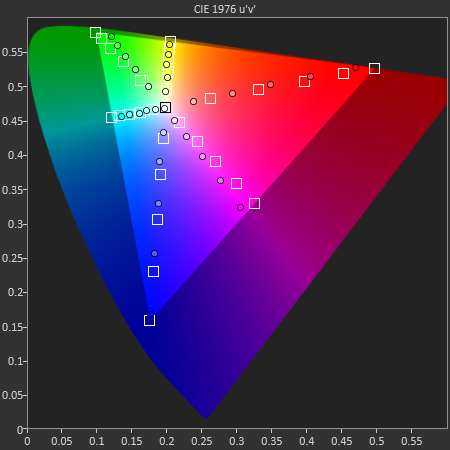 When in “Natural” mode, all non-colour managed content targets the sRGB colour-space. Here the Pixel 3’s screen is very accurate with a dE2000 of 1.1, among the best in terms of colour accuracy.

Selecting the “Boosted” mode linearly increases the saturations within the sRGB space – the resulting gamut doesn’t adhere to any standard. The adaptive mode is a complete mess in terms of colour gamut as well as targeting a high gamma of 2.5 – we’ll get back to that into a bit. 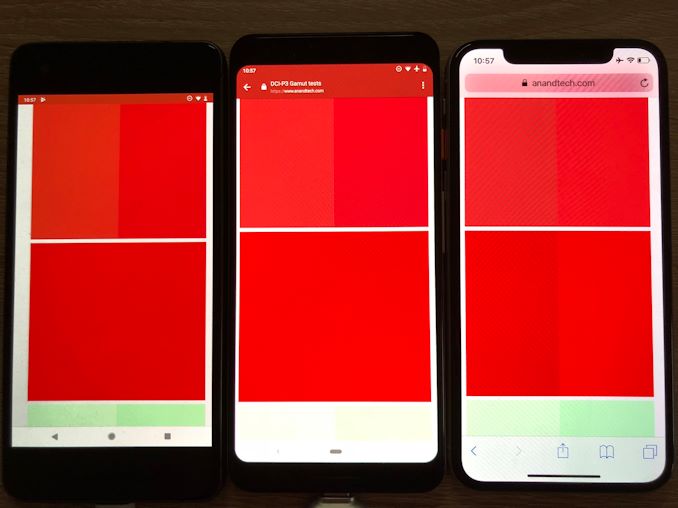 Google introduced OS level colour management support in Android 8, however the implementation on the Pixel 2 wasn’t finalised and there wasn’t any application support as of last year. With the Pixel 3 I had hoped that Google would progress on this, however to my great disappointment I didn’t find a single out-of-the box application which would support wide-gamut content.

To demonstrate the issue, you see the Pixel 2, Pixel 3 and an iPhone XS showcasing sRGB and Display P3 images alongside each other in the above photo. By default on Chrome, both sRGB and P3 images are equal, while the XS correctly showcases the higher saturation of the full-level red of the P3 image. 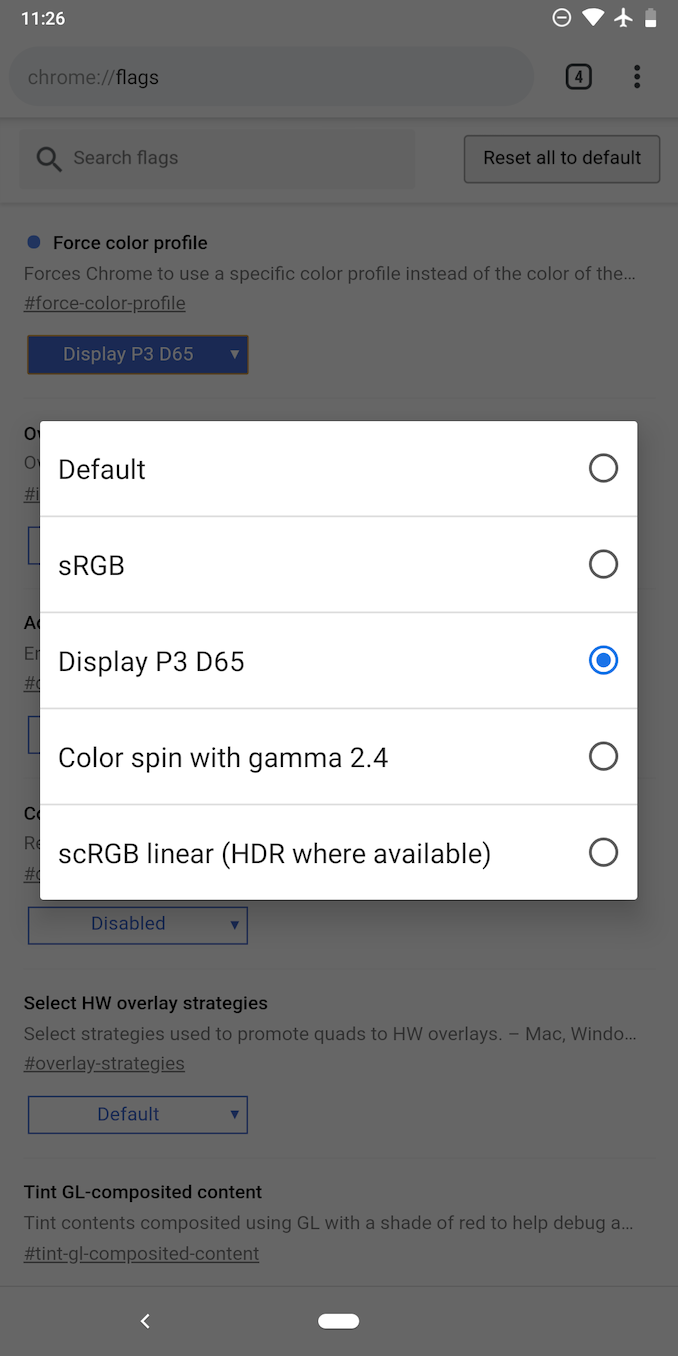 There is one way to bypass this issue, and that is to explicitly tell Chrome to override the default provided system colour profile and just tell it the display is Display P3. This enables colour management in the app, and short of writing a custom application, is the only way to get wide colour gamut content to work on the Pixel 3. 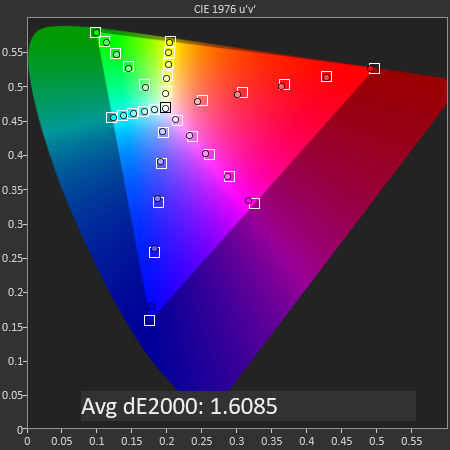 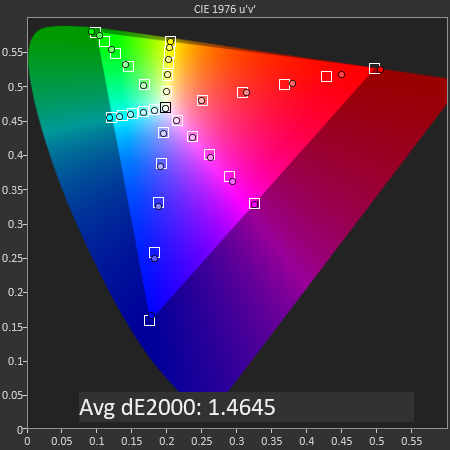 SpectraCal CalMAN
Display P3 in "Natural" and in "Boosted"

Now one of the big questions I’ve had this year is how the CMS would interact with the actual display colour profiles in the settings. Fortunately, it’s pretty straightforward: The “Natural” mode isn’t per se a colour gamut selection, is just an actual category which has both accurate sRGB and P3 display modes via the CMS.

Testing out the Display P3 targets, the Pixel 3 showcases a good dE2000 result of 1.6. The display didn’t score better because seemingly the blue spectrum isn’t fully hitting the target saturations, something that also happened in the sRGB targets. Testing the P3 targets in the “Boosted” mode, we see again what is happening is that this mode just linearly increases the saturations. The blues are nearer to the P3 targets but all other colours overshoot the P3 target now. 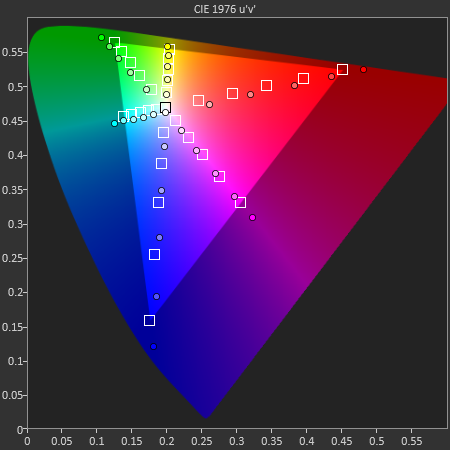 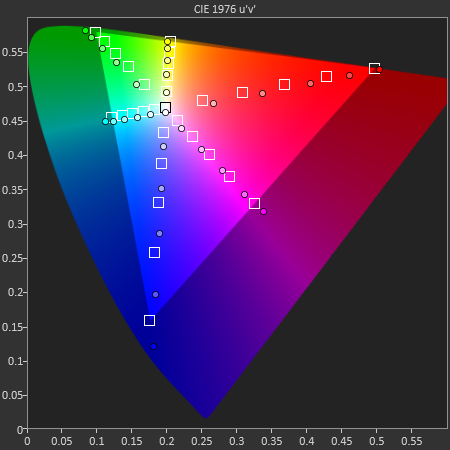 Now the fun thing is testing what happens with the sRGB and Display P3 images when you’re in “Adaptive” mode. sRGB obviously is quite a disaster – I didn’t manage to match this resulting gamut to any existing standard so there’s no real point in measuring an error rate. Now what is really interesting is to see the CMS expand the resulting visible gamut with the P3 images – here we’re seeing something that is far wider than Display P3, especially in the blues. Again this doesn’t really match any standard gamut, so there’s no point in making direct comparisons. 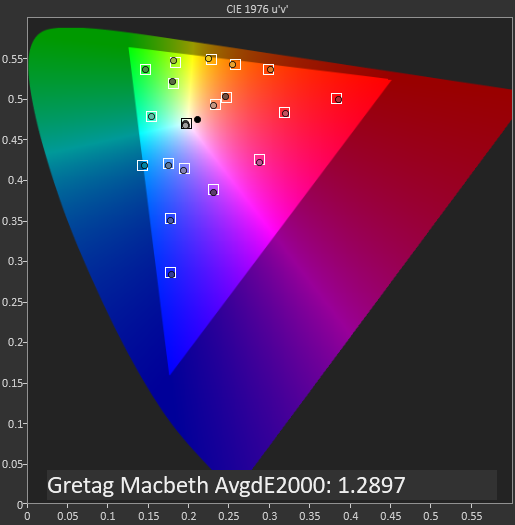 The GretagMacBeth colour test in natural mode results in accurate colours with a dE2000 of 1.28.

One of the reasons I want to switch to full 256 level greyscale testing is to better show case the luminance behaviour, specifically highlighting the issue of “black clipping”.

The Pixel 2 XL, along with the LG V30, suffered very badly from black clipping at low brightness levels. I generally attribute this to the fact that those generation panels just used the DDIC’s ADC bit-depth for both colour representation as well as brightness control. Samsung OLEDs use PWM on top to control brightness by just adjusting the duty level – with voltage of the pixels determining the colour intensity. The Pixel 2 XL and V30 seemed to lack sufficient range to cover the level-spectrum at the low-end, and this resulted in notorious black clipping.

At minimum brightness, the Pixel 3 improves over the Pixel 2 XL in this regard, but it’s still pretty terrible as it’s clipping 15% of levels to black, as opposed to 25% of the Pixel 2 XL.

The higher the brightness, the less pronounced the issue is. At 200 nits compared across the Pixel 3, Pixel 2 XL, S9+ and an iPhone XS, we see that all of the Android phones are clipping the first few greyscale levels to black, with Apple being the only manufacturer able to perform excellently in this regard.

Also one thing that becomes evident when doing full-scale 256 level measurements is the fact that the Pixel 3 colour balance across levels is very haphazard, and we see quite a zig-zagging behaviour between the intensities at different levels, also represented by the dE2000 results. In absolute terms, this shouldn’t be an issue as overall the error rate is acceptable, however it’s a stark behavioural contrast to any other phone I’ve measured before.

Overall, the Pixel 3’s screen is an improvement over the Pixel 2 XL, however it doesn’t fully solve the low-brightness issues that are plaguing LG’s OLED panels, and Samsung panels such as on the Pixel 2 are still better this this regard.

In terms of colour accuracy, the Pixel 3 performs well. Here I would have hoped that Google would have gotten wide colour gamut support fully working within its applications – currently the only way to get this to work is to change a Chrome settings flag, and this only solves the problem for Chrome, and no other app.

Lastly, the display brightness is good, however again it’s just adequate at up to 400 nits, and fails to compete with super bright displays from competing flagships.