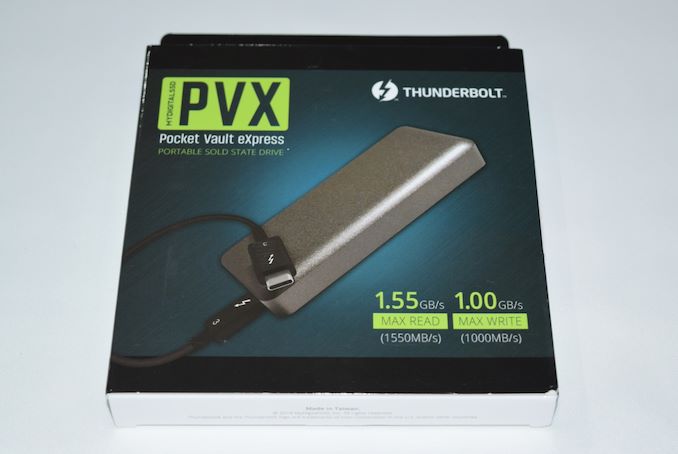 The emergence of NVMe SSDs in the compact M.2 form-factor, along with the increasing popularity of Thunderbolt 3, has enabled a new class of portable high-performance flash storage devices. Within this product category, we have the premium range using PCIe 3.0 x4 SSDs and the budget-friendly options using PCIe 3.0 x2 SSDs. Wallet-friendly choices are emerging, thanks to Phison's 3D TLC-based low-cost reference design. We have already reviewed the Patriot Evlvr in this category. MyDigitalSSD has its own take on this design in the Pocket Vault eXpress (PVX) - adopting the same hardware, while using the firmware from the MyDigitalSSD SBX in the internal SSD. This review presents our in-depth evaluation of the MyDigitalSSD Pocket Vault eXpress (PVX) 1TB version.

The MyDigitalSSD PVX is a 90mm x 45mm x 12mm gray-colored external SSD with an aluminum chassis. It sports a single Thunderbolt 3 interface for both power and data. The port is enabled by the Intel JHL 6340 Thunderbolt 3 Controller - note that this belongs to the Alpine Ridge family, and hence, works only with Thunderbolt 3 Type-C ports. On the other side of the JHL6340 is a PCIe 3.0 x4 connection that leads to a M.2 slot capable of accommodating M.2 2260 or 2280 PCIe SSDs. There are no plastic components in the chassis. The chassis also incorporates thermal pads for the the M.2 SSD. Note that the previously evaluated Patriot Evlvr incorporated a thermal pad for the Thunderbolt 3 controller as well. However, that is not present in the PVX.

Despite the main board supporting a PCIe 3.0 x4 SSD, the PVX uses a PCIe 3.0 x2 NVMe SSD. As the photographs in the gallery above show, the SSD uses a Phison PS5008-E8 controller. The stick includes four flash packages (Toshiba BiCS 2 64-layer 3D TLC flash), along with 512MB of DDR3L DRAM.

CrystalDiskInfo provides some insights into the internal SSD

We note that the drive supports NVMe 1.2, and get confirmation that the SSD is only a PCIe 3.0 x2 device. Even though CrystalDiskInfo puts only SMART in the features section, we did see support for TRIM. The Thunderbolt link is essentially invisible to the tool, with NVM Express listed as the interface. For all practical purposes, the MyDigitalSSD PVX is a PCIe 3.0 x2 NVMe SSD in the system.

Evaluation of DAS units on Windows is done with the testbed outlined in the table below. For devices with a Thunderbolt 3 (Type-C interface) connections (such as the MyDigitalSSD Pocket Vault Express (PVX) 1TB that we are considering today), we utilize the USB 3.1 Type-C port enabled by the Intel Alpine Ridge controller. It connects to the Z170 PCH via a PCIe 3.0 x4 link.

MyDigitalSSD claims read and write speeds of 1550 MBps and 1000 MBps respectively, and these are backed up by the ATTO benchmarks provided below. Unfortunately, these access traces are not very common in real-life scenarios.

CrystalDiskMark, despite being a canned benchmark, provides a better estimate of the performance range with a selected set of numbers. As evident from the screenshot below, the performance can dip to as low as 36 MBps for random accesses at low queue depths. Fortunately, those types of workloads are rare for common direct-attached storage use-cases. 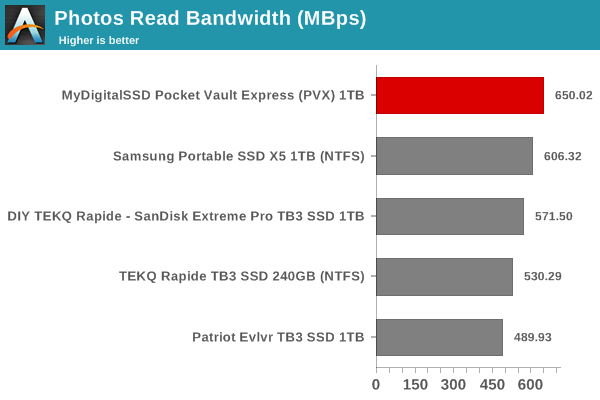 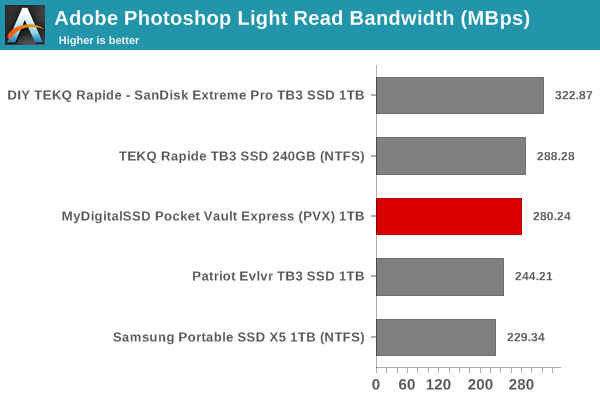 For short workloads, the PVX actually performs as good as some of the PCIe 3.0 x4 NVMe SSDs. It moves to the middle of the pack in the extended workloads. However, in most cases, we see it doing quite well compared to the Patriot Evlvr.

The PVX has no trouble in keeping the internal SSD temperature below 60C even under sustained loading conditions. The consistency shown in transferring real-world data (actual photos, videos, and document files) into the drive is remarkable, pointing to the extensive use of the available DRAM cache compared to the firmware in the Patriot Evlvr.

The performance consistency for real-world applications was looked at in the previous section. We recently added a test to determine the effectiveness of the thermal solution for sustained workloads. After deleted the SSD volume, a fio workload was set up to write sequential data to the raw drive with a block size of 128K and iodepth of 32 to cover 90% of the drive capacity. The internal temperature, instantaneous write data rate, and total amount of data written in total till that point of time were recorded.

The temperature in this extreme test-case does go up to 68C. There are no signs of thermal throttling, as the write rate stays just south of 700 MBps after the initial SLC cache runs out. The consistency in this 'direct write to TLC segment' is also quite good.

The PVX has a SLC cache of around 3 - 4 GB, which, in our opinion, is a bit small for a 1TB device. On the other hand, the PVX does expose 1024GB of space to the OS, like the Patriot Evlvr - Windows Explorer shows around 954 GB of usable space after formatting, compared to the 931 GB shown for SSDs such as the Samsung X5 and our DIY TEKQ + SanDisk Extreme Pro configuration.

The MyDigitalSSD PVX is a bus-powered device. Given its Thunderbolt 3-only nature, it can potentially consume up to 15W. It is still relevant to take a fine-grained look at the power consumption profile. Using the Plugable USBC-TKEY, the bus power consumption was tracked while the CrystalDiskMark workloads were processed. The workloads were set up with an interval time of 30s.

The worst-case power consumption for the PVX 1TB version seems to be around 5.5W, and the device idles around 2.8W. The power consumption peaks are similar to the Patriot Evlvr, but the idling power is a full 1W higher. As such, power-efficiency is not a strong point of the PVX - even the PCIe 3.0 x4 external SSDs consumer less energy at idle.

MyDigitalSSD is known for delivering products with great performance at attractive price points. The PVX is no different. At launch, the product was priced around $40 lower than the Patriot Evlvr. Since then, the prices have tended to fluctuate wildly. The graph and table below present the current scenario for the pricing aspect. 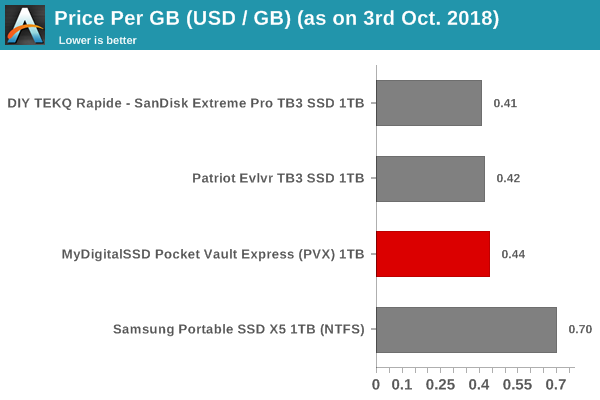 It must be noted that our DIY configuration still delivers the best performance per dollar - the only drawback is that it is not a ready-to-go out of the box solution, and the consumer ends up with a spare 240GB SSD.

Between the Patriot Evlvr and the MyDigitalSSD PVX, the choice is a bit more difficult, as the pricing difference / relative positions in the above table have tended to shift around. Assuming that the cost is not a significant factor, the good performance numbers might tilt it in favor of the PVX, particularly for desktop-only use-cases where the idling power is not an issue. Both devices do not have any hardware encryption capabilities with value-added software like the Samsung X5. However, the pricing makes up for it. The real competition for devices such as the Patriot Evlvr and the MyDigitalSSD PVX comes in the form of bus-powered USB 3.1 Gen 2 to NVMe storage enclosures such as the MyDigitalSSD M2X which deliver equivalent write performance. We will be taking a closer look at the M2X in the coming weeks.