The fourth and final Supermicro board from the quadruplet of Z390 motherboards is the smaller sized C9Z390-CG-IW. The C9Z390-CG-IW as the name suggests takes a lot of the important elements from the ATX sized C9Z390-CG and puts it in a mini-ITX sized frame. There is a full-length PCIe 3.0 x16 slot with steel slot reinforcement and the board also includes two PCIe 3.0 x4 M.2 slots; one on the front and one on the rear. Also included are four SATA ports which feature straight-angled connectors. 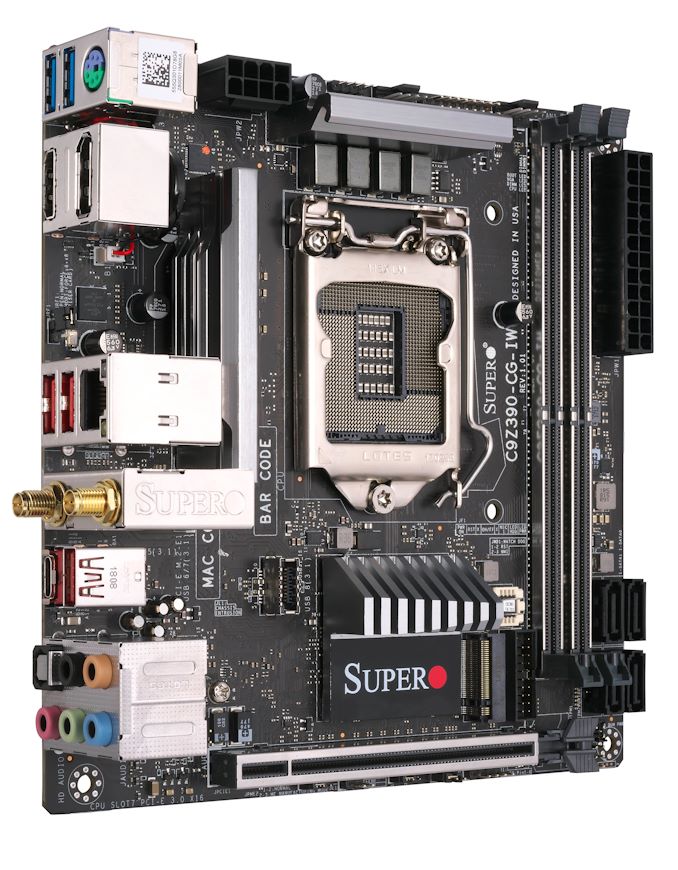 Usually with mini-ITX motherboards, one of the minor benefits is faster memory support due to the shorter tracks, but Supermicro is advertising the C9Z390-CG-IW to support up to DDR4-3866 which is the same as the other models barring the C9Z390-PGW which offers up to DDR4-4133.  The C9Z390-CG-IW also looks to have just two 4-pin fan headers which are, unfortunately, one of the pitfalls with the mini-ITX form factor; less space usually means fewer features and headers.

Controller wise the board is using a Realtek ALC1220 HD audio codec to power the five 3.5 mm audio jacks and S/PDIF optical output on the rear, an Intel I219V Gigabit controller for the single LAN port and a dual-band 802.11ac wireless networking adapter is also included. The rest of the rear panel is comprised of three USB 3.1 Gen2 Type-A, one USB 3.1 Gen2 Type-C, two USB 3.0 Type-A ports, a PS/2 combo port and a pair of display outputs consisting of a DisplayPort 1.2 and HDMI 2.0 ports.

The Supermicro C9Z390-CG-IW is the smallest of the four Z390 SuperO series motherboards and is designed to retain the similar power, performance and feature characteristics of the C9Z390-CG, but in a more compact mini-ITX frame. Most of what has been said looks to be true, but the obvious pitfalls come with a smaller and seemingly lower specification power delivery. This model does however retain the single 8-pin 12 V ATX CPU power input and the specifications indicate the same TDP support with up to a maximum of 120 W officially support from the CPU. The pricing and availability of the C9Z390-CG-IW is yet to be announced.