The Supermicro C9Z390-CG and the more expensive C9Z390-CGW seemingly have the same PCB layout which could indicate that both PCB boards are identical in terms of specification, but with this model having less in the way of controllers etc. Aesthetically the CG drops the use of a rear panel cover with metallic grey power delivery heatsinks and a black/grey chipset heatsink. The other key difference is that the C9Z390-CG completely drops RGB support with no integrated LEDs or headers onboard at all. On the storage side of things, the C9Z390-CG has two PCIe 3.0 x4 M.2 slots and also includes a total of six SATA ports. 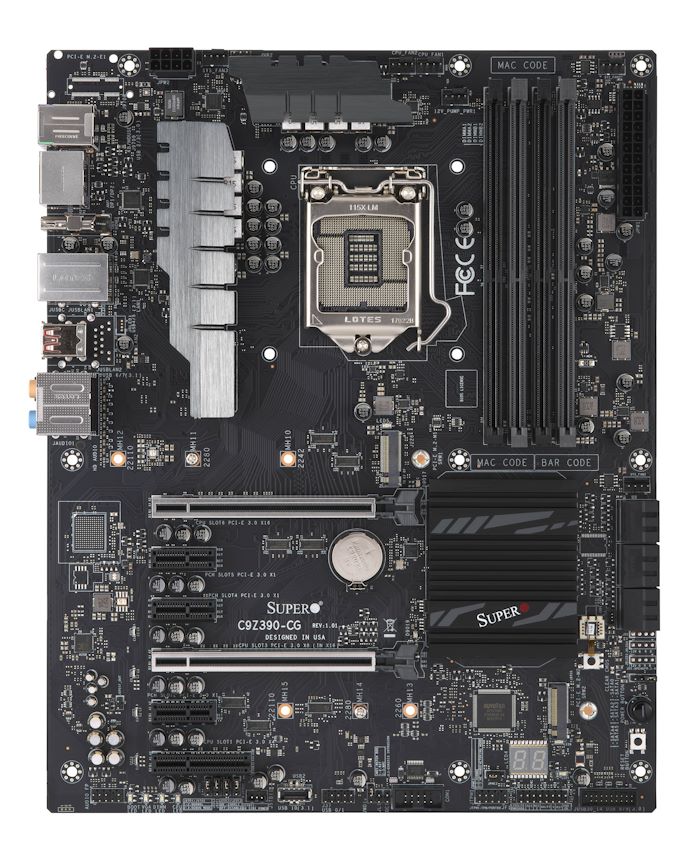 The C9Z390-CG has a total of four RAM slots with support for DDR4-3866 and up to 64 GB in total. On the PCIe front, the board has two full-length PCIe 3.0 slots which operate at ether x16/x4 with the bottom PCIe 3.0 x4 slot populated at the bottom and/or x16/x8 and the bottom slot is disabled when the second full-slot is in use. Separate to the these is a total of three PCIe 3.0 x1 slots.

Compared to the more feature-rich and more expensive C9Z390-CGW (on the previous page), the C9Z390-CG has the same layout minus one of the dual LAN and instead opts for a single Intel I219V Gigabit LAN. The USB ports included on the rear panel consist of three USB 3.1 Gen2 Type-A, one USB 3.1 Gen2 Type-C and two USB 3.0 Type-A ports. The onboard audio which consists of five 3.5 mm audio jacks and an optical S/PDIF output is controlled by a Realtek ALC1220 HD audio codec and the C9Z390-CG also has a trio of video outputs with two DisplayPort 1.2 and a single HDMI 1.4 port.

The Supermicro C9Z390-CG pricing as it stands is currently unavailable. The target market is gamers on a budget and offers a more cost-effective and solid feature set without passing the cost of flashy RGB and unnessacary visually pleasing covers with the primary focus being on the performance.