The SuperO C9Z390-CGW is an ATX sized model which is targeted towards gamers looking to utilize some of the more premium features as the PGW model, but with some obvious cutbacks. The C9Z390-CGW has two full-length PCIe 3.0 slots which operate at ether x16/x4 with the bottom PCIe 3.0 x4 slot populated at the bottom and/or x16/x8 and the bottom slot is disabled when the second full-slot is in use. bottom. Sandwiched in between the full-length slots are three PCIe 3.0 x1 slots with a pair of M.2 PCIe 3.0 x4 slots with heatsinks also among the PCI. Other storage options include six SATA ports with support for RAID 0, 1, 5 and 10 arrays. Memory support is slightly lower than the PGW with the CGW supporting up to DDR4-3866 and up to a maximum capacity of 64 GB across four available slots. Like the flagship PGW model featured above, the CGW also features five 4-pin fan headers with one of the headers being designated to water cooling pumps. 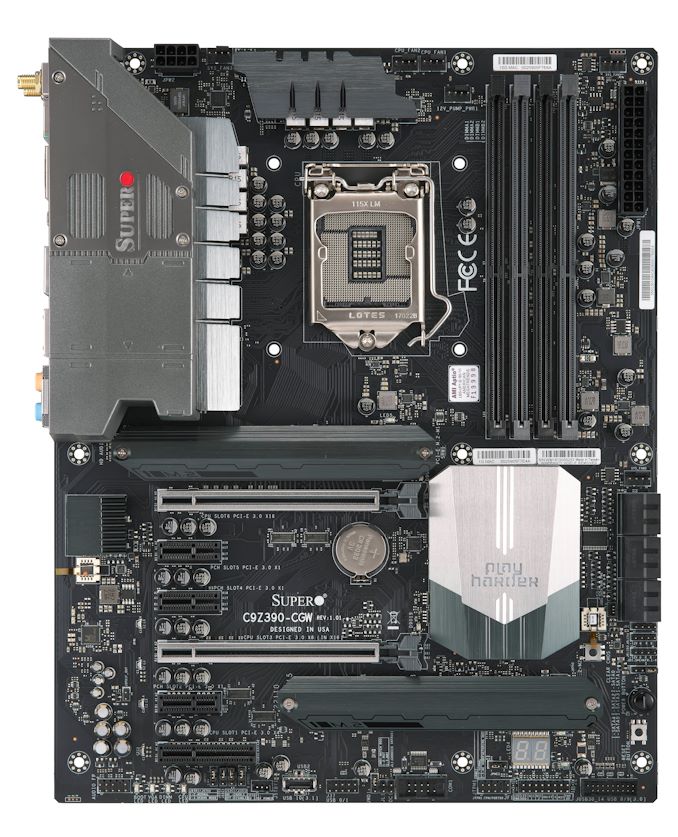 On the rear panel of the C9Z390-CGW are three USB 3.1 Gen2 Type-A ports with an additional Gen2 Type-C port and two USB 3.0 Type-A ports making up the rest of the USB connectors. A total of two LAN ports are present with one coming via an Aquantia AQC107 10G NIC with the other being controlled by an Intel I219V Gigabit chip. The five 3.5 mm audio jacks and S/PDIF optical out are powered by a Realtek ALC1220 HD audio codec and the board also includes a PS/2 combo port, two DisplayPort 1.2 outputs, a single HDMI 1.4 output and two antenna connectors for the included 802.11ac dual-band Wi-Fi adapter; this also provides users with Bluetooth 5 connectivity.

The Supermicro C9Z390-CGW takes certain elements of the flagship C9Z390-CGW such as 10G Aquantia networking, dual-band 802.11ac Wi-Fi connectivity with two full-length slots offering x16 bandwidth on both for unrestrictive bandwidth when running two-way CrossFire and SLI setups; it's quite likely the bottom PCIe 3.0 x4 shares bandwidth with the M.2 slots. The C9Z390-CGW slots right underneath the more comprehensive PGW, but as of yet initial pricing is currently unknown.