Most users can give the HyperX Fury RGB SSD an immediate pass due to using a laptop or one of the vast majority of desktop cases that don't allow for showing off an illuminated SATA SSD. For users who are putting together a fully-illuminated build to show off, the Fury RGB's dark gray case can blend in with most surroundings and leave the drive's LEDs to add an accent to what might otherwise be a bare spot in the computer. 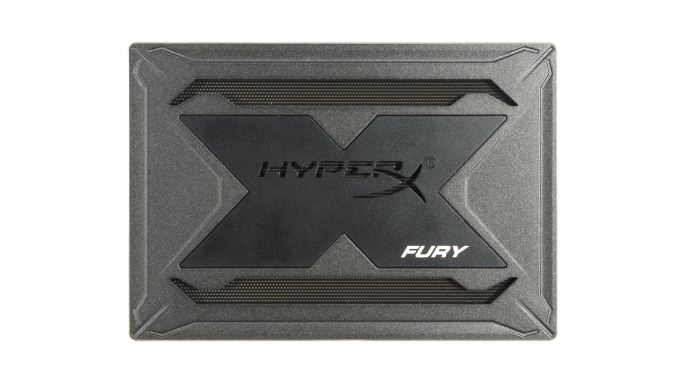 When it comes to actual storage duties however, the Fury RGB is not as versatile, and the LED lighting itself is responsible for most of the drive's problems. The LED lighting on the Kingston HyperX Fury RGB SSD drives up the price of this SATA SSD to NVMe levels and draws enough power to make the drive more prone to overheating than almost any M.2 NVMe SSD out there—and we tested with only one of the three color channels illuminated! Kingston's design for this drive uses probably twice as many LEDs as necessary to provide the backlit logo and narrow highlights, though a lot of light is blocked as it passes through the translucent plastic diffuser sheet and metal grating.

Kingston's inclusion of a large thermal pad between the metal case and the SSD components probably helps keep the overheating from being a catastrophic problem, but the real problem is the pile of 75 RGB LED modules on the back of the PCB. Kingston should have opted for a thicker drive case that allowed for either a better diffuser solution that blocks less light, or permitted the LEDs to be isolated and insulated from the SSD.

Since the Fury RGB uses the 12V power supply for the LEDs and the 5V supply for the SSD side of things, we are able to analyze the power efficiency of just the storage portion of the drive in isolation from the LED power draw. Even here the Fury RGB comes up short, likely due in part to increased leakage currents caused by the drive's high operating temperature.

The HyperX Fury RGB's performance on our benchmark suite is disappointing. It usually maintains a clear performance lead over entry-level DRAMless SATA SSDs, but the Fury RGB has the internals of a mainstream SATA drive and fails to perform at that level. Kingston's own entry-level NVMe SSD offers much higher performance at lower prices. The only way the HyperX Fury RGB makes sense in a high-end enthusiast build is if it is complemented by the inclusion of a faster but probably unobtrusive NVMe SSD. In a more modest build that does not need the highest performance storage, the Fury RGB does still provide a huge performance advantage over hard drives, but there are still better performing drives for the price.

They HyperX Fury RGB is not the only SATA RGB SSD option on the market. We will have a review of the Team Group T-Force Delta RGB SSD very soon. It's a bit cheaper than the Fury RGB and takes a very different approach to the lighting. But both are still much more expensive than good mainstream SATA SSDs that outperform the Fury RGB across the board. And at the same price level as the RGB SSDs, there are some very nice NVMe options.

Ultimately the HyperX Fury RGB seems to have been designed as a lighting solution first and an SSD second. And in that respect it would seem to be doing what Kingston set out to do. But unless you really want that lighting, as an SSD there are better options out there.