The B450M-HDV features an microATX form factor and has a pairing of Realtek controllers to take care of the onboard audio solutions and networking capabilities. The B450M-HDV also represents the base B450 model from ASRock with a few of the bells and whistles associated with ASRock’s other models with the aim to shave as much from the overall cost as possible. The design across the entirety of the board is plain, with little attention to the aesthetic. ASRock takes advantage of as much as it can from what is integrated onto the board chip wise. 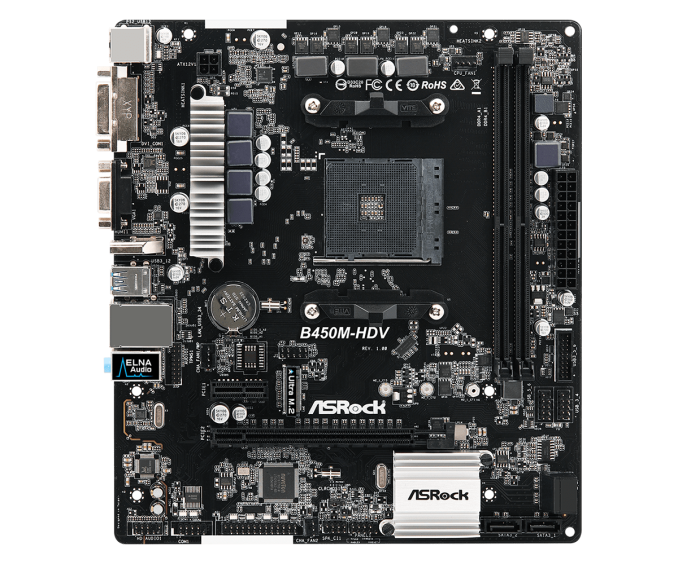 In terms of PCIe support, the B450M-HDV has a single full-length PCIe 3.0 x16 slot with a single PCIe 2.0 x1 slot located just above this. This particular microATX board supports up to 32 GB of DDR4-3200 memory. Storage on the B450M-HDV is provided by four SATA 6 Gbps ports with two of them having right-angled connectors, and the remaining two featuring straight angled ports. A single Ultra M.2 slot is also present with support for both PCIe 3.0 x4 and SATA capable SSDs.

The power delivery looks to consist of 7-phases with them being split into a 4+3 configuration. The B450M-HDV is also the only board from the launch models of any brand on the B450 chipset to feature a single 4-pin 12 V ATX power input; a 24-pin ATX motherboard power input is also present. While the power delivery would seem sufficient for general use, the power delivery heatsink looks a little on the bare side and it wouldn’t be advisable to do too much overclocking on this model as VRM temperatures could be a potential problem.

The ASRock B450M-HDV represents good value for money with an expected price of $69.99 at launch depending on retailer. The inclusion of a 'good value' Realtek ALC887 audio codec and Realtek RTL8111H Gigabit networking controller shows that users looking to avoid spending extra money on fancy aesthetics and more of the budget on actual sustenance which will have a bigger bearing on actual performance than fancy naming schemes.